Pediatricians back away from screen use guidelines 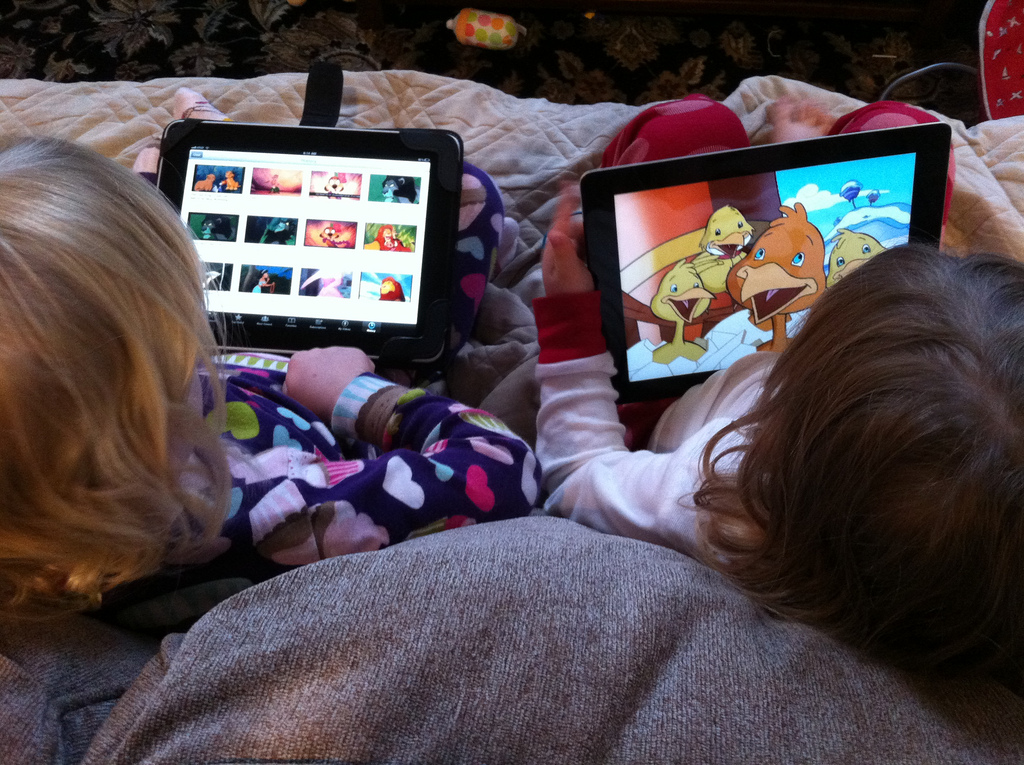 This piece originally appeared in the Providence Journal on December 9, 2015.

The American Academy of Pediatrics has long advised parents to keep children under age 2 away from video screens, and to limit older children to two hours of screen time per day. The thinking has been that children deluged with video are less likely to get the proper cognitive, social and emotional development that comes from non-video play and interaction with real human beings.

Volumes of research support the need to keep kids from becoming video sponges, regardless of whether that video comes from a television, video game or computer screen. Children who spend the most time in front of screens are generally less socially capable, less physically fit and less successful in school than their low-media peers.

That’s why it is so puzzling to see the AAP indicate it is backing away from those long-held guidelines regarding screen time and kids. An essay published in a recent AAP newsletter promises new guidelines to be released in 2016. The essay, written by three AAP doctors, points out that current AAP advice was published before the proliferation of iPads and explosion of apps aimed at young children. It goes on to argue, “In a world where screen time is becoming simply ‘time,’ our policies must evolve or become obsolete.” Another casual observation is that “media is just another environment.”

The AAP article further explains its planned updates, writing, “The public needs to know that the Academy’s advice is science-driven, not based merely on the precautionary principle.” That all sounds quite lofty. But ample, rigorous research already demonstrates that heavy screen exposure for kids links with a variety of social and cognitive difficulties. Precautionary advice is even more imperative in today’s media-saturated environment.

Beyond what can be learned from science-driven research, just check in with any second grade teacher and ask that teacher which students have the most difficult time focusing in class. Odds are those struggling students get too much screen time at home. Ask high school guidance counselors which students are most depressed and anxious, and you will find those teens are more likely to be heavy users of social media and/or video games.

It is true that children are more saturated in media than ever, and parents have a near impossible task to control and referee media absorption by their kids. As the AAP reports, almost 30 percent of children “first play with a mobile device when they are still in diapers.” Teenagers, of course, are constantly absorbed in electronic devices.

It is also true, as the AAP points out, that the screen-time guidelines have been in place for many years. So, too, have been recommendations against teens smoking cigarettes, but nobody is suggesting teen smoking is now acceptable. Commonsense guidelines should not be considered “outdated,” no matter how old they are.

The AAP is a highly respected professional organization that surely wants what is best for children. The recent AAP essay correctly points out the importance of parents monitoring kids’ media consumption, keeping technology away from mealtime and out of bedrooms, along with other solid advice. But it is not helpful to suggest that the world is now so media driven that parents must concede defeat to the media tidal wave on kids. Instead, the AAP can give parents the backbone and rationale needed to limit screen time and, indeed, just turn the devices off. To say screen time is just “time” is a surrender to an “anything goes” mentality in which tough judgments are avoided.

Media use is, of course, only one of many factors that influence a child’s overall environment. It is clear, however, that media-created worlds don’t effectively replace healthy human interaction. Every minute a child is in front of a screen reduces time for more productive activities, such as playing with others, outdoor recreation, exercise or creative play. Thus, even when kids are consuming educational video content, they are missing out on more useful, human endeavors.

When the AAP issues its formal recommendations next year, here’s hoping the Academy doesn’t take a “What’s the use?” approach, and instead, gives parents the stern warnings needed to help raise well-adjusted kids who use media sensibly.