Time to Give NFL’s Blackout Rule the Boot 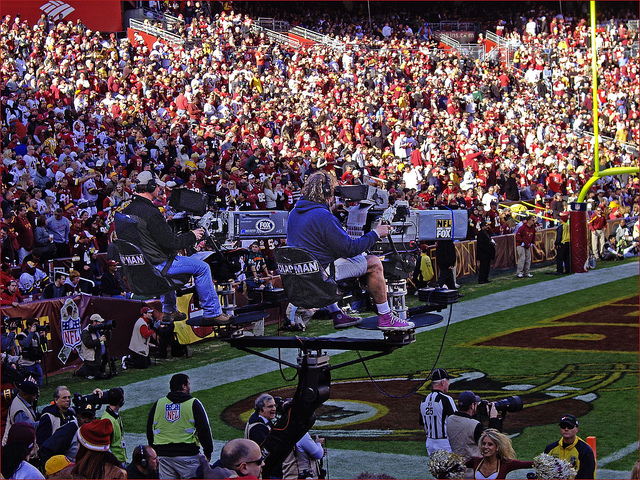 NFL on Fox TV Cameraman by Ron Cogswell (CC BY 2.0)

Originally appeared in The Indianapolis Star

The Federal Communications Commission is supposed to ensure that the electronic media serve the public interest. A current FCC rule, however, works primarily to serve the interests of a few of America’s wealthiest individuals. That’s why the FCC appears poised to end its blackout rule for National Football League games.

For many years, NFL television contracts have prohibited the broadcast of any game in a local market in which the stadium is not sold out. The NFL wants to guarantee the revenue stream that sold-out stadiums provide, even though some economists claim there is no connection between broadcasting games in the home market and fan attendance.

The FCC decided in 1975 to support the NFL’s local blackouts by also prohibiting cable or satellite services from importing broadcasts of those games. Thus, the NFL, which already has anti-trust protection from the government, also has had FCC collaboration in preventing fans from seeing their hometown teams on television.

Late in last year’s football season, acting FCC chair Mignon Clyburn proposed getting the commission out of the sports blackout business. Clyburn questioned whether the blackout rules were in the public interest, “particularly at a time when higher ticket prices and the economy make it difficult for many sports fans to attend games.”

FCC commissioner Ajit Pai had even stronger words against the rule in a speech last month in Buffalo: “I don’t believe the government should intervene in the marketplace and help sports leagues enforce their blackout policies. Our job is to serve the public interest, not the interests of team owners.”

The location of Pai’s speech is noteworthy. The Buffalo Bills’ games have been blacked out more often in recent years than any other NFL team. By the way, it’s often bitterly cold outside when late season games in Buffalo are played. And the Bills haven’t had a winning season since 2004.

Current FCC chair Tom Wheeler also has announced his opposition and will call for a vote to discontinue the blackout provisions at a meeting later this month.

The NFL faces fourth and very long in its efforts to keep the rule, but that hasn’t kept it from a massive lobbying and public relations effort, complete with scare tactics and half-baked reasoning. The NFL, for example, has enlisted the National Association of Broadcasters to threaten that elimination of the FCC rule could lead to all games being telecast only on pay services, not free over-the-air channels. In fact, that could happen only if the NFL itself chose to move in that direction.

The NFL also has gotten the support of the Conference of State Legislatures and the Congressional Black Caucus to claim that elimination of the rule would hurt local economies by keeping fans away on game days, thus harming stadium employees, nearby restaurant owners and so forth. The reality is that stadiums fail to sell out when teams lose too often or inclement weather interferes. The FCC blackout rule doesn’t fix either of those problems.

The NFL generates about $10 billion a year in revenue, with the biggest chunks from television contracts and merchandise. Ticket sales aren’t as big a factor as in 1975. The NFL money machine generated $275 million in new revenue this fall by signing CBS to air eight Thursday night games. That should be more than enough to cover a few empty seats in Buffalo in December.

Virtually all NFL owners are billionaires. Meanwhile, television ratings hinge on the eyeballs of millions of fans who can’t afford to pay high prices to attend a game, many of which are played in stadiums built with taxpayer money. It is high time for the FCC to end this 40-year losing streak and win one for the fans.