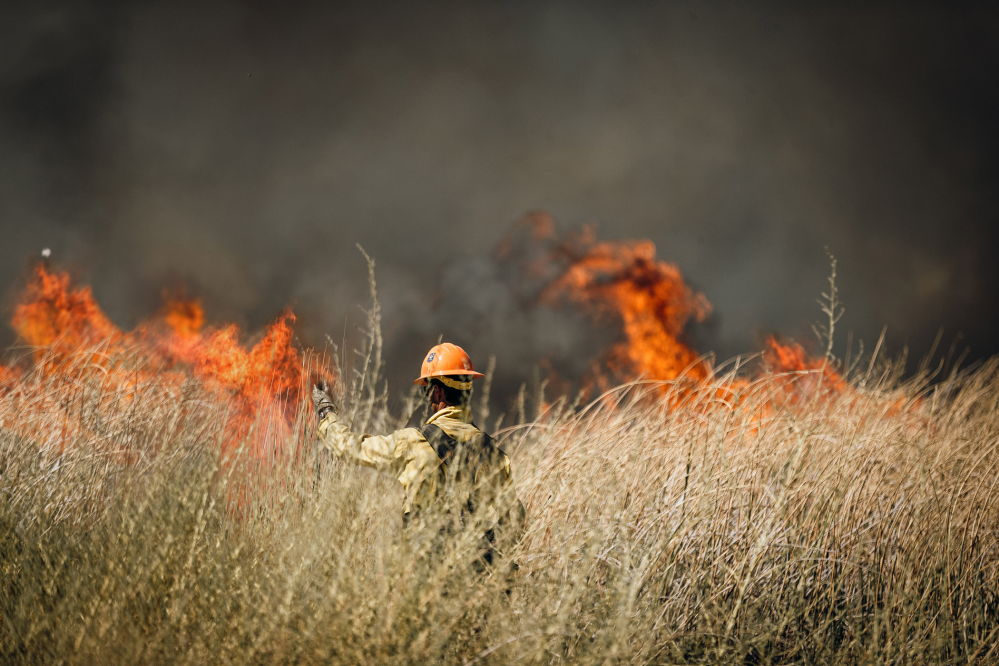 As around a dozen wildfires continue to grow in California, the smoke has reached Nebraska. The two major wildfires that are occurring in Northern California are the second- and fourth-largest fires in state history. The status of Big Basin Redwoods State Park, California’s oldest, is changing daily. The oldest trees have seen many fires, but the current threat has been particularly devastating. California Governor Newsom has asked for help from as far away as the east coast of Australia in order to gather more firefighters.

Reaching out so broadly is a result of how central the issue of sufficient firefighters has become. State prison officials shared at a press briefing that due to COVID-19 quarantining and early release measures, California was unable to use its usual contingent of incarcerated firefighters during this year’s wildfire season.

The failure to address land management issues and the increasingly dire effects of climate change have led to the disastrous fire seasons both this year and in the recent past. However, the reliance on dangerous work being done by underpaid and under-protected incarcerated people in order to ensure the safety of others and conserve precious resources is a part of a systemic trend.

The US has more people in prison — in absolute numbers as well as by percentage of the population — than any other country on earth. This statistic alone should give us pause and encourage us to reflect on the purpose of isolating such a large amount of our population. But this year, our handling of the pandemic and, now, these wildfires highlights further issues with mass incarceration, beginning with the justification for imprisoning so many members of your population in the first place.

Society could be aiming at a few different goals when it takes people from society and places them in prison for violating the law. One goal might be sanctioning citizens that have “harmed” society based on a somewhat loose notion of “just deserts”: the individual has done wrong so they deserve punishment, and isolation is seen as the appropriate form of that punishment. Other justifications of incarceration as punishment are based on deterrence: by isolating someone who violates the law, we hope to make it less likely that this person or others — who are aware of the incarcerating policy — will do so again in the future. Incarceration could also be construed as means to rehabilitate someone who has not performed to the standards that the law suggests society deems necessary. In this case, the isolation is supposedly meant to be a constructive time to become able and willing to conform to societal standards more adequately in the future. Finally, incarceration could be a way of isolating someone from society to prevent further harm. (A version of justice that doesn’t fit this model is “restoration,” which focuses on the effects of violating a statute and allows those harmed by the violation to initiate a process where there is opportunity to share concerns, make amends and future plans, and potentially forgiveness, in hopes of healing the part of society that was in fact impacted by the violation).

Most regard the standards for our penal system to be a mix of these goals. A prison sentence might make sense as a mix of deterrence and rehabilitation in a particular case of sentencing, or in the mind of a particular legislator. When considering the labor that those who are serving sentences in prison perform, however, the justification for their punishment plays a crucial role in determining what conditions are appropriate.

Those in favor of the starkly different working conditions for non-incarcerated employees and prison labor use a variety of explanations. Appeals to the need to maintain facilities and rationale of providing job training for people who eventually will “reenter society” are the strongest justifications for employing incarcerated people. However, from these considerations, the working conditions and pay structure that exist today in US prisons do not follow. From the justifications for incarceration as a form of punishment, it is unclear why the human rights protections that guarantee safe working conditions and fair wages would be forfeited along with the freedom of movement that the punishment itself constitutes. For rehabilitation purposes, working while in prison can aid the transition once released, but differentiated pay scales and lax safety protocols appear punitive and demand human rights attention. For the retributive (“desert”) model, the presumption that someone deserves worse or inadequate working conditions on the basis of being incarcerated would need to be considered along with their original sentencing.

Further, the working conditions and wages that make up the structure of prison labor create a market designed to exploit the incarcerated. People in government-run correctional facilities perform jobs that are necessary for the prison to function, but do so without labor protection or the possibility of unionizing. And they do so for a fraction of what those performing the same tasks outside of prisons would earn. As a prison laborer, often the guarantee of safe working conditions simply does not apply.

The disparities in pay and working conditions for incarcerated employees creates an exploitative market, where prisons are incentivized to keep costs low and private businesses can reap great benefit. This economic structure does not simply exploit a marginalized incarcerated population, but, given the structural racism in the US justice system, further imbalances racial inequalities in a society already saturated by racist institutions.

Further, there are a variety of incarcerated employees who perform manufacturing jobs outside the prison, manufacturing products that are sold to government agencies and corporations. This work can include answering calls in a phone bank, constructing furniture, warehouse work, farm work, and, in California, front-line firefighting. The fire season and the pandemic have laid bare the living and working conditions in our prisons.

Throughout the pandemic, the cramped living conditions and poor quality of healthcare have put prisons at particular risk of experiencing a COVID-19 outbreak. Calls to attend this heightened danger have been neglected throughout the national emergency. In California, the nature of the pandemic has led to shutdowns across many of the prisons, making the incarcerated firefighters unable to respond to fires.

What this has meant for this record-breaking year in California is that they cannot rely on the state’s “primary firefighting ‘hand crews.’” According to the Sacramento Bee, “Inmate crews are among the first on the scene at fires large and small across the state… Identified by their orange fire uniforms, inmates typically do the critically important and dangerous job of using chainsaws and hand tools to cut firelines around properties and neighborhoods during wildfires.”

The owners of the prisons actively market their workers to private businesses, emphasizing the low wages their employers would be able to pay, how many have “Spanish language skills,” and how this labor pool is one of the “best kept secrets.”

In 2018, there was a three-week nationwide strike over the work conditions in prisons. Prisons are paying incarcerated people less today than they were in 2001. Prison jobs are unpaid in Alabama, Arkansas, Florida, Georgia, and Texas, and maximum wages have been lowered in at least as many states. Further, in many states the wages that incarcerated employees earn do not accurately reflect “take-home” pay; prisons deduct fees (like garnished wages) for what prison laborers have cost them during their stay. Because it costs money to incarcerate people, the claim goes, their wages should contribute to the running of the prison. As Vox reports, “Most prisons also deduct a percentage of earnings to help cover a prisoner’s child support payments, alimony, and restitution to victims. But at 40 cents an hour, that seems impractical.”

There is no getting around the fact that hiring incarcerated employees is a cost-saving measure. It’s estimated that the “Conservation Camp Program, which includes the inmate firefighters, saves California taxpayers tens of millions of dollars a year. Hiring firefighters to replace them, especially given the difficult work involved, would challenge a state already strapped for cash.” As the Managing Editor at Prison Legal News told Newsweek, “Prisons cannot operate without prison labor. They would simply be unaffordable.” So, incarceration in its current state requires exploitation and unethical labor practices that we wouldn’t accept outside of prisons, and are inflicting disproportionately based on systemically racist institutions.

There is also the option that doesn’t seem to get enough attention: If incarceration costs so much, wouldn’t it be cheaper to have less incarceration?