Under Discussion: Five Arguments Against the Harper’s Letter 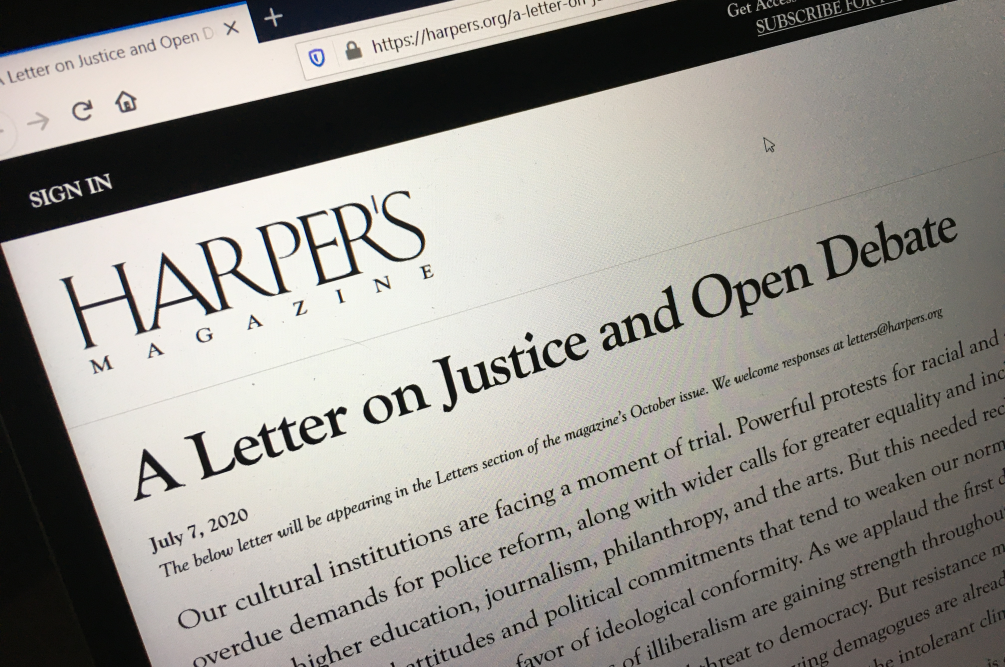 On July 7, 2020, Harper’s Magazine published an open letter warning that “the free exchange of information and ideas, the lifeblood of a liberal society, is daily becoming more constricted” by a set of “moral attitudes and political commitments that tend to weaken our norms of open debate and toleration of differences in favor of ideological conformity.” The letter obliquely refers to several incidents in which, in the eyes of the letter writers, individuals have been subjected to disproportionate or inappropriate social sanction for perceived transgressions against left-wing norms of thought and speech. “Editors are fired for running controversial pieces; books are withdrawn for alleged inauthenticity; journalists are barred from writing on certain topics; professors are investigated for quoting works of literature in class….” Signed by some 150 prominent educators, intellectuals, writers, and artists, the letter provoked a swift backlash by the left-leaning press. That reaction has crystallized around a set of arguments against the letter’s position that I propose to assess in this column.

The first argument, best articulated by The New Republic’s Otisa Nwanevu, is that the moral (and legal) right of free association gives private organizations, including newspapers and private colleges or universities, the right to decide what ideas they are and aren’t interested in promoting and what people they believe will or will not be an asset to them. Hence, no individual has the right to use such an organization as a platform for expressing their ideas, and these organizations, in turn, have no duty to be maximally permissive of ideas with which they disagree. The argument is surely correct that, for example, Tom Cotton had no right to be published in The New York Times, and The New York Times had no duty to publish him. Yet the wrongs that worry the signatories of the Harper’s letter are not, it seems, grounded in these alleged rights or duties. Instead, they are at least in part grounded in the conception of certain types of organization as aiming at certain morally worthy ends. For example, it can be plausibly argued that the role of private colleges and universities, just as much as public ones, is to generate knowledge and serve as forums for debate about pressing political issues. But these commitments seem to ground an obligation to promote debate and discussion. And while this obligation does not require giving a platform to any particular individual or group, it does require giving a platform to some individuals or groups that represent relevant, if ideologically heterodox views. Similarly, in cases of wrongful termination, the idea is not that the organization had a duty to provide a platform for any idea, no matter how offensive; rather, it is that termination of individuals who are not guilty of the offenses of which they are accused is wrongful.

The second argument is that the signatories overplay the importance of a handful of relatively isolated controversies, even if the latter do, in fact, involve wrongdoing on the part of left-wing activists or Twitter mobs. It is undeniable that most critical discussions of progressive identity politics focus on a handful of anecdotes, perhaps mainly because there is no central database of incidents from which to draw. However, the Foundation for Individual Rights in Education (FIRE) does compile large databases of free speech-related incidents and policies on college campuses, including disinvitations, free-speech codes, and so on. Whether these databases, together with the anecdotes, amount to a troubling cultural trend is for the reader to decide.

The third argument, which is even more dismissive than the second, is that the consequences faced by victims of so-called “cancellation” are relatively minor, particularly given the signatories’ elite status; moreover, they are usually deserved. As Jessica Valenti put it in a Medium.com article, the signatories “want to be able to say whatever they want without consequence and paint themselves as the victims even as they wield more institutional and systemic power than anyone criticizing them.” The Atlantic’s Hannah Giorgis agrees, writing that “facing widespread criticism on Twitter, undergoing an internal workplace review, or having one’s book panned does not, in fact, erode one’s constitutional rights or endanger a liberal society.” However, the anecdotes that seem to prompt worries about left-wing censoriousness feature consequences to individuals that go far beyond mere criticism, as the stories of wrongful termination referenced above attest. These individuals are usually not members of the cultural elite. Moreover, undergoing an internal workplace review, which is the outcome of so many of these cases, is very different from facing public criticism; it represents a potential threat to one’s livelihood. To have one’s livelihood threatened because of one’s personal speech is bound to have a chilling effect. Finally, there is a distinction between legitimate criticism of one’s ideas and attacks on one’s reputation or threats to one’s safety, tactics often wielded by social media users on both the left and right. These are serious and often disproportionate forms of social sanction, even when directed at powerful members of society.

The fourth argument is that there are much more pressing threats to free speech upon which the writers of the Harper’s letter ought to have focused their attention, such as violence against journalists, economic threats to journalism and academia, and so on. Logically speaking, this is not really an argument against concern about threats to free speech from the left. To see this, consider the argument that charity X ought to focus more attention on tropical disease Y rather than tropical disease Z, since the former kills five times the number of people. This is not an argument against addressing tropical disease Z, but an argument for proportioning attention and resources appropriately. Furthermore, it does not seem fair to claim that the letter itself does not acknowledge the threat from the right, or that those behind it have ignored that threat. At a number of points the letter alludes to the right-wing threat to free speech, although clearly the issue it squarely addresses is the threat from the left. Thomas Chatterton Williams, who spearheaded the letter, recently called President Trump the “Canceler in Chief”; and Yascha Mounk, a prominent signatory, has written that the primary threat posed to liberal democracy is from the populist right.

The final argument is similar to the last: it is that there are much more pressing political issues than the threat to free speech from the left. As Tom Scocca of Slate puts it, referring to Tom Cotton’s op-ed, “[i]n the world of the Harper’s letter, the threat that mattered was the one to the careers of veteran editors—not the threat that had bullets and bayonets behind it…” Again, this is not an argument against concern about the threat to free speech from the left, and it seems uncharitable to claim that simply because the letter concerns this issue, it is therefore the only issue that matters to its signatories.

The fourth and fifth arguments can also be interpreted as attacks upon the signatories’ motives. Giorgis writes that “it’s telling that the censoriousness they identify as a national plague isn’t the racism that keeps Black journalists from reporting on political issues, or the transphobia that threatens colleagues’ lives.” On Giorgis’s view, what this tells us is that the signatories don’t care, or at least don’t care enough, about the issues she identifies. But arguments about the motives of one’s interlocutor have no bearing on the merits of their position: if they don’t care about these issues that may make them morally bad people, but it does not mean that there is no threat to free speech from the left. In any case, it again seems uncharitable to conclude that they don’t care about some other issues simply because they’ve chosen to focus a certain amount of attention upon this one.

To conclude, my view is that among the arguments in the popular press against the Harper’s letter, the most difficult to answer is that worries about the threat to free speech from the left are overblown. It is simply difficult to tell when a series of incidents becomes a trend, and how concerned we should be about that trend. Beyond this, the arguments miss the mark for the most part. Of course, this does not mean that the letter’s claims are valid, and I have not defended them in this column.