Protest Selfies and the Wrong of Grandstanding 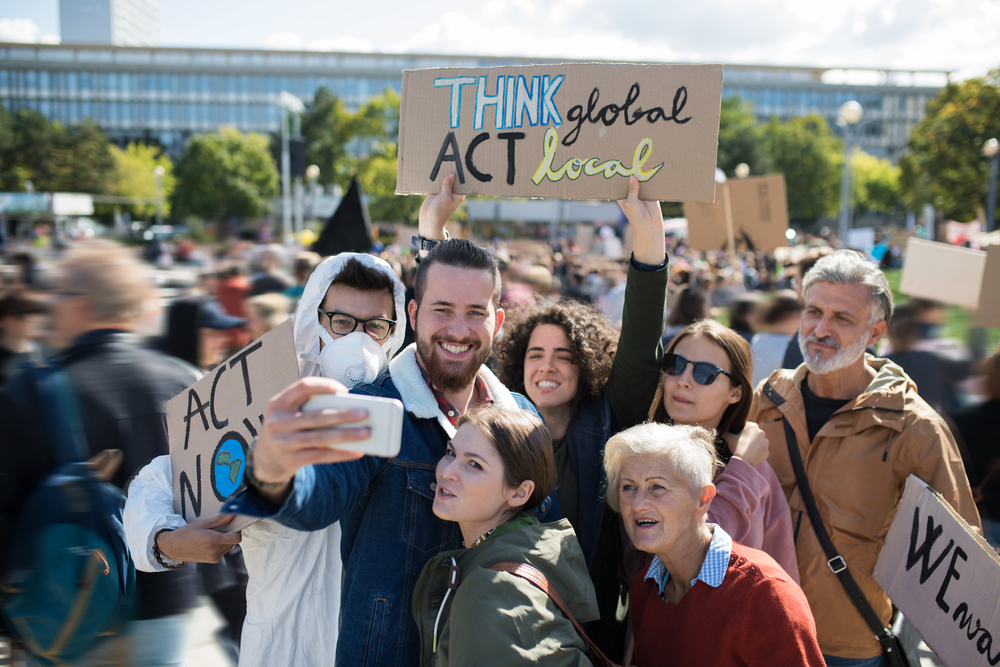 “People with placards and posters on a global strike for climate change, taking selfie” by halfpoint via depositphotos.com

On June 5th, Kris Schatzel posted a picture to her Instagram account showing herself holding a sign reading “Black Lives Matter” while at a protest in California. Shortly thereafter, Schatzel became the target of heavy criticism when a video surfaced showing how she staged the photo with a friend without actually participating in the march. As a so-called social media “influencer,” Schatzel has been accused of selfishly treating the crowds of people protesting the murder of George Floyd as just a scenic background for another picture to send out to her more than 240,000 followers (a charge Schatzel denied before restricting public access to her account).

But what might this story say about the hoi polloi of social media feeds? If you attend a protest, should you take a picture of yourself and post it on the internet? Or are you doing something wrong by sharing your protest selfies (even if your follower list is considerably shorter than six digits long)?

It seems like such social media posts could be defended in basically two ways: insofar as protest selfies continue to spread awareness of the protest’s mission and demonstrate your personal support for those goals, these pictures might play a role (however small) in promoting the interests of the protest in general. The importance of the internet (and, in particular, hashtags on social media) cannot be overestimated in contemporary social activism,and protest selfies fuel a significant portion of that. If one goal of public protests is to maximize visibility for a cause, then increasing the number of digital artifacts associated with a protest can indeed help to maximize outreach about the protestors’ message. Furthermore, on an individual level, personally aligning yourself publicly with a protest signals your support of the cause to your peers in a way that can serve to promote further conversations and explorations of the protestors’ message. If protest selfies are taken and posted in earnest, then they might indeed be fruitfully situated within the topography of contemporary activism (particularly when contrasted with the relatively effortless forms of “slacktivism” that now pepper the internet).

However, at least three other factors should be considered when weighing the ethics of protest selfies: the possibility of endangering protestors, the potential to objectify protestors, and the problem of moral grandstanding.

The first issue is clear-cut: though often unintentional, posting pictures and videos of any kind (selfies or not) from a protest runs the risk of exposing protestors to retaliation from employers, law enforcement, or others who would look negatively on their involvement in the protest. Even when rudimentary privacy measures (like face-blurring) are employed, digital fingerprints like picture metadata are routinely scraped by programmers of all stripes; posting your photos can contribute to coordinated efforts to expose the identities of protest participants.

More problematic, however, is the potential that your protest selfie objectifies the very people whom you might be seeking to support. Even if your picture isn’t simply staged (and you do genuinely participate in the protest) you might still be using the people around you as framing devices for a photograph that centers you more than the message that the protest is meant to amplify. Particularly when such framing is done intentionally (a practice which happens more frequently than some might think), treating other people like simple stage props is clearly morally wrong.

Which leads to a third way that protest selfies might be criticized: as examples of what has been dubbed “moral grandstanding.” As Justin Tosi and Brandon Warmke describe it, this is what happens when someone makes public declarations of moral judgments for the express purpose of drawing favorable attention to themselves; that is to say, to grandstand is “to use moral talk for self-promotion.” Such a move is sometimes referred to colloquially as “virtue signalling” and serves as a subclass of Harry Frankfurt’s notion of bullshit (where a speaker makes a claim simply to provoke a particular response in their audience): moral grandstanding co-opts ethical discourse on a topic to instead draw attention to the speaker rather than the topic itself.

This seems like what Schatzel was guilty of (in addition to objectifying the protestors and, by suggestion, lying): by invoking the language of the Black Lives Matters protests while centering herself in her Instagram post, she certainly seems guilty of seeking positive, self-focused affirmations in the characteristic manner of the grandstander. Insofar as protest selfies perpetuate similarly dishonest projections fueled by egotistical attitudes, they can also be criticized as morally corrupt.

However, because the key difference between the grandstander and the sincere person speaking earnestly from her heart is one of motivation that is entirely inaccessible to external judges, Tosi and Warmke warn against focusing on diagnoses of others’ faults;  instead, “thinking about grandstanding is a cause for self-reflection, not a call to arms…it’s an encouragement to reassess why and how we speak to one another about moral and political issues.” If we are sharing pictures of ourselves simply to seek some form of social capital, then we might indeed have another reason to pause and think twice before tapping the “Post” button.

But if our motives are genuinely altruistic — and we have considered the safety and dignity of those whom we might affect with our actions — then we could well be morally justified in sharing our protest selfies and continuing to promote a cause worth defending.