Figleaves, Bothsidesing, and the Ethics of Implication 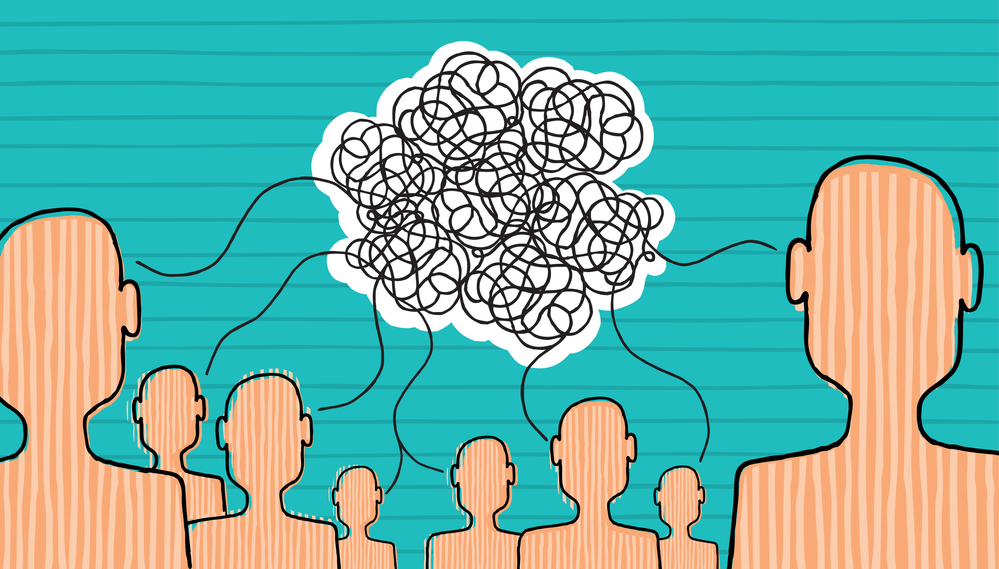 “Communication is built” by Curvabezier (via depositphotos)

This is an article about the “Plandemic” video that made waves online at the beginning of May, but, before I can say what I mean to say about it (and how people have interacted with it online), we need to talk about a little philosophy of language.

Imagine that we’re walking down the street one evening when we pass by a panhandler asking for change. After another few minutes, I say, “Did you see that fellow on the corner back there? Do you think anyone would notice if he went…missing?” Hopefully, you’d be both surprised and troubled to discover that such thoughts were on my mind. Moreover, those concerns would not be dispelled if I continued by saying, “What? I’m not saying that we should kill anyone! I was only asking questions! What’s the big deal with that?”

When thinking about how people communicate their ideas to each other, philosophers of language often make a principled distinction between the semantics and the pragmatics of a sentence. The former (which is sometimes called the sentence’s “propositional content”) is simply a matter of how the words in a sentence are defined and what they mean when combined together, while the latter is determined by how a speaker in a given context intends that sentence to be understood by an audience. Put differently, the semantic content of a sentence is “what is said” by a speaker, while the sentence’s pragmatics are a matter of “what is meant” by the speaker.

Often, a sentence’s semantic and pragmatic meanings are the same thing: when I tell  you “Many apples are red,” I mean to communicate simply that many of the pieces of fruit we both know to be apples are colored red. So, of course, the more interesting cases are when these two things come apart: let’s say that you ask me whether or not I’m planning to attend a party that our mutual friend is hosting and I reply with the sentence “I have to work that night.” Technically, the semantics of my reply only mean “I am expected to work a shift at my job on that night,” but, in context, I am still clearly answering your question—even though I didn’t say “No, I can’t go to the party,” that is what I meant, nevertheless.

In his essay “Logic and Conversation,” H.P. Grice used the term ‘implicature’ to describe this curious (and common) feature of how we communicate. In unpacking several different kinds of implicatures, Grice pointed out that they can take many forms. Imagine that you’re hiring someone for a job and receive a reference letter that simply says “Mr. X’s command of English is excellent, and his attendance at tutorials has been regular. Yours, etc.” Even though this letter says only positive things about the applicant, it still clearly means that the letter-writer does not think that Mr. X should get the job (or else the reference letter would be far more substantial and informative). We can even mean things without actually saying anything at all, as when a regular patron in a shop wordlessly places their usual amount of money on the counter and waits for the familiar shopkeeper to hand them their usual purchase.

And implicatures can certainly take the form of questions, too. Imagine I’m walking towards the kitchen and you ask me “Do we have beer in the fridge?” If I simply answer “Yes,” I will have responded fairly to the semantics of your question, even while likely ignoring the pragmatic reasons that you had for asking it (namely: you would like me to bring you a bottle). Or think about someone asking you “Are you really planning on wearing that outfit tonight?”—although the question alone might seem to seek a yes/no answer, it also implicates that the questioner already has a strong opinion about your outfit.

So, a question like “Do you think anyone would notice if that person went missing?” might, on the semantic level, be relatively boring—it’s just a question about the number of people who might notice if the panhandler was no longer around. But, depending on what I mean by asking it (that is, what my pragmatic intentions are), this question could cover a wide range of other interpretations, many of which could be terrible. Notably, my saying “I’m just asking questions!” does nothing to negate the operation of this sort of implicature – what I’m saying is just a question, but what I mean by the question is what really matters.

It’s true that Gricean implicatures are “cancellable,” by which Grice meant that we can clarify what we mean by what we say in a way that explicitly clarifies what we’re trying to communicate. Consider if my initial question about the panhandler instead went like this: “This might sound odd, but do you think anyone would notice if that panhandler went missing? I’m not saying that they should go missing! I’m just wondering if people would care.” Such a construction doesn’t seem problematic at all – the potentially concerning implicature (which could suggest that I was thinking of myself causing him to go missing) was cancelled by me making my meaning explicit.

Simply saying “it’s just a question,” however, is insufficient to actually cancel the implicature; instead, such a phrase functions like what Jennifer Saul has called a “figleaf” by merely “providing a bit of cover for something that is unacceptable to display in public.” Figleaves are like a conversational distraction that purport to shield a speaker from responsibility for what they say: Saul offers the example of someone saying “I’m not racist, but…” before going on to express something racist—the “I’m not racist” figleaf might make it seem (to some) like the speaker has done nothing blameworthy without actually excusing or addressing the problem of the subsequent racist expression. In a similar way, saying “It’s just a question” might make it seem like a question’s implicature is being cancelled without genuinely clarifying or correcting what the speaker really means.

And the ethics of this kind of speech can be important to consider. At their core, manipulative conversational moves like gaslighting and sealioning can both be fueled by seemingly-innocent questions that mask exploitative (or otherwise immoral) implicatures. Imagine an abusive boyfriend trying to twist his girlfriend’s emotions by perpetually questioning her memories and perceptions: not only is this boyfriend doing something wrong, but it is likewise wrong to pretend like he is innocent simply because he’s “just asking questions.” Furthermore, reckless usage of this kind of figleaf can easily contribute to manifestations of the Dunning-Kruger effect (where someone incorrectly believes themselves to be more knowledgeable about a topic than they actually are): if experts agree that a certain course of action is best, my self-confidence to criticize their consensus by asking probing questions suggests that I consider myself equally informed on the matter. So, even in conversations where the main victim is the truth of the matter, we have reasons to be suspicious that a figleaf like “I’m just asking questions” sufficiently covers one’s epistemic obligations to be clear.

In the case of the Plandemic video, the creators repeatedly question numerous elements of the nature, origin, and significance of the coronavirus pandemic, as well as the motivations of figures like Anthony Fauci and Bill Gates. Repeatedly throughout the 26-minute production, both the host and the interviewee cast doubt on the general consensus that the pandemic is both real and significant, often by asking questions that suggest nefarious (though unstated) answers. For example: towards the beginning of the video, the interviewer asks “How can a man [Fauci] who’s giving—any person who’s giving global advice for health own a patent in the solution of the vaccine?” While this certainly suggests that Fauci’s expert opinion has been corrupted by his financial interests, it does not explicitly say this, nor does the interviewer’s response (which simply names it a “conflict of interest”) fully capture the immorality implicated of Fauci by the question. Similarly to how the fallacy of the loaded (or “complex”) question can rhetorically force an interlocutor into a hopelessly bad-looking conversational position, Plandemic repeatedly deploys such tricks to suggest that competing sources of information are not to be trusted. Despite its idiosyncratic posture, Plandemic paints itself as though it is on an epistemic par with (or even superior to) the public position, simply by self-confidently presuming it has the evidential authority to ask the questions that it asks.

And when it comes to the online response to Plandemic, the same problem recurs. When someone defends their choice to share a link to the video on their social media feed by saying “I’m just asking questions,” this sort of figleaf hides their assumed belief that they have the background knowledge necessary to ensure that the questions being asked are relevant and fair. (Obviously, everyone has the political right to ask questions, but that is different from the epistemic right to do so, which requires an informed understanding of the matter up for debate.) Brute “bothsideism” is unhelpful enough for creating a respectful, functioning political system; it is even worse for people trying to understand what others actually mean to say.