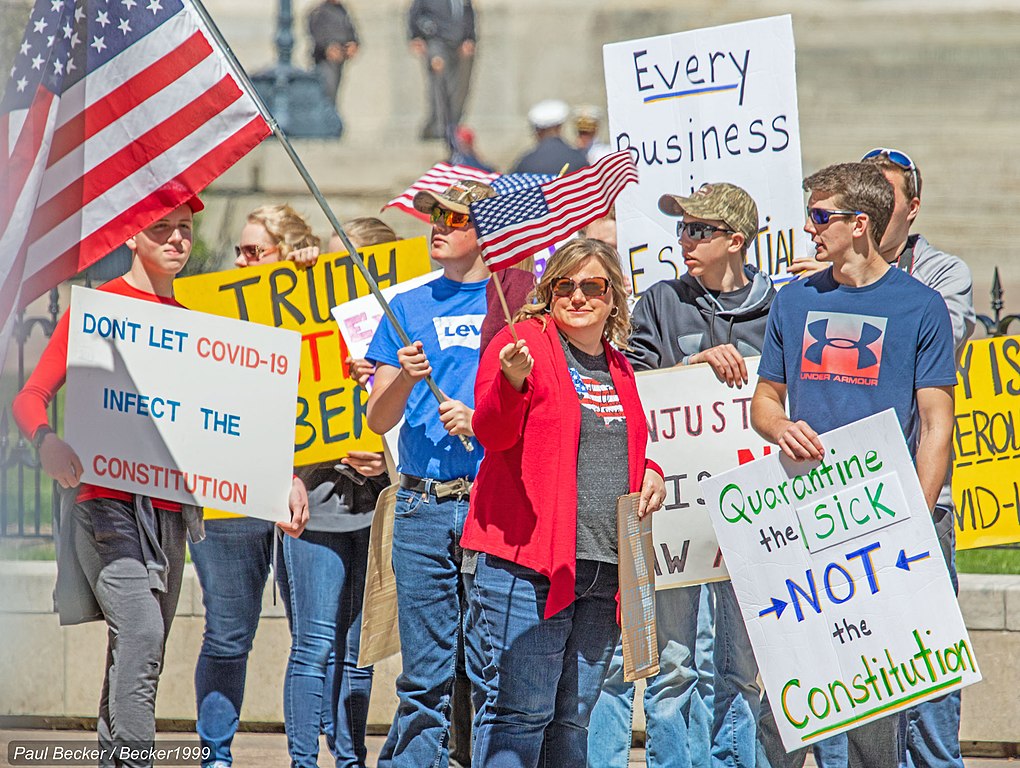 Thousands of Americans across various states have decided to take a stand against the lockdown measures imposed on them as the COVID-19 pandemic sweeps across the nation. In a particularly large protest in Washington state’s capital of Olympia, over 2,000 people gathered to fight for relaxed rules for the economy. Others have been much smaller—such as the 200 people who gathered outside of Indiana Governor Eric Holcomb’s residents to show their disapproval of the strict stay-at-home orders. Protesters carry signs with slogans ranging from “Land of the Free” to “The cure is worse than the virus” to “Let me work.” They often are advocating for an ease in lockdown measures, a reopening of the economy, and the opportunity to return to their jobs. They feel as if the government has restricted their freedoms too much, and are fighting for their rights. Protesters are using their right to freedom of expression to fight for their right to assemble, as well as the ability to work to earn money for their families. However, many protesters do not follow social distancing restrictions or wear masks, per Dr. Fauci and the National Institute for Health’s recommendations. Some experts worry that their protesting could lead to an increase in COVID-19 cases, more deaths, and possibly a prolonged quarantine period. This issue has sparked debate and controversy across the country. Technically, protesters are exercising their constitutional and basic human rights. Yet, is it ethically correct for them to do so, if it could make others sick—possibly killing some?

There is no easy or straightforward way to answer that question. To grasp the moral conflict at play, one must understand the idea of collective action. Managing the risks of the current crisis will require a concerted group effort. Unfortunately, what individuals perceive as their best interest is sometimes at odds with what is in the best interest of the group. Achieving the best public health outcomes for everyone involved may require individuals to forgo some of their rights, their jobs, and social lives. For example, it may be in the individual’s best interest to buy as many masks as possible to protect himself from the virus, but hoarding masks will cause a shortage for others, especially those that need them (such as healthcare workers). This situation gives each person the opportunity to benefit themselves, while spreading the negative consequences of their actions across the larger population.

This tension between the need for collective action and the exercise of individual rights is at the heart of the recent protests in America. Protesters are looking for what is in their best interest—exercising their constitutional freedoms, returning to their places of business, and seeing their friends and family—while the entire community will share any negative outcomes of their protesting. We can examine this problem by looking at both sides of the argument.

Let’s start with the protester’s point of view. There have been signs that America is reaching “the top of the curve,” and infection rates have decreased in some states. Yet, there is no sign that the strict lockdown measures that Americans have lived under for weeks will be loosened anytime soon. The protesters are people fighting for their freedom—and they have valid reasons to do so. All citizens of the United States have had some of their basic freedoms restricted in the hope of slowing the spread of the virus. There are curfews, business closures, and church gathering bans. They have no right to freedom of assembly, and have been heavily encouraged to wear masks. Many have lost their jobs because of lockdown measures—over 6.65 million Americans filed for unemployment at the start of April. Protesters want their normal lives and freedoms back. They want to be able to work to earn money for their families.

Many protesters share the opinion that the government has been too controlling over their lives and decisions—some have stated that the prolonged lockdown is “basically slavery.” They feel as if the government is being too intrusive without giving them a say in the matter. One protester went as far to say that the California governor Gavin Newsom is a “dictator” for promoting strict lockdown measures. California residents have experienced one of the strictest stay-at-home orders in the country—receiving countless alerts on their phones from the government promoting social distancing, staying at home, and closing businesses. They are only allowed to leave their house for “essential needs/work,” and their governor shows no sign of easing restrictions anytime soon. This can be seen as an invasion of privacy and a violation of their rights.

Some other protesters feel that it is the obligation of the government to try to “fix” the problems that the lockdown has caused. The quarantine that the government issued has negatively impacted private and small businesses, as well as citizens’ livelihoods. This means that the government may have to be the one to fix or mitigate the damages that their lockdown caused. However, many citizens have had economic troubles because the relief bill assistance has been slow to arrive. And it is not only citizens marshaling these arguments, Missouri Senator Josh Hawley has stated that the government is responsible for offsetting what lockdown measures have cost the country.

Others simply feel that lots of the government requirements and action taken are unnecessary. The 2019 novel coronavirus is usually only fatal to those with compromised immune systems or those with old age. Protesters don’t feel as if they, as healthy individuals with strong immune systems, should be stuck at home, unable to work and live relatively normal lives. The signs they carry (“Quarantine the sick, not the healthy”) show this sentiment. Protesters in rural areas also feel as if the lockdown measures aren’t as necessary where they live, as their population is less condensed as it is in big cities, making it harder for the virus to spread.

And while many protesters gathered in large crowds without masks, ignoring safety recommendations, many others have not. There are protesters who wear masks, or who have been protesting in their cars instead of gathering with other people.

However, many people disagree with the protests. They believe that protesters are not taking proper precautions to protect against the disease, and they could cause an increase in cases, deaths, and possibly increase the quarantine period.

“Give me liberty or give me death” is a frequent slogan in protest. But as many have suggested, protesters could be “campaigning for both.” It is a fact that many protesters, especially in news footage, were not following social distancing precautions. They were gathered in crowds as large as 2,500 and most were not wearing masks to prevent spreading the virus. Experts worry that these anti-quarantine protests can cause a surge in COVID-19 cases. Rachel Revine, the Pennsylvania State Health Secretary, stated that “This is how COVID-19 spreads,” when talking about the protests. Eric Feigl-Ding, an epidemiologist and public health scientist at the Harvard TH Chan School of Public Health, tweeted that he predicts a “new epidemic surge” with an incubation period of about 5-7 days before the onset of any symptoms and transmission, concluding that there will likely be “[an] increase in 2-4 weeks from now” of cases in America.

Some nurses who do not support the protests have also made their opinions known. A few (in Harrisburg, Pennsylvania and in Denver, Colorado, to name a few) have stood in a counter-protest at crosswalks, blocking the cars of angry protesters. In Michigan, many healthcare workers have complained that the protests caused them to arrive late to work. Some ambulances have had a slight delay in reaching the hospital because of the gridlock protests.

Others simply don’t agree with the message of the protests. They feel as if strict lockdown measures should still be in place. America has been the center of the pandemic, with over 735,000 known cases and 40,000 known deaths nationwide. Many don’t feel that their country is ready to re-open. For example, Rachel Revine said that there needs to be a decrease in cases and an increase in the amount of tests produced, stating that “the idea that we can ease up is exactly the wrong answer.”

Yet one of the main reasons that people are not pleased with the recent protests is because they feel as if the protesters are not thinking about the common good. Protestors carry signs saying “My body, my choice.” But, is it really their choice? Their actions could lead to an increase of coronavirus cases, and possibly fatalities, in their community.

It all comes back to the idea of collective action. The individual protester sees it in their best interest to protest for their own rights, and for their own ability to work—they fully have this right to freedom of expression. But many protesters aren’t asking themselves what the possible costs of their actions could be. By gathering in large crowds without masks to protest for what is in their own short-term benefit, they could cause an increase in COVID-19 cases. This can risk the lives of everyone in the community, and undoes a lot of the “progress” made under the quarantine.

Could we outwit human nature’s phenomenon of collective action? It would involve us as individuals sacrificing some of our own wants for the good of the community. Protesters may have to use social media or other digital platforms to have their voices heard and make a stand without endangering the vulnerable people in their community.

This coronavirus pandemic is a difficult time for all of us. We’ve stayed inside for weeks, many without jobs or people to interact with, to help “flatten the curve.” And now, as people call for change through protests, we may run the risk of increasing COVID cases. In the midst of the uncertainty and the controversy, one thing is for certain: We need to ask ourselves what possible costs our actions have for others. We must consider the phenomenon of collective action—are we acting in the interest of our own individual short-term pleasure, only for the entire community to share the negative effects of our actions? In this case, only time will tell.

Emma Poma is currently a student at the American School of Barcelona. She enjoys learning about the ethics behind current events, and participates in MUN and debate at her school. She is interested in the current events and research at the center of these activities. She has lived in both California and Barcelona.
View All Articles By Emma Poma
Related Stories