From Boring to Soaring; or, Beauty Is in the Eye of the Executive Order 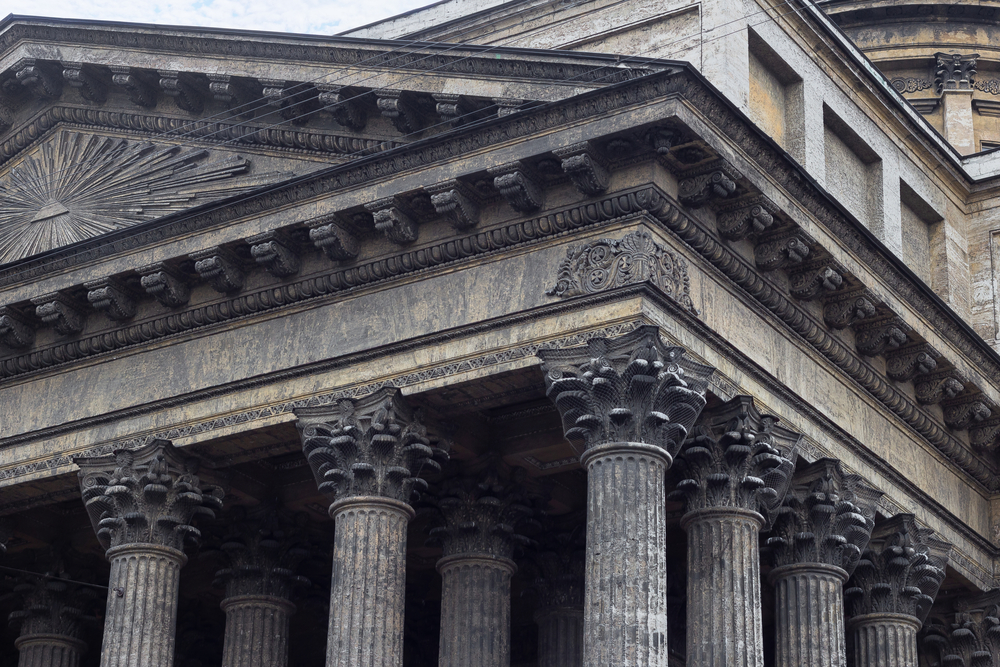 “Architecture of the Empire style …” by evgris (via depositphotos)

Donald Trump seeks to style himself as the architect-in-chief of the United States. Recently a draft of an executive order, predictably entitled “Make Federal Buildings Beautiful Again,” would require any new federal buildings with a budget greater than $50 million to be constructed in a “Classical” architectural style similar to “those of ancient Rome, Greece, and Europe.” The proposed rationale behind the order is that many federal buildings built in the last 60 years do not inspire the American people nor suit the dignity of the US government. In short, he thinks they’re ugly.

President Trump is fixated on the beauty and ugliness of things, using both of these terms broadly as general praise and blame, respectively. He has repeatedly referred to the border wall between the US and Mexico, now being built in fits-and-starts, as beautiful. While he has used it to refer to people as well, among the things that Trump finds beautiful are his fingers, military equipment, his presidential campaign, and airports. Is there any consistent conception of beauty that can make sense of collecting objects as disparate as Classical architecture, a border wall, and Trump’s own digits?

We can quickly dispense with the idea that Trump is not using the word ‘beautiful’ in an aesthetic sense, but instead in a practical sense. “Beautiful,” when used by Trump to describe the border wall does not mean “effective at deterring immigration” or “built to withstand and last.” He has ordered redesigns of the wall, drafted by engineers, in ways that have made it more expensive. Sections of the border wall have fallen over in moderately windy conditions. And people with tools that can be bought at any home improvement store cut through sections of the wall to illegally move goods.

The most obvious guess would be some sort of subjective theory of beauty. A subjective theory is what people have in mind when they say, “beauty is in the eye of the beholder.” This means that statements about beauty are true or false dependent upon the standards and tastes of the person making the statement. Hence if Trump says the border wall is beautiful we should understand this statement as “The border wall is beautiful (according to the tastes and standards of Donald Trump).” But this statement could be true at the same time as another, superficially contradictory statement made by Speaker of the House Nancy Pelosi that “The border wall is not beautiful—it is ugly (according to the tastes and standards of Nancy Pelosi).” The apparent contradictoriness of these statements comes from the fact that we don’t usually say the parenthetical part, “according to the standards and tastes of so-and-so” out loud. Because of that we hear “The border wall is beautiful” and “The border wall is not beautiful—its ugly” just as we’d hear “It is 36℉ outside right now” and “It’s not 36℉ outside right now—its 29℉.” The latter pair of statements are contradictory assertions of facts, verifiable by reference to some standard outside of any specific person’s judgment.

So are Trump’s statements just the mark of an idiosyncratic taste? That could explain comments about his own fingers and the border wall. However his executive order concerning Federal architecture appeals to the sentiments of US citizens at-large, or to some effect that architecture has on them. It also echoes some of the words from the current guidelines for Federal architecture written in 1962 by Assistant Secretary of the Labor Department, Daniel Patrick Moynihan, which stated that Federal buildings should “reflect the dignity, enterprise, vigor, and stability of the American National Government.” These considerations still point to a relative conception of beauty. But rather than facts about beauty differing according to the myriad and sundry standards of individual people, appeals to the character and tastes of a nation and its people reflect a kind of cultural relativism. Now statements about the beauty of the border wall, for example, would be interpreted as meaning “The border wall is beautiful (according to the standards and tastes of US culture).” It’s not clear whether there is anything meaningful that can be said about the collective aesthetic standards of US culture, but a majority of people in the US oppose the construction of a border wall between the US and Mexico. Moreover, the Classical style, as acknowledged by the text of the executive order, refers distinctly to the standards of cultures distant in both time and distance from the US—Greece, Rome, and Europe from hundreds or thousands of years ago. Even conceding the fact that the architectural style of the early days in the US bore the imprimatur of Classicism, various modernist and postmodernist styles have flourished over the past 100 or more years.

We are left to consider that an objective concept of beauty lurks behind Trump’s statements. After all, the predominant conception of beauty in throughout the periods of culture and time referred to in Trump’s executive order was an objective one. That is it argued that beauty was not dependent on any particular person or group’s standards of tastes, but rather dependent upon features of objects themselves. The columns of Ancient Greece, and the figures of Renaissance paintings, were constructed with an eye to symmetry. A beautiful thing was symmetrical, because that signaled a match with some ideal and complete form or mathematical principle. However the border wall itself is not built of classical materials or in a classical style.

The Trumpian conception of beauty is not a consistent one—at least not as a purely aesthetic one. If the executive order about Federal architecture, and the general sense of beauty Trump is appealing to, refer to the standards and tastes of US citizens, it’s only a small subsection thereof. This move can be interpreted as another salvo in the so-called “culture war,” with Trump pandering to the conservative, alt-right, and/or White Nationalist groups of the United States. In the end it seems “beauty” is just a merely rhetorical shortcut for Trump: a potpourri of pandering, opportunism, and unreflective sentiment. As many critics have already noted, no conception of beauty should be legislated or commanded from top-down—much less one with so little substance.