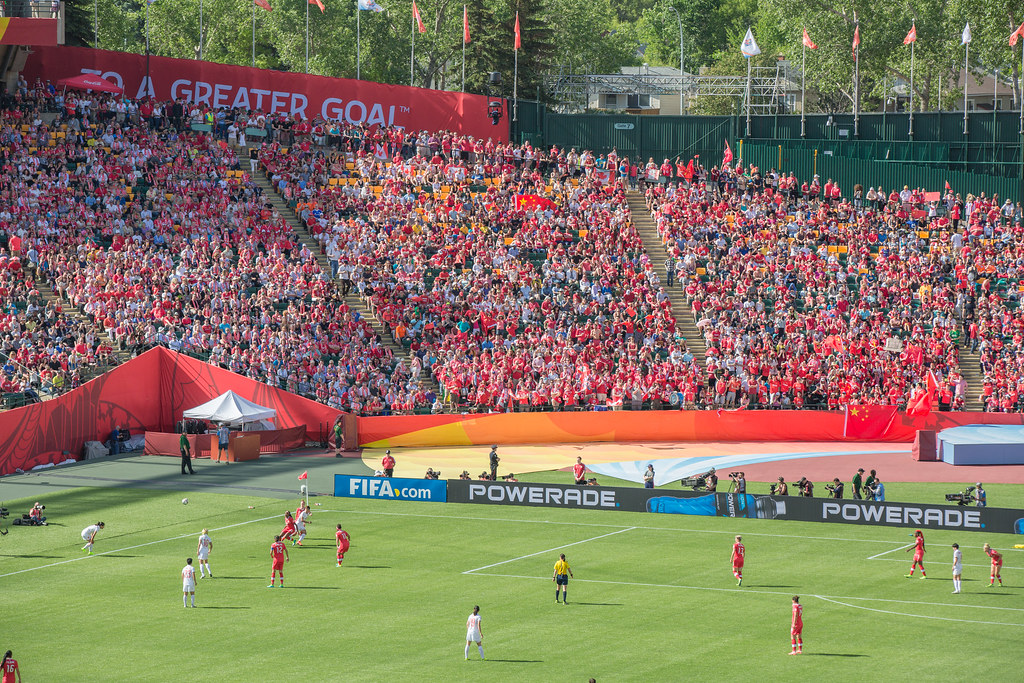 The popularity of women’s soccer is growing rapidly. The 2019 FIFA Women’s World Cup in France is being watched by record-breaking numbers of people around the world. 10.9 million people in France watched the hosts opening match against South Korea, far above the previous record of 4.12 million for a women’s soccer game. In the United Kingdom, 6.1 million people watched the match between England and Scotland. Similarly, in the United States, viewing figures have risen by 11% from the previous World Cup in 2015, even though the matches are played at a less convenient time for American audiences.

Off the pitch though, women footballers continue to struggle for fair treatment from footballing authorities. One high-profile area of protest is the issue of prize money. The winners of this year’s World Cup will receive $4 million dollars in prize money, more than double the amount for the winners of the 2015 competition. An impressive figure, we might think, until we compare it to the $38 million received by the winners of the men’s World Cup in 2018. In total, FIFA has set aside $30 million in prize money for the Women’s competition compared to $400 million for last year’s men’s competition.

The issue of gender inequality becomes even worse when we consider differences in pay. The 2017 Sporting Intelligence Survey found that the gender pay gap in football is particularly extreme compared to other sports. To take two clear examples, the average first-team player in the (men’s) English Premier League received £2.64 million in 2017, while the average pay for a player in the equivalent women’s league, the FA Women’s Super League, was just £26,752, while the total pay for all players in the top seven women’s leagues was roughly equal to the pay for just one male footballer, Neymar at Paris St-Germain. As Martha Kelner, chief sports reporter for The Guardian, points out, these figures suggest, “football is perhaps the most unequal profession in the world.”

In response many women’s national teams have demanded for this pay gap to be eliminated or at least reduced. The US Women’s team are currently involved in a lawsuit against the US Soccer Federation over ‘institutionalized gender discrimination’ and demanding to be paid the same as the men’s team. Similarly, the Danish team refused to play in a friendly match in 2017 in protest over their pay and conditions, while the Scottish team implemented a brief media blackout in a similar protest in 2017. There have also been some notable successes. In 2017 the Norwegian FA introduced equal pay for their men and women’s teams, while the Dutch FA recently agreed to introduce equal pay by 2023.

Are national associations morally required to pay their men and women’s soccer teams the same amount? As I have argued elsewhere (together with my colleague Martine Prange) there are three different arguments to support such a duty. Most straightforwardly, we might see the gender pay gap in soccer as a case of gender discrimination. The US team have been pushing this kind of argument in their campaign for Equal Pay for Equal Play. As star-player Carli Lloyd put the point, she and her teammates were, “sick of being treated like second-class citizens.” Feminist campaigners around the world have long argued that men and women working in the same job or equivalent jobs should be paid the same. Paying women less than men for the same work is unjust gender discrimination and is morally wrong. Given that women’s soccer players are being paid less than their male equivalents for playing for their national teams, this seems like a clear case of wrongful discrimination.

However, this argument has been met with fierce resistance by some commentators. Writing about the decision of the Norwegian FA to introduce equal pay, journalist Matthew Syed claimed, “Norwegian male footballers are effectively doing a different job. In economic terms, they are more productive, persuading more fans and TV viewers to watch them, and more companies to sponsor them.” According to Syed, the different levels of revenue generated by the two different teams means that their work should not be viewed as the same or even equivalent. This means that paying these two teams differently is not an instance of discrimination; it is simply a reflection of the differing commercial value of the two teams.

While many find this form of response persuasive, it cannot be used to justify all of soccer’s gender pay gaps. In the case of the US women’s team, there simply does not seem to be any good reason to think that the women’s team generates less revenue than the men’s. After winning the World Cup in 2015, the US women’s football team generated a $6.6 million profit compared to the men’s team’s $2 million. In the three years following, more total revenue has been generated from the women’s team’s matches than from those of the men’s team. Despite this, the women’s team continues to be paid less than the men’s team. At least in this case, there seems little reason to accept that the lower level of pay is a reflection of the lower levels of revenue generated and the charge of discrimination seems fair.

However, the case of the US Women’s team is something of an exception. At most national soccer associations, the men’s team generates more revenue than the women. Some may take this to be the end of the discussion. If the different levels of pay simply a reflect the different levels of revenue generated then there does not seem to be any discrimination going on. And if it is not discriminatory then we may think that there is no moral requirement to pay women’s teams the same as men’s.

This conclusion, though, assumes that avoiding discrimination is the only ethical reason that could support equal pay for women’s footballers. This is a mistake. A different ethical reason in favor of equal pay is that this action would be valuable for what it would express about the value of women’s soccer. This thought seems to underlie at least some of the recent moves towards equal pay. As the President of the Norwegian Players’ Association, Joachim Walltin, said of his association’s decision to introduce equal pay: “it was actually the FA’s own idea to go for equality. They said: ‘Isn’t it a cool idea and wouldn’t it be a good signal if we did things equally?’” The idea here is that by paying both sets of players the same, national associations would send a message that men’s and women’s football are equally valuable. This would be a positive message to send and may help to improve how people view women’s soccer.

While this does seem like a positive message, some might object that it does not provide any reason to think there is a moral duty for associations to move to equal pay. Yes this would be a nice thing to do but would it really be wrong to keep paying men’s players more? Wouldn’t it also be acceptable to continue to pay male players more in order to reflect their higher commercial value? The positive message in itself might not seem to provide a sufficiently strong reason to think there is any moral obligation here.

The case that there is a duty for national associations to move to equal pay becomes much stronger when we consider the role that national football associations have played in frustrating the development of women’s football. In England, for example, around 150 women’s soccer teams existed in 1921 with high-profile matches attracting tens of thousands of people. One especially high-profile match between Dick Kerr Ladies and St Helen Ladies attracted 53,000 spectators with an estimated 14,000 more people unable to gain entry into the ground. By the end of the following year however, the English Football Association responded by banning women’s football from their members’ grounds. Their reason? That, “The game of football is quite unsuitable for females and it ought not to be encouraged.” The English FA was far from alone in this. Similar bans on women’s football were introduced in France, West Germany, Brazil, and the Netherlands among others.

Alfred Archer is an Assistant Professor of Philosophy at Tilburg University and a member of the Tilburg Center for Logic, Ethics, and Philosophy of Science. His primary research interests are in moral philosophy and moral psychology, particularly supererogation, the nature and ethics of admiration, and the ethics of fame.
View All Articles By Alfred Archer
Related Stories