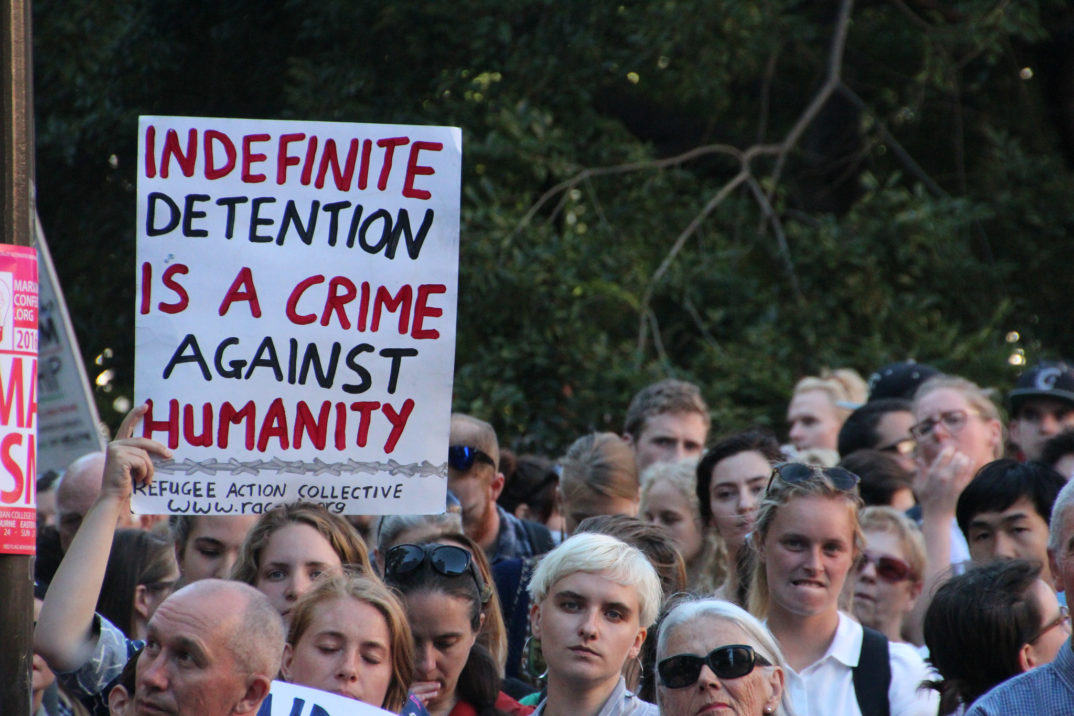 The Pacific Islands Forum is a regional intergovernmental organization of 18 Pacific countries. Australia is the largest member nation, with a population of 25 million. This year, in the first week of September, the annual forum meeting is being held on the tiny island nation of Nauru. Nauru houses Australia’s only remaining offshore immigration detention centre.  That centre, a bastion of Australia’s implacably cruel asylum seeker detention policy, has again been in the news for the past several weeks as a crisis develops concerning the mental health of dozens of children detained indefinitely there.

Leading up to this crisis there have been many incidences of children in the detention camp self-harming. In March a 10-year-old boy, who had been in the camp since he was 5 years old, repeatedly attempted suicide. He was only moved to Australia on a court order. Currently, sources from medical staff at the centre are reporting that at least 20 children are refusing to eat and drink. These children are at great risk of permanent harm or even death. Such is the level of hopelessness and despair. Staff are calling for urgent evacuation to Australia for medical treatment and psychiatric support for at least a dozen children.

The Australian government is well aware that long-term detention has serious mental health repercussions, and that children are especially vulnerable. Yet it is giving no quarter. Children are removed from the camp to Australia for treatment only under duress, or as a last resort. In recent weeks a 12-year-old refugee was moved to Australia only at the point where medical staff warned that he was days away from death. He had refused food, drink and medical treatment for 20 days. In several cases the Australian Federal Court has intervened and ordered the Minister for Immigration, Peter Dutton, under whose jurisdiction such matters fall, to allow children, with family members, into Australia for urgent medical care.

I made the point in another recent piece about Australian Immigration Detention that the policy is absolutely unethical. The argument is only magnified by the fact that those now suffering the most are children. Yet one of the most disturbing developments in the current crisis is the Nauruan president’s statement that children were being encouraged to “hunger strike” by their families and by refugee advocates. Baron Waqa has claimed that the children’s parents and various care workers are using these children to in order to work the system.

In an interview with Sky News Waqa said, “We tend to think … these kids are pushed into doing something they’re not aware of and the dangers of, if that is the case we are extremely worried.” He continued, “It’s the way of working the system and probably short-circuiting it just to get to Australia.”

Australian doctors have reacted with anger and dismay to the suggestion. It matters little whether Waqa has been mislead or is outright lying.

The depth and dimension of cynicism regarding those who care for these ill children is a moral outrage. The lie seeks to implicate and to blame families, suggesting that people who have suffered so much already would maximise and exploit their own children to ‘get a better life.’ This lie is calculated to turn the tables by attacking the character of people who care for and who advocate for refugees, recasting ‘the system’ itself as some kind of victim. Grave injustice is compounded by victim-blaming. And it is a familiar right-wing demagogic tactic – portraying the suffering person as manipulative.

The children on Nauru have reached the psychological limit of what they can withstand. These children are so traumatized, and find life so hopeless, that they have begun to emotionally and psychologically shut down, to disengage to the point of refusal of care and sustenance.

While President Baron Waqa’s statement is in itself appalling, Australia is implicated in it: he can make such a statement in part because Australian government rhetoric has paved the way for it. The Australian government may not be willing to put it quite so plainly themselves but be in no doubt they will not contradict it; this is an allegation they have previously made themselves. In 2015, workers from the Save the Children organization were accused of ‘encouraging asylum seekers to self harm and fabricate stories of abuse.’

The then immigration minister Scott Morrison (architect of the hard-line policy Immigration policy on asylum seeker boat arrivals known as Operation Sovereign Borders) was unrepentant, even when the workers were subsequently cleared of these, and other, allegations in an inquiry. (This current situation is coming to a head just as Morrison has risen in yet another political coup in Canberra to claim the Prime Ministership, following a week in which the right wing of the ruling party attempted a hostile takeover of the government.)

So, great insult has been added to grave injury in the suggestion by Baron Waqa of parents’ and advocates’ complicity, and in Australia’s willingness to silently perpetuate such accusations. When we talk about the moral implications of such a situation, by invoking failure of moral duty, or violation of a moral right, (that is, a human right) we are invoking the language of deontology.

Deontology is, broadly, duty-based ethics, which holds that certain ethical or moral duties are fundamental, and morality itself is based on not violating them. Duties like telling the truth and not using people instrumentally but recognizing each person as an end in themselves, never a means to an end. Duties not to harm others, or to subject them to cruel and inhumane treatment are fundamental moral imperatives. Human rights are based on deontological principles. Rights are the reverse side of duties in that a right confers a duty. The right to freedom from cruelty confers on others a duty not to be cruel. There are different ways in which deontological principles can be philosophically grounded, but basically deontology takes as its foundation the fundamental dignity of persons.

The incarceration of children in the first place, the ongoing refusal to act on all available knowledge of the catastrophic mental and emotional harms of this incarceration, the recalcitrant refusal of treatment and finally the blaming of parents and carers for the children’s suffering all demonstrates an abject collapse in moral duty based on a government’s refusal to acknowledge the human dignity of these children. It has become, for Australia, a matter of national moral disgrace.