Reframing Picasso: Hannah Gadsby and “Separating the Man from the Art” 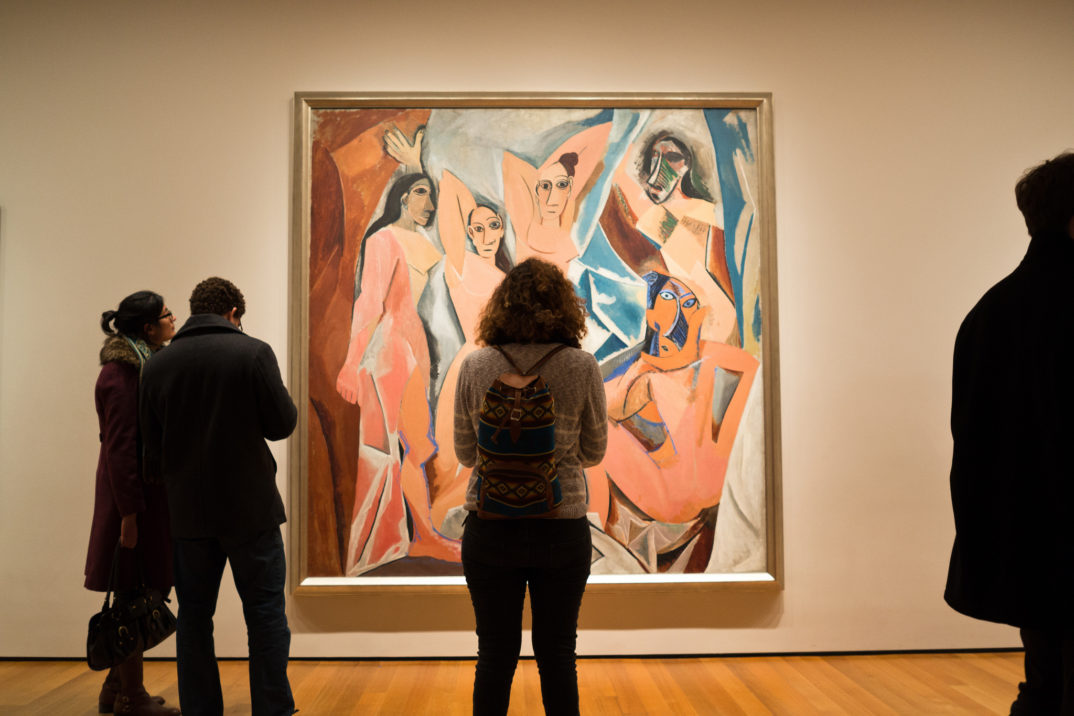 “High art elevates us and civilizes people,” the Australian comedian Hannah Gadsby claims, jokingly presenting an observation from her art history degree. “Comedy, lowbrow. I am sorry to inform you, but nobody here is leaving this room a better person.” When she delivered this joke, most of the audience probably did not detect the irony, because who would expect to leave a comedy show with a new glimpse at humanity? Those discussions are usually saved for the art museums.

As I explore in “The Unexpected Tension of Netflix’s Nanette,” Gadsby challenges her audience to consider the cost of comedy on marginalized groups, including the queer community with which she identifies, in her show Nanette that has been released on Netflix. She discusses the toll that turning stories of tension into humor have on her because they are not the full stories. Reversing the tropes of the entertainment, Gadsby uses a new kind of comedy—one that stops being funny enough to require the audience to think before absentmindedly laughing—in order to deconstruct the people and traditions that our society holds so dear: Picasso and high art.

In my previous article, “Reputation over Potential: ‘Classic’ Humor, Art History, and the Women on the Other Side,” I explore the personal lives of powerful men, including Picasso. “I hate him,” Gadsby admits. “But you’re not allowed to. Ah, I hate him. But you can’t. Cubism.” As a student of art history myself, I have often heard the advice, which Gadsby discusses, to judge the artist separately from the art. Gadsby counters that idea by suggesting that we erase his his signature off of his paintings and see how much they will sell for: “Nobody owns a circular Lego nude, they own a Picasso.”

In his Prindle Post article, “On Bad Artists, Good Art,” Kenneth Boyd addresses the nuances of enjoying the art of artists who are “bad people,” giving the examples of Kevin Spacey, Bill Cosby, and Rosanne Barr. Boyd brings up arguments from both sides, suggesting how it is unfair to deprive oneself of entertainment that has already been created, unfortunate to boycott the many people who worked on the show as well, and upsetting to afford social permission afforded to the “bad” people that continue to thrive in our society.  However, if we really were able to separate the two completely, would there really be any potential for harm from the works? In this article, I will use Picasso as an artist to study closely: since he is dead, I am not looking at viewers’ financial support, but rather the effect that supporting his works could have on the viewer himself or herself.

Art critics have deemed the works of Pablo Picasso to be visionary, genius, complex, innovative, and brimming with originality. Or as Gadsby puts it: “He’s sold to us as this passionate, viral, tormented, genius, man, ball sack, right?” John Golding even ventured to declare Les Demoiselles d’Avignon: “the most important single pictorial document that the twentieth century has produced.” Perhaps Picasso’s most revolutionary contribution to art’s narrative was his role as a founder of Cubism, a pivotal movement in modern art that disrupted the tradition of Western art with its degradation of two point perspective and geometric forms standing in for realistic representation. Yet in their praise and idolization of Picasso, art historians tend to gloss over the misogynistic and colonialist undertones that are deeply ingrained in his work.

In Nanette, Gadsby recalls a common bit of advice that students of art have probably heard half a dozen times at least: “Separate the man from the art. That’s what I keep hearing.” Yet Picasso’s homophobia, sexism, and racism bleeds into his canvas. Picasso began an affair with a 17-year-old girl when he was 45, making light his actions’ criminality by saying that they were both in their prime. Asserting her belief that a 17-year-old girl is never in her prime, Gadsby says, “I am in my prime. Would you test your strength out on me?”

Even if we were to separate the fact that Picasso had sex with an underaged girl from the art historical merit of Les Demoiselles, his misogyny works its way into his construction of the female form. Picasso’s Portrait of Gertrude Stein and especially his Les Demoiselles d’Avignon perturbed his contemporary male viewers because he soiled the pleasure of the female body’s sexual intrigue with masculine features and elements of savageness. These works established the spatial and compositional tensions of Cubism and perhaps all of modern art, yet these revolutionary discoveries exploited African cultures and emerged out of symptomatic paintings of Picasso’s anxieties about female agency and sexuality. In Picasso’s portrait, Stein has masculine features with her large forehead, almond eyes, slouched posture, drab cloak hiding the form of her body, widespread knees, pulled back hair, and one hand placed on her upper thigh.

Gertrude Stein, an intelligent, revered, ambitious, acclaimed, lesbian writer and art collector, collapsed Picasso’s fragile notions of passive female sexuality. Stein existed in the same critical and intellectual company as Picasso, holding her own in the male-dominated art world. Fernande Olivier, Picasso’s girlfriend, described Stein as “Masculine in her voice, in her whole bearing.” Stein wielded the same power as Picasso. She was not dependent on men for sexual satisfaction; in fact, in her partnership, she assumed the male role.

Sitting for her portrait, Stein presented Picasso with a problem that would haunt this painting and many to come, including Les Demoiselles and culminating in Cubism: the problem of her lesbianism. Stein not only has the capacity for sexual desires, but her preference for women deems her sexuality as utterly independent from men, threatening the male gaze. Picasso could not objectify, tame, and enjoy painting Stein with the dominating power of documenting passive femininity—as with his other models—because her sexuality mirrors his own. After sitting down to paint Stein’s portrait “some eighty times,” Picasso finally completed the work, painting a mask over her face.

Perhaps Picasso struggled so much to paint Stein once she sat down for her portrait because he realized that he was painting a woman in her prime. He could not test his strength and control on her because her independence, ambition, and gender non-conforming identity rendered him powerless, but maybe he spent those 79 times trying before giving up and masking her. Over a century later, another gender non-conforming woman challenges Picasso, but instead of being the subject of his art, Gadsby makes him the subject of hers by using comedy in order to unmask the misogyny behind his idolized reputation.

Reminiscent of his challenge with Stein’s portrait, Picasso created over a dozen sketches of Les Demoiselles. He crudely layered paint indecisively over his compositional revisions, contributing to critics’ criticism that the work was unfinished. In Les Demoiselles, the women working in the brothel have angular vaginas and powerful poses expose the dangers of liberated female sexuality. This painting is about women, not for women—a formula on which so many patriarchal institutions rely. The phallic orientation of the pear and apple at the bottom center of the canvas reveals how exposed the genitalia and in essence the male viewer is when up against an independent woman. Picasso appropriates African masks in order to capture a fear-inducing, primitive, and carnal representation of women.

In the late nineteenth century, European colonizers exploited and profited from Africa’s abundant resources under the self-serving guise of lending the African people a much needed, parental guidance. European explorers spread rumors of childlike level of cognition, savage practices, and superstition-based religions, collecting African art as proof: “The objects that came back . . . were still seen as trophies or curiosities—evidence of the ‘savage’ or childlike aspects of the people who made them.”

In 1907, Picasso visited Trocadero Ethnography Museum, which housed African art as objects, while working on his sketches for Les Demoiselles. In “The ‘Discovery’ of the African Mask,” Dennis Duerden explains how artists like Picasso deemed their inspirations as the products of their own artistic credibility: “‘The discovery,’ then, was the appropriation of an object that became known as ‘the African mask,’ a face-covering that had been torn away from its context.” Unfairly judging African sculpture, which emphasized geometric features and spiritual significance, by the European standards of art that at the time prized naturalism and perspective, demonstrated that critics did not consider the objects to be art.

But when Picasso deconstructed naturalism and perspective, he was working from genius, and his fascination with African masks was branded as a sort of research instead of artistic inspiration and dialogue. Picasso treated African art like the female body: an object to look at—a conduit for his artistic expression; he failed to discern potential, independent value beyond inspiration and to distinguish complexities between separate women and African countries. Using a racist methodology to spread a misogynistic message, Picasso covers two faces of the sex workers with adaptations of African masks in order to convey the primal savageness of women’s sexuality can only be represented through that found in African objects.

If we separate the man from the art, we give his art the benefit of the doubt and erase the harmful aspects of the paintings that should be subject to conversation and criticism. “High art,” Gadsby says nearing the end of her show. “Oh, I’m gonna call it guys: bullshit.” In the world of art history with Picasso playing such a glorified role, women cannot aspire to be much more than a model, and Western artists monopolize invention and genius. Gadsby upended not only the lowbrow associations of comedy that she discusses at the beginning, but also the elevating and civilizing qualities of high art. Even though they did not expect it when they bought tickets, there is a good chance that most of the audience members walked out as better people.

“I want my story heard because ironically, I believe Picasso was right,” Gadsby claims at the end of her show. “I believe we could paint a better world, if we learned how to see it from all perspectives, as many perspectives as we possibly could. Because diversity is strength. Difference is a teacher. Fear difference, and you learn nothing.”