Eric Schneiderman and the Moral Wrongs of Hypocrisy 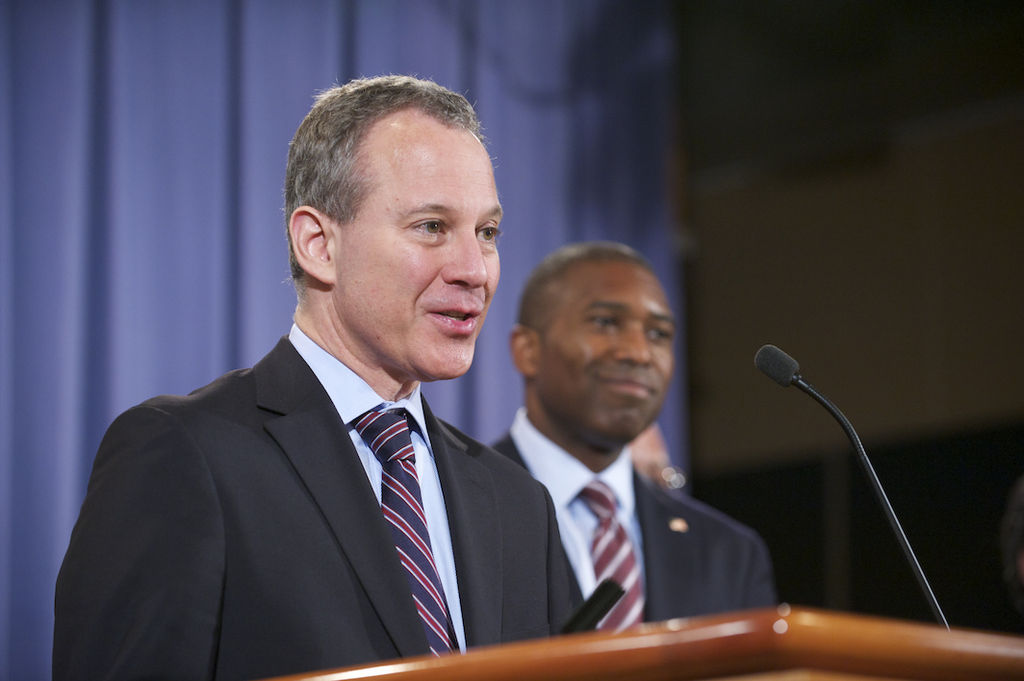 “Eric Schneiderman and Tony West” by U.S. Department of Justice is licensed under CC0 Public Domain (via Wikimedia Commons)

For many, it is the hypocritical aspect of Schneiderman’s offenses that are most upsetting. To be a hypocrite, someone holds a judgment about what the right thing to do is while acting against that judgment. But how is this different than ordinary cases of failing to live up to your moral standards? Indeed, on many standard views of moral motivation, the only way we behave morally wrongly is by acting against our better judgment in some sense. When I behave immorally, I think there is something I should do – keep my promise to drive a friend to the airport, say – but I make an excuse and don’t. Of course, I’d say taking my friend to the airport is the right thing to do, but does that make me a hypocrite or simply immoral — someone failing to live up to my standards? (If I don’t have some idea of what I should do, it may seem unfair to charge me with doing the wrong thing – I didn’t think I should have done anything else under the circumstances!)

It is common enough to fail to live up to our moral aspirations, but to be a true hypocrite seems to be something beyond this common failure. The way that the hypocrite behaves is against their better judgment in a more robust way, it seems. Perhaps they are particularly vocal about their views, or they are explicit principles of morality, or they have used their moral judgments in judging others’ behaviors, or these judgments can be used to define who they are. In order for a case of failing to act in accord with your moral judgments to count as hypocrisy, the moral judgments in question must be particularly robust, which leads to our reactions to hypocrites.

The problem of hypocrisy can be twofold. First, it can be upsetting to discover a mismatch between purported virtuous judgments and convictions on the one hand, and someone’s actual behavior on the other, which may reveal someone’s “true nature.” The statements and work that may have been done in service of a moralistic cause are worthwhile, one may think, but then this worth can be undercut when the person espousing the views acts against them as well if those actions are more genuine. So, one concern with hypocrisy could be with the falseness of the person.

The second concern is with the good that was being done. If someone works to promote a goal and then reveals themselves to not wholeheartedly support it – in fact, they act against the very ideals they publicly endorse – this can harm the cause. On the small scale, there is a practical matter that the person themselves likely loses the standing to blame others for not living up to the standards they were supporting. On a larger scale, the cause itself could be harmed by the exposure of false supporters.

Recall the outrage when Al Franken, Democratic Senator from Minnesota, was accused of sexual misconduct. His own comments were easily used against him. Countless other members of government have resigned after taking part in activities that they advocated against publicly. There is a personal response, where the integrity of the individual is undermined, as well as a concern about the nature of the cause – why would it have such false supporters?

Breaking the law itself does not exclude someone from serving in government. Just this last week, it has been noted that the candidates this election cycle have a striking record – see articles like “Crimes are no Longer a Disqualification for Republican Candidates” and “Republicans have 4 Convicted Criminals Running for Congress in 2018.”. Government officials may even garner goodwill once in office by serving well, perhaps lessening the outrage or impact of breaking the law.

When you articulate where you stand and stake your character on an issue, the moral failing when you go wrong seems to be worse than if you were just to commit the wrong. You not only have failed to live up to the standards of morality but very publicly have failed to live up to your own standards and have potentially harmed the integrity of the principles you aligned yourself with.