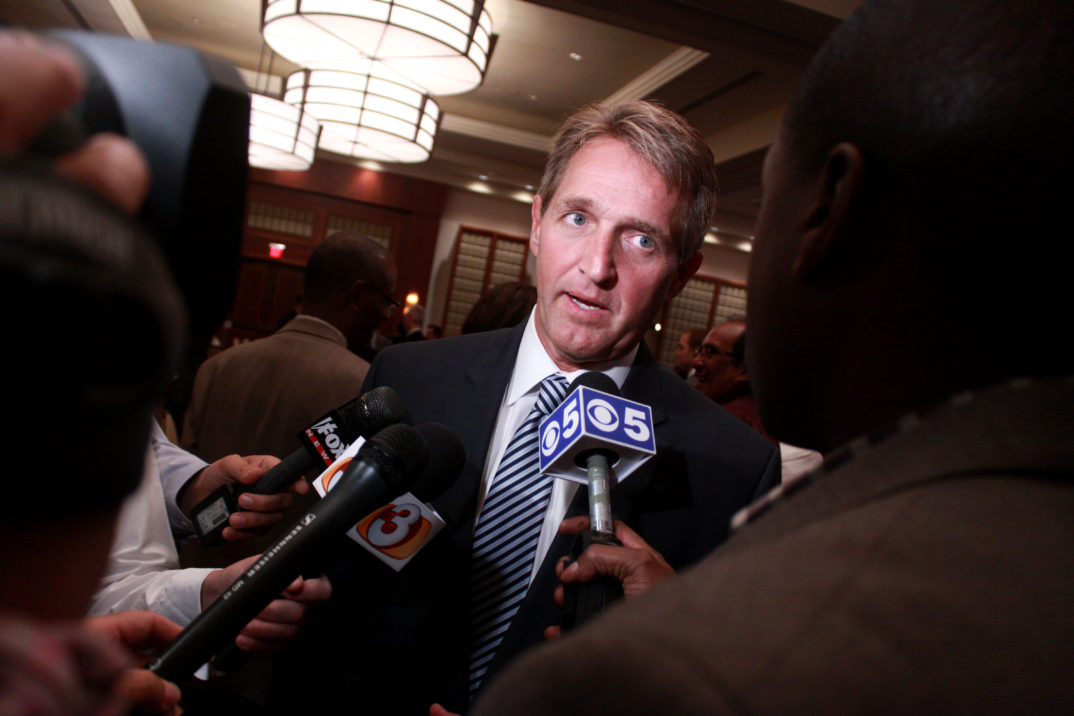 “Jeff Flake” by Gage Skidmore liscensed under CC BY 2.0 (via Flickr)

Last week, Senator Jeff Flake very publicly announced that he would not be running for reelection and then proceeded to denounce the Republican Party and President Trump. In a news interview with the Washington Post, the senator said that “he couldn’t sleep at night having to embrace the president”. He felt that the pressure from the Republican party to support Trump was debilitating. Some may admire his courage in standing up for what he believes in and standing up to his superiors, but it can also be said that he is “abandoning ship” and leaving his party at a crucial time.

Flake was undeniably dignified in his speech to the Senate and said more than once that Trump is taking the Republican party down the wrong path and even said that Trump is negatively affecting the world’s view of the United States. To speak out against your superiors and the peril that they are inflicting takes a great deal of courage. Another critic of Trump and a well-respected Republican, Senator John McCain, praised Flake for his bravery. Senate Majority Leader Mitch McConnell also voiced his admiration for Flake and his strong principles. Despite the political price he would pay, he still stood up for what he believed in and said he would no longer condone the president’s irresponsible behavior. It is a big deal to say something so obviously negative and publicly at that against someone as powerful as the president, so Flake’s speech was a courageous act.

However, one could also say that Flake is abandoning ship and giving up on his party. He may have had a target on his back as Trump critic, but he still had the ability to represent the Republican party in a positive way and continue to vote on traditional conservative legislation to maintain the party platform that he supports. President Trump mocked Flake and said that him announcing retirement was “the right thing for himself”. In a sense, Flake gave into Trump by waving his white flag; as courageous as his speech may have been, he surrendered. There is a longer conversation that must be had regarding the state of American politics, and Flake walked away from that conversation.

Flake probably would have not been re-elected in 2018 due to pro-Trump forces and a Republican opponent in the primary. However, instead of trying to voice his opinions and concerns to the voters during the election season, he retreated. He gave up at a time when the Republican party needs traditional and moderate conservatism. He could almost be called cowardly in doing so.  If he believes so strongly that Trump is unfit to lead and demolishing the moral foundations of the United States, why is he leaving when his party needs him? In order to maintain the credibility of the Republican party and conservative politics in general, the party truly needs a strong coalition of lawmakers that are willing to stand up to Trump.

Senator Flake certainly acted fearlessly with his strong words, but in doing so, he gave up his ability to change the political climate. Instead of riding out the storm, Flake abandoned ship and the other Trump critics in the legislative branch. He should not be condemned for his bravery, but it should be acknowledged that he could have done more.