A Controversy around the Cheerleading Industry 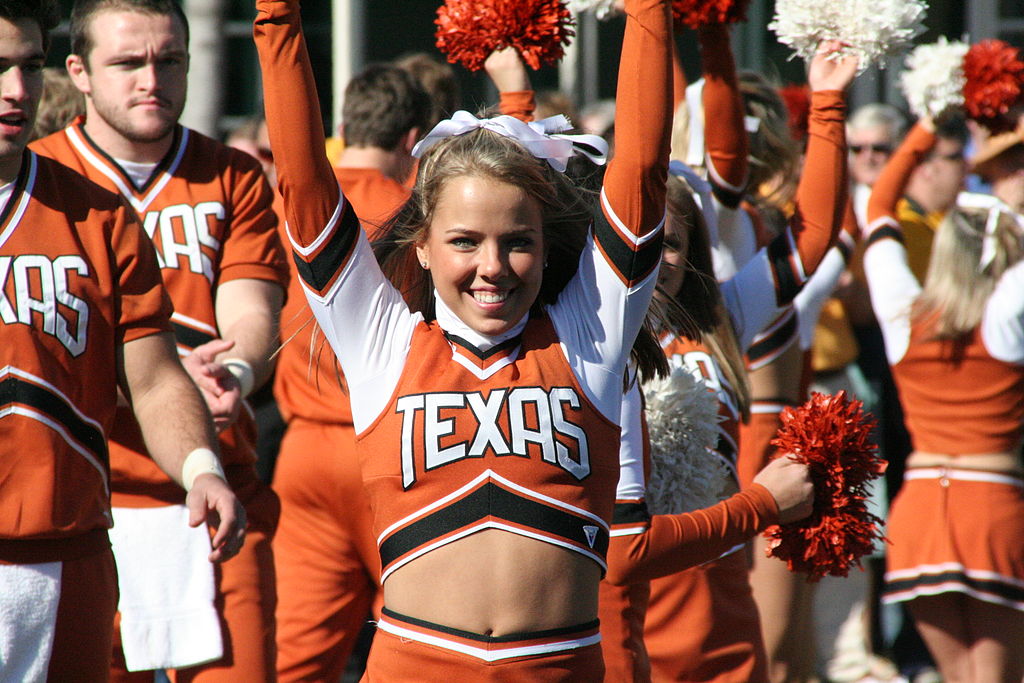 “UT Cheerleaders San Diego” by Johntext is licensed under CC BY 2.0 (via Wikimedia Commons)

It is not uncommon to see cheerleaders at every professional sports game. They usually comprise young, mostly white women who have a profession outside their cheerleading careers. A game pamphlet typically has information about the team’s cheerleaders – not only their names and pictures, but also their occupation and age are made public.

As an example, let’s take a look at the Colts website introducing its cheerleaders. The cheerleaders in the photos wear clothes that reveal a lot of their skin. Is the team trying to make them look sexually attractive? Their dance moves can also be interpreted in a sexual way. Each cheerleader has biography of herself on the website, which says her name and the three adjectives she would use to describe herself. A lot of those adjectives are so-called feminine traits like caring, thoughtful, warm, kind, or sweet. What type of messages do cheerleaders potentially deliver to the public, especially to young women, and should we be concerned?

One of the messages that cheerleaders are possibly delivering is a denial of women’s success in a professional career. Not that cheerleading isn’t a professional career; however, how it’s presented makes it seem as though women must be sexually attractive to men (or women) even if they have an excellent professional career. This leads to a second message, which is a denial of women’s independence. Featuring their feminine traits as an attractive quality rather than how they excel as professionals in the workplace limits the definition of attractiveness for women. Third, all the cheerleaders have the same body type and fall into the certain range of ages. It limits a scope of attractive body type image and age, rather than teaching women they are all beautiful in their own way at any point of their life. Fourth, the majority of cheerleaders (at least for the Colts) are white and female. Is having more female cheerleaders because of males’ reluctance to choose such a career, or from the lack of opportunities for men wanting to be a NBA cheerleader? Additionally, how inclusive is this job for trans women? Is having more white individuals because there are more white individuals who pursue cheerleading careers, or is it because the employer does not choose to hire non-white individuals?

Altogether, could the current cheerleading industry be seen as objectification of women as well as contribute to discrimination? However, there are some oppositions to the idea of cheerleading objectifies women. Instead, the opposing party usually argues that it is the individual’s choice to choose this career. So then, should we not be concerned at all?

This discussion does not end within the NBA. In 2013, CNN’s Tom McGowan discussed some controversy around the NFL cheerleaders. The article introduces different perspectives on these cheerleaders – one views them as “an echo from an age of sexism and misogyny”, and the other views it as a great professional opportunity for dancers to pursue their passion. The article also quotes from one of the NFL cheerleaders saying that cheerleading uniforms are designed that way to enable different body moves required in cheerleading dances. The cheerleader also mentioned that they take a lot of pride in their uniforms to represent their team.

This whole controversy also takes place in the areas outside the cheerleading industry. For example, when Hollywood actor Emma Watson went nearly topless for the Vanity Fair photoshoot, we saw many criticisms targeted at her going around the Internet. In response to those criticisms, Emma Watson said to The Guardian, “Feminism is not a stick with which to beat other women with. It’s about freedom, it’s about liberation, it’s about equality. I really don’t know what my tits have to do with it.”

If we apply Emma Watson’s argument of feminism for the controversy around the cheerleading industry, then it may not be too appropriate for outsiders to point at cheerleaders and put our concerns on them. Rather, it might be a matter of issues to consider: if whoever wants to pursue a cheerleading career has to face no barrier to do so; if cheerleaders feel empowered to pursue this career; if they are able to provide a full financial support for themselves and their families just with this job; and if their concerns or opinions are reflected in the workplace. We might want to also consider why there are almost no cheerleaders for women’s sports games and how that could potentially expand the horizon for more aspiring cheerleaders to pursue their passion as their career.