Reckoning with the Legacy of Derek Parfit 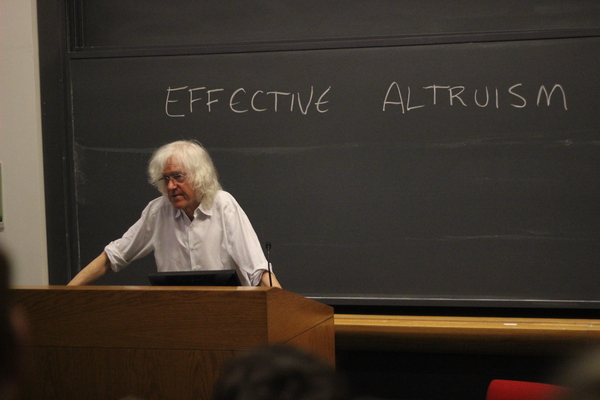 “Derek Parfit at Harvard” by Anna Riedl is licensed under CC BY-SA 4.0 (via Wikimedia Commons)

Philosopher Derek Parfit died on January 1st. Let us hope he will go to heaven. Will he? Parfit, who was an agnostic, was not much concerned with the existence of heaven or hell. But, he did famously argue that, even if such places do exist, the person going there would not be the same person who previously died. And, thus, someone would be punished or rewarded for the deeds of another person. This is deeply unjust, as unfair as sending someone to prison because of the crimes committed by his identical twin brother.

Parfit’s magnum opus, Reasons and Persons, is replete with some of the most intriguing thought experiments in the history of philosophy. Perhaps the most celebrated of all is the “teletransporter” thought experiment. Most religious apologists believe that, even if we go to heaven (or hell) with a different body, as long as we keep the same mental contents, we would still be the same person who previously died. After all, as John Locke pointed out in one famous thought experiment, if a cobbler wakes up in the body of a prince, he would still be a cobbler.

Yet, Parfit challenged this reasoning. Think about the teletransportation machine from Star Trek: this device takes you somewhere else by making a replica of yourself in another location, and then painlessly destroying your original self. But, what if the machine makes two replicas, A and B? Who would you be, A or B? If we apply Locke’s criterion, you would be both, as both persons have the same mental contents as the original one. But, this is absurd: you cannot be both. Furthermore, if you choose A, then why not B?, and vice versa.

Parfit argued you would be neither. In fact, personal identity is not preserved from one moment to the next. Parfit defended the so-called “bundle theory of self”. According to this theory, also held by Buddhism and David Hume, the self does not exist, but rather, is just a bundle of properties, i.e., mental contents in succession with no real unity. The person going to heaven may have memories of life in Earth, but that person is not the same person who lived previously.

This has deep ethical implications. How can we justify punishment, if there is no continuity of the self? Parfit did not propose the abolition of punishments altogether. In his view, identity is more a matter of degree, and if a criminal is sufficiently close to a prisoner in terms of identity, then punishment is justified. But, he did argue that we should consider whether punishing someone for crimes committed a long time ago is really moral. Can a 95 year old SS officer be held accountable for the crimes he committed more than half a century ago? Is he really the same person? Parfit did not think so.

Inasmuch as you are different from one moment to the next, you should not be so concerned about the welfare of your future self, as that is not really you. Instead, you should be more concerned about the welfare of a greater number of persons now. Those persons should be more important to you on account of their numbers: your future self is just one person, whereas all those other people amount to a greater number. It is pointless to care especially about your future self, because that person is as different from you as all those other persons now. Parfit was thus a utilitarian, in the sense that ethical preference should be given to greater numbers, even if that implies a reduction of our self interest. He hoped for impartial and impersonal ethics.

Parfit was famous for yet another ethical dilemma. Should our descendants complain for the messed up world they will inherit from us (say, due to global warming)? Our future generations may have terrible lives, but they will not be ethically authorized to complain. For, if we did not do what they will be complaining about, they would not even exist in the first place. If we avoided global warming, that would alter the chain of events, and other people would have been born. Or, as someone may put it in simpler terms: should a person conceived by rape, rebuke his mother’s rapist? If it were not for the rape, she would not exist in the first place. Yet, it would be absurd for a judge to accept such an excuse at a rapist’s trial.

In this very brief space, I can only oversimplify Parfit’s complex philosophy, full of arguments and counterarguments, often written in opaque style. I exhort the reader to turn to his work, but I will understand if, after a few pages, the reader gives up. Yet, no doubt, Parfit will be remembered as one of the greatest philosophers of our time, and his work will have an enduring impact on the field of ethics.