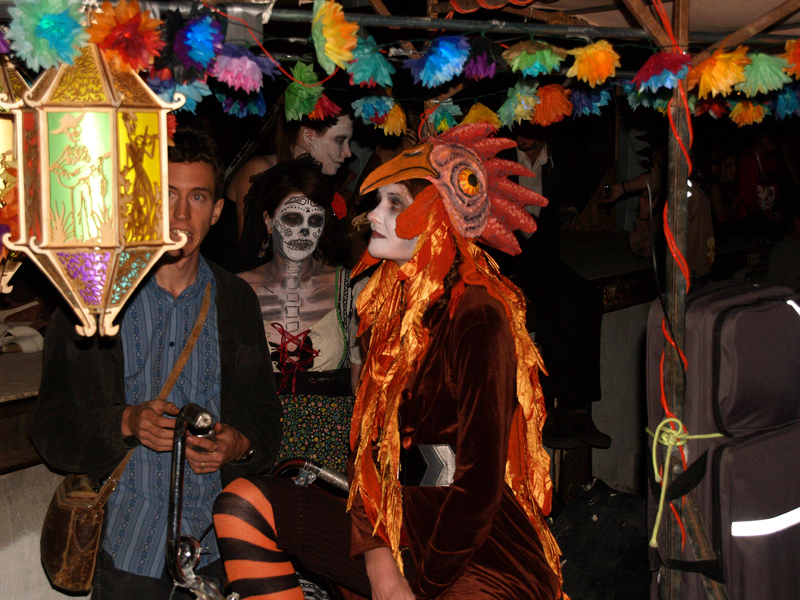 El Día de los Muertos (The Day of the Dead) was originally an ancient Aztec tradition which celebrated the passing of loved ones from years past. Over the last 3,000 years, the tradition has spread from southern Mexico up through northern Mexico and has combined with Christian practices as well. It used to occur in the beginning of the summer, but has since shifted to align with All Souls Day, also known as All Saints Day. Despite the tradition’s longstanding history of adaptation and change, Tuscon, Arizona’s 26th All Souls’ Procession, a celebration of the community’s deceased loved ones, was greeted with disapproval from some for alleged cultural appropriation of Mexicans. How legitimate are these allegations?

Tucson.com’s Andi Berlin sought to hear opinions on the All Souls’ Procession from scholars and participants alike in his article, “Is Tuscon’s All Souls’ Procession cultural appropriation?” One of Tucson’s All Souls’ Procession volunteers stated that “the procession is a gathering of many cultures, many beliefs and has never held its roots with Día de los Muertos.” Pictures from the ceremony, however, depict many traditional aspects of el Día de los Muertos, such as sugar skull face painting and drinking alcohol in fond remembrance of the dead. Especially because the event is not specifically affiliated with the established practices of el Día de los Muertos, many critics claim that participants do not fully understand what they are doing when they paint their faces with the quintessential sugar skull makeup, thereby “thoughtlessly claiming the culture of the oppressed.” Berlin cites another critic, a professor at the University of Arizona, who said that, by taking aspects of el Día de los Muertos, cultural gentrification occurs. In this light, it is unacceptable to adapt parts of foreign cultures’ holidays to a new tradition.

On the other hand, one Hispanic woman told Berlin that the procession has helped her teach her own children about the essence of el Día de los Muertos. A woman who traveled from Chicago for the All Souls’ Procession told Berlin that she is Mexican but was brought up by non-Hispanic Mormons, and she views this ceremony as a way to interact with her heritage. Another person spoke to Berlin, stating that Tucson has close ties to Mexico, and in that manner the procession displays the city’s heritage. It seems only natural, then, that these people would pull from their own cultural heritage into this new place. These roots are evident in Tuscon’s 41.6% Hispanic or Latino population. Furthermore, the majority of people with Mexican heritages Berlin interviewed were enthusiastic about and supportive of the All Souls’ Procession. Several of the critics, however, were not of Mexican heritage and highly educated. This could be due to Berlin’s random selection for interviews. Regardless, should these highly educated individuals have more to say on the cultural appropriation of the All Souls’ Procession than those of Mexican heritage? To what extent should cultures be able to pull from and participate in others’ cultures?

Johnny Wagner from The Concordian answers this question in the context of St. Patrick’s Day—a holiday typically celebrated by white people originating from white, Irish culture. He says that if an Irish person is offended, than the action a non-Irish person is performing is considered appropriation. He goes on to state that St. Patrick’s Day is difficult because while the Irish came to America as marginalized minority, he has not heard of an Irish person taking offense to the way Americans celebrate St. Patrick’s Day. Everyday Feminism supports the notion that cultural appropriation includes a “power dynamic in which in which members of a dominant culture take elements from a culture of people who have been systematically oppressed by that dominant group.” In this way, St. Patrick’s Day falls into cultural appropriation because of their discrimination from previously-settled Americans upon their escape to America from the Irish Potato Famine. Wagner’s additional point about not hearing Irish people complain of cultural appropriation, however, is an interesting component to whether or not something can be culturally appropriated if the group is not voicing or does not feel appropriated. Katherine Timf from The National Review says that Wagner’s notion that “anyone who offends another person is, without exception, “wrong” just because that other person was offended… is a frighteningly stupid thought.” She posits the opposite–that offense taken does not indicate any real faux pas made.

Should Tuscon’s demographic and support of Mexicans or those with Mexican heritage influence whether or not the procession is cultural appropriation? Are those without any Mexican heritage able to borrow the beautiful tradition? These are important questions that can be extrapolated to all of the tough conversations society is having right now about cultural appropriation, whether it be fashion, hairstyles, or even sports in one case. Does one culture get to claim for themselves their practice of honoring the dead, forbidding others to practice in this manner? Can one culture use historic pieces of dress from another for their own wardrobe? How far is too far in claims of cultural appropriation?