Relying Too Much on Polls Doesn’t Serve Public 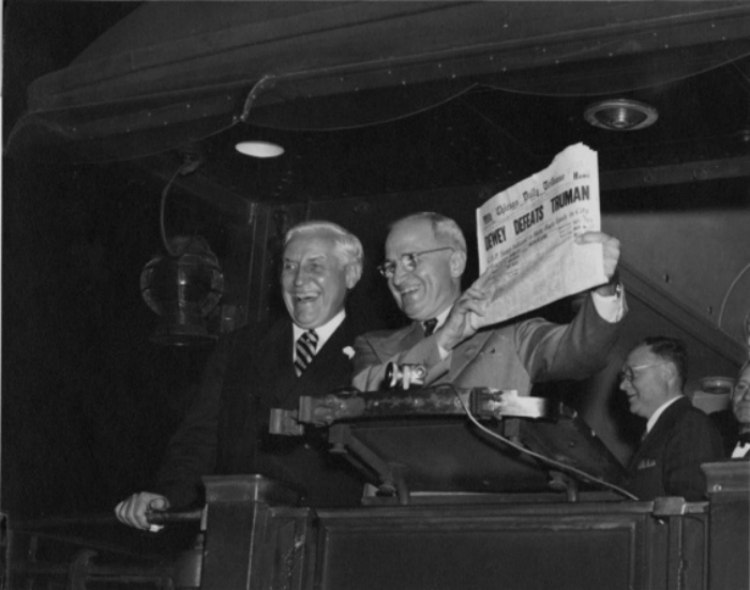 “President Harry S. Truman, shortly after being elected as President, smiles as he holds up a copy of the Chicago Tribune issue predicting his electoral defeat. St. Louis, Missouri, on November 3, 1948.” Photograph held by The Harry S. Truman Museum and is licensed under public domain (via Wikimedia Commons)

Every major broadcast and cable network, and many major newspapers, feel compelled to sponsor their own political polls. But the polling conducted today by news outlets and universities does little to serve the public interest. The polls do, however, serve the branding and marketing interests of the sponsoring organizations. That financial motivation drives the polling frenzy more than any sense of civic duty. When CNN, Fox News or NBC releases periodic poll results, the news channels benefit from having those results reported across the journalistic world, raising the profile of the respective news outlets.

Polls provide journalists with something to report about, fill time and endlessly analyze. That’s easier for news organizations than covering issues and providing election news of substance. Such “horse race” coverage diminishes the process of democracy to the level of a sporting event.

Citizens and political analysts alike have bemoaned the media’s poll obsession, but the journalistic world nonetheless pushes ahead with a vacuous agenda. A report this summer from Harvard’s Shorenstein Center on Media, Politics and Public Policy concluded “coverage of the primaries focused on the horse race over the issues — to the detriment of candidates and voters alike.”

Reporters exaggerate the importance of fluctuations in poll numbers, looking for storylines about momentum or how a random candidate remark might have changed a campaign’s polling trajectory. Such overanalysis ignores the statistical noise associated with polling. A poll’s margin of error, a key factor in any data set, is seldom explained and sometimes not even reported. Maybe that is because most television reporters have minimal understanding of statistical processes.

The media could better justify their poll mania if the polls proved to be predictive. But polls in the recently completed presidential primary season consistently understated support for Sen. Bernie Sanders. He won the Michigan primary despite trailing in the Real Clear Politics average of major polls by more than 20 percentage points. Polling failed to capture Trump’s push into the early GOP primary season. Polls whiffed last year on the Kentucky governor’s race. Brexit polls missed the mark in the United Kingdom. None of this is to say that polls are always wrong, but polling inconsistency should prompt journalistic pundits to tamp down on the deluge of polling news.

A major problem with polling accuracy today is that growing numbers of Americans refuse to have their opinions compiled into a pollster’s database. The Pew Research Center reports that the response rate for public participation in polls is now just 9 percent. The rate was 36 percent 20 years ago. Multiple reasons account for this decline. Fewer people have landline phones. Caller ID allows people to ignore calls from numbers they suspect as nuisance calls. Citizens are more prone to keep their opinions private in an era of polarization and fear of the establishment. The bottom line is that it is harder for even the brightest statisticians to verify that people who are willing to answer pollsters’ questions are representative of the people who aren’t.

Then there is the matter of whether polls simply reflect public sentiment or play a role in pushing citizen opinion. NBC pollster Peter Hart argued at a Harvard seminar last winter that poll results don’t sway public views. Given the polling misses evident in recent history, that claim is plausible. Common sense and human nature, however, suggest otherwise. There is a reason why winning football teams play in front of full stadiums. Casual voters or undecideds could well become bandwagon supporters of a polling leader. This normative effect may influence a mere handful of voters, but that would be enough in elections determined by small margins.

A news media that wants to serve the public should focus coverage on issues and candidate qualifications. The only essential poll that demands a place on the news agenda is the one taken on Election Day, when the voters speak through their ballots.