Open Mike Eagle, Race and Getting the Joke 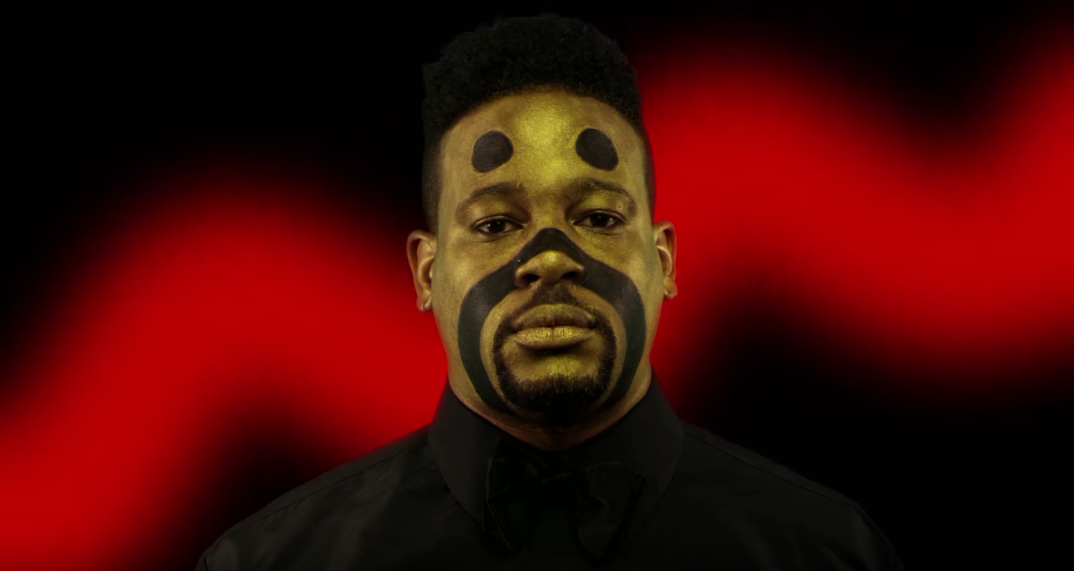 Not many understand Open Mike Eagle’s humor on its face. The rapper says as much on the opener to his 2014 album, Dark Comedy, rapping that he needs to “Add a lol cause nobody seems to know when I’m joking.” Indeed, Eagle’s deadpan style, as well as the density of cultural references and wordplay in his work, can make parsing out a verse’s punchline an exercise in literary interpretation upon first listen.

Yet the sharp humor on display throughout albums like Eagle’s Dark Comedy speaks for itself. On “Doug Stamper (Advice Raps),” he advises the listener to “never buy weed from a guy named Mortimer.” In the refrain of “Qualifiers,” he plays on hip-hop’s braggadocious tropes by directly imploring the listener to “respect my qualifiers.” The album’s featured artists also include Hannibal Buress, a standup comedian who has worked with absurdist late-night host Eric Andre; Eagle recently appeared on the pair’s show, rapping blindfolded over a Kiddie Pool filled with snakes.

For all of its comedic flourishes, however, Eagle’s music also wades into exploration of serious topics. Many of his songs feature messages about the difficulties of being black in the United States; on the 2015 “Dark Comedy Late Show,” for example, Eagle raps about how “You can see us on the news feeds, f***ing y’all’s mornings up / until America admits that it likes dogs more than us.” In the following line, he speaks of seeing “the Super Bowls of the future / the Ferguson Blacks versus the Missouri State Troopers” – a line that not only speaks to recent incidents of police brutality, but also draws parallels to controversies surrounding use of Native American iconography for sports teams. While the presentation may sometimes be less serious than that of other artists, Eagle’s raps are hardly lacking in such pointed commentary.

The pairing of race and humor throughout Eagle’s work may seem strange at first. Yet the two topics merge seamlessly on albums like Dark Comedy, making lines about hitting the Koch brothers with a rubber hose and the media’s failure to document killings of people of color in Chicago seem like a natural juxtaposition.

This pairing becomes especially clear in the final verse of “Dark Comedy Late Show,” in which Eagle assumes the persona of a monologuing late-night host. After including shoutouts to the artists produced his music, Eagle concludes by rapping that “the studio audience knows what I’m laughing at.” The song is not the first time he employs the phrase; a similar line also appears prominently on “Dark Comedy Morning Show,” in which Eagle notes that many of his fellow rappers already “know what I’m laughing at.”

Upon first listen, Eagle’s use of the phrase might only seem to be a shout-out to his colleagues. Yet the juxtaposition of the phrase and the candid assessment of race in America on songs like “Dark Comedy Late Show” provides a telling metaphor through which conversations about race garner new clarity.

In a typical conversation about race, a phrase along the lines of “I will never understand what you go through” often stands as a default acknowledgment of difference. Doing so offers a means of recognizing the difference in another person’s experience, no doubt a valuable asset in conversations on race. Yet conceptualizing such conversations in terms of understanding alone also creates barriers that are difficult to move past. If one is incapable of even understanding another’s experience, little can seemingly be done to bridge such a gap.

For all that understanding might convey in starting conversations about race, it lacks specificity. Understanding, after all, can take multiple forms. Among them is an intellectual sense of understanding – of knowing the root causes of police brutality against people of color, for instance. Despite its usefulness, this notion of understanding cannot adequately explain the gap between a person trying to understand racism from a distant viewpoint, and those forced to know it from their everyday experience. To best explain this nuance, more is needed than simple understanding.

It is here that the language Open Mike Eagle employs – knowing what the artist is laughing at – is especially useful. Just like various understandings of race, multiple forms of “getting” a joke exist. People can generally understand why a joke is funny, even if they need to have the punchline explained to them. Yet genuine laughter is largely instinctive, brought in response to an intuitive understanding of a joke’s context. Anyone who has ever told a joke and heard a forced laugh in response likely knows this distinction well. Yet knowing why the punchline is funny, even if it has to be explained, is still a valuable step that cannot be discounted.

Conceptualizing conversations about race in a similar manner offers a number of benefits. Instead of focusing solely on immutable differences in understanding, conceptualizing race as a process of getting the joke offers the possibility to find common ground. If a person unaware of issues surrounding race can learn to understand its dimensions as one might learn why a punchline is funny, she can gradually make progress towards making that knowledge an intuitive understanding. Conceiving knowledge of race in this manner avoids the pitfalls created by understanding-focused language, creating an emphasis on fostering growth over insurmountable differences of background.

Certainly, differences in knowledge between those who experience racism and those who do not must be addressed. Yet doing so through a simple dichotomy of understanding fails to foster a path towards mutual understanding. And while achieving an intuitive understanding of race is critical in fighting racism, using different language to think about understanding can help make such a goal more achievable.

Performing live in a technicolor van in 2015, Open Mike Eagle deviated from the traditional lyrics of “Dark Comedy Late Show.” Most of the song, which the rapper performed while simultaneously mixing and modifying the background beat, remained unchanged. Yet, when Eagle reached the final line, he shifted the song slightly, rapping that “I hope the studio audience, they know what I’m laughing at.”

Since that performance, we have seen more unarmed people of color killed by police, more police absolved of wrongdoing in their deaths. More incidents that fray what little trust remains between communities of color and a society that remains unresponsive to their pleas to be seen as human.