In Defense of the Unpalatable: Protection of Hate Speech 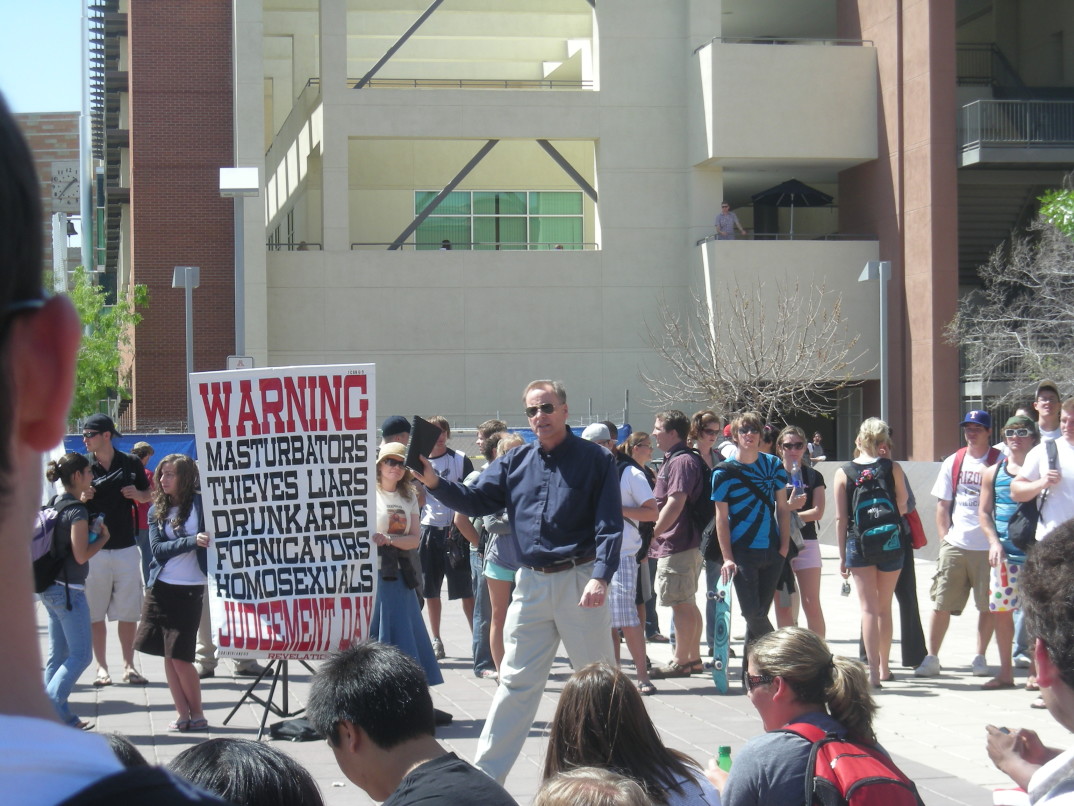 On Wednesday, a group of fundamentalist Christians picketed the DePauw University campus, holding signs decrying the sins of “masturbators”, “feminists”, “pot-heads”, and “baby-killers”, while shouting at pedestrian women to “stop being whores” and to accept that “your sins are your fault, not your boyfriends.”

Anyone considering themselves an opponent of fundamentalism and bigotry would have felt a pang of disgust at the idea of a group so sure in their intolerance that they felt the need to impress it upon everyone else—but there was also pride for the DePauw community, that students assembled and rallied against the hatred present.

The issue raises an important question, however. What is the role of hate speech in American politics? Whether it be the Westboro Baptist church or the rather grassroots operation that appeared at DePauw, hate speech forces us to reconsider how committed we are to the beliefs we profess ourselves to hold.

When something so shocking, so filled with anger, so nonsensical and so irrational confronts us, we have the option to take a stand—literally—or sit on the sidelines and appreciate the moment for exactly what the fundamentalists intended it to be—a spectacle.

There are countries that have laws making hate speech illegal. The rationale is that hate speech contributes nothing to dialogue, that it engenders violence, and that it has no place in a modern, liberal society.

But I disagree. I think that hate speech serves a fundamental purpose in a functioning civil society. It is useful because it is so vile and disgusting that it elicits a response within us that compels us to confront the hatred. How many people would have spoken out that day had they not been prompted by a group of sign toting radicals? Hate speech challenges us to come together, raise our fists, and say this is not right.

It is hard to understand how anyone in this day and age could sympathize with the views held by the visiting fundamentalists. That being said, their views toward women, minorities, and homosexuals are an all too common undercurrent of American society. The problem is that unless people see the ugly face of intolerance up close, it becomes something that flies under the radar of day-to-day life.

Our society should strive to own up and challenge this hatred, rather than shut it out. It should serve as a barometer for our own conscience and the disgust we feel should remind us that the journey to a tolerant society is far from over. Whether it is racial intolerance, religious fundamentalism, or women’s rights, the burden falls on no other shoulders but ours.

Hate speech is disgusting, as were the actions of Wednesday’s protesters. It is hard to imagine living a life where the two constants are 1) your desire to spread hatred to others and 2) your unwavering belief in your own righteousness. That being said, hate speech is a projection of our society, not an influence; we are far better off bringing the hate to light and addressing and confronting it than we are going about our lives, content to let it rot under the surface.