A Student Perspective on Trigger Warnings 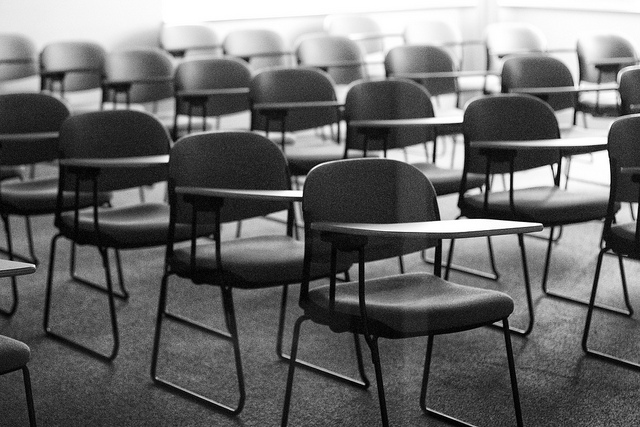 I first encountered the classroom trigger warning in the fall semester of my junior year. The course in question covered humanitarian intervention, a particularly dark topic amongst any number of dismal subjects in political science. As a result, soon after talking through the syllabus, our professor made special mention of the topics at hand. The classes to come, we were told, would cover a number of heavy topics: genocide, ethnic cleansing, wartime rape and other forms of systematic violence. Reading about such material on a daily basis, the professor warned, could be emotionally upsetting. Drawing attention to this fact wasn’t an effort to silence the topics or distract from their discomfort. In communicating their emotional gravity, our professor was simply trying to prepare us, encouraging us to keep tabs on our mental well-being as we proceeded through each difficult discussion.

Making the emotional nature of the class clear was a choice I appreciated, and I’m sure others in the class did, as well. But it is also a choice that, in recent months, has come under fire. Warnings about potentially sensitive or traumatic content, commonly known as “trigger warnings,” have become a flashpoint of controversy in larger debates about political correctness in education. The most recent critique of the practice came in an article in The Atlantic, in which Greg Lukianoff and Jonathan Haidt argued that universities should “strongly discourage” the use of trigger warnings. Using them, they argue, works to shield students from ideas they may find uncomfortable, in effect creating a “coddling of the American mind.”

Lukianoff and Haidt’s points seem shocking. The examples in their article – law students pushing Harvard professors not to use the word “violate” or an IUPUI student being charged with racial harassment for reading a history book with a Ku Klux Klan rally on the cover – seem to point to a rampant culture of political correctness gone too far. At the root of such problems, they argue, are practices like trigger warnings – practices that allegedly silence controversial discussions in the name of emotional comfort.

In some form, the trigger warning could easily bring about the problems that Lukianoff and Haidt describe. Indeed, if they are intended to produce the silencing environment that they point out, such techniques should be reconsidered. However, the path Lukianoff and Haidt illustrate is only one of many that trigger warnings can create. And, if contextualized properly, such warnings can ultimately spark better critical discussion within the classroom, not silence it.

I was familiar with trigger warnings before I first encountered them in the classroom. They have become a fairly popular phenomenon on social media, especially on blogging sites like Tumblr. For a user with lingering trauma, unexpectedly encountering triggering material on Facebook or Tumblr could be particularly damaging. By explicitly making clear what a particular article covers (usually found in a caption at the beginning of a text, such as “TW: Rape”), trigger warnings act to make identifying this content without reading it easier. In environments where it is not expected, such warnings are particularly valuable. They allow users to choose whether to engage with sensitive of traumatic content – a goal that, for people who still experience lingering trauma, is a particularly valuable one.

While the classroom may be a different environment than an online blog or social media website, the intent of trigger warnings within it would be largely identical. However, classroom trigger warnings differ from the online variety in one crucial form: in the classroom, students expect an intellectual, and usually challenging, discussion of class material. When properly implemented, trigger warnings hardly get in the way of this expectation. In fact, they ultimately allow people who may be traumatized by certain topics to prepare and, hopefully, participate in the discussion if able. If no such warning is included, such students could easily be blindsided by triggering material, which would likely lead them to avoid participation in discussions in the first place.

In this regard, banning trigger warnings would hardly be a solution to the problems Lukianoff and Haidt describe. If no warnings are incorporated, a student forced to confront past trauma may be present for the discussion. But will he or she actually participate in the type of critical thought Lukianoff and Haidt argue for? Most likely not. Chances are strong that he or she would simply shut down, choose not to participate, or even skip the class altogether. With inclusion of a trigger warning, however, such students would have the opportunity to emotionally prepare themselves for the discussion or, if necessary, seek out support from the professor – a result far better than failing to support them entirely.

Trigger warnings do not just benefit students who may be traumatized by sensitive subjects. They also alert all students that, regardless of their beliefs, the topics to follow are incredibly sensitive for some. If communicated properly, such warnings would show students the dangers of discussing these issues carelessly or without regard for others’ experiences. In doing so, they help create a more equitable environment where critical thought can take place between students for whom past traumas would otherwise prevent discussion. As a result, careful use of trigger warnings could act as a tool that enhances critical thought and discussion, rather than stifling it.

Certainly, such warnings must be properly structured and contextualized if they are to be effective. Trigger warnings do not spell the end of the discussion, or at least they shouldn’t. If applied too strongly or without any followup discussion and support, they can be misused to shut down uncomfortable or controversial beliefs. If Lukianoff and Haidt’s essay is any indication, implementing such warnings without surrounding support could easily lead to this option. Instead, trigger warnings must be given proper context – context that, while making allowances for potentially traumatized students, also makes clear that critical discussion is expected. If used to help spark discussion, and not to shut it down, these warnings can prove a potent teaching tool.

It appears, then, that there may be more to trigger warnings than Lukianoff and Haidt suggest. Yes, as college students, we want to be challenged. But we also want a classroom environment where everyone can feel comfortable enough to engage with the topics at hand. A challenging space doesn’t have to be mutually exclusive to a comfortable one. In fact, I would argue that some level of comfort is necessary to engage in truly challenging and thought-provoking debate. Students must feel emotionally prepared for the topics they are about to cover, including knowing whether the ideas presented may bring up traumatic or disturbing feelings.

Even within tough conversations, where discomfort is meant to produce critical thought, establishing this basic level of accommodation is extremely beneficial. Trigger warnings help create this space and set a common environment of dialogue for the classroom – one in which both students affected by trauma and those looking for a challenging discussion can feel supported enough to speak up. And whether one agrees with political correctness or not, the benefits of fostering such an environment are difficult to deny.