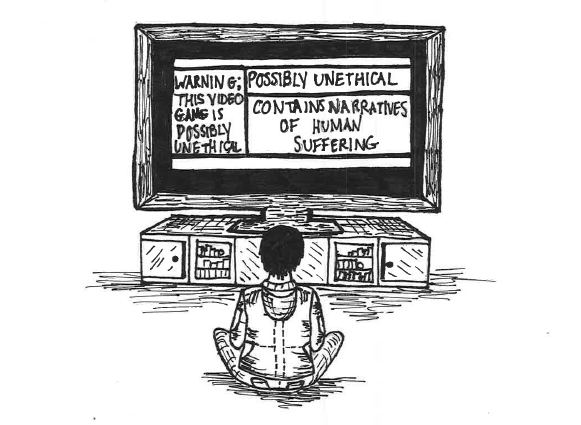 The conflict in Syria is a humanitarian catastrophe on a massive scale, with hundreds of thousands dead and millions of others forced to flee their homes. Recently, the BBC has attempted to expand the impact of the Syrian narrative by tapping into an intimate intersection between humans and technology: the video game. Journalist Mamdouh Akbiek and researcher Eloise Dicker have created an interactive, storybook-style game in which users make choices for their virtual family of refuges as they attempt the journey from Damascus to Europe.

The game, entitled Syrian Journey: Choose your own escape route, has come under fire from critics who say that it trivializes the horrors faced by refugees everyday. One expert on the Middle East suggests in the Daily Mail that “the decision of the BBC to transform the human suffering of literally millions into a children’s game beggars belief.” Is it morally permissible to construct a video game around a narrative of human suffering? Does connecting to these characters via digital interaction foster empathy, or belittle the reality of these experiences?

In an article by Keith Stuart, he argues that these interactive dialogues are nothing new, and in fact may be the next big development in news media. He insists that video games have matured over the last 40 years into a truly artistic medium, and criticism from conventional news sources is nothing more than, “old-fashioned moral panic.”

I agree that video games could offer a unique opportunity for user engagement within certain contexts. In the case of Syrian Journey, the game is not marketed to children, nor presented as pure entertainment. It is designed as an informational experience, meant to connect the user to a minimal understanding of the harsh decisions that Syrian refugees are forced to make. Mass media in the 21st century has become increasingly pervasive, utilizing technology to wedge itself more deeply into the cracks between culture, society, and politics. Video games may be the next step in this process.

People are no longer satisfied with static media, but seek sources of information that allow a two-way dialogue. The ability of video games to escape linear narratives could allow for more nuanced story telling, and plugging-in could force engagement on a deeper and more intimate level. Making decisions within the confines of virtual reality could lead to a more complete understanding of the human side of the story. As stated by Stuart, “Games offer a range of ways of taking on a topic that linear forms can’t – putting you in the shoes of another person…”

However, moral problems may arise from the selfishness of the user. Eventually players may demand less engagement with the topic and more entertainment, skewing the integrity of the interaction as a whole. Developers may come to exploit these narratives of suffering, as those privileged enough to have access to these technologies demand their next virtual challenge.