Dartmouth Bans Hard Liquor On Campus — What Could This Mean for DePauw? 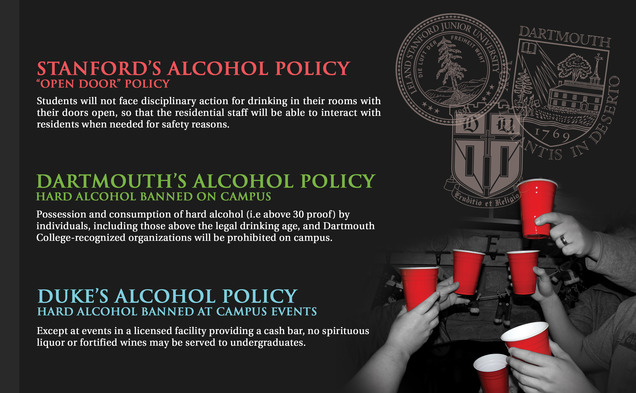 Recently, Dartmouth’s president, Philip J. Hanlon, banned hard alcohol across the entire campus and implemented  mandatory four year sexual violence prevention and education programs. By banning all alcohol with a 30 proof or higher for everyone on campus, regardless of age, President Hanlon hopes to rid Dartmouth of its party school reputation and take strides against sexual assault.

Despite a national trend of universities revising their alcohol policies, Dartmouth is the first Ivy League school to ban hard liquor completely.  Although Dartmouth’s initiative seems noble, there are many people who are skeptical of its potential to succeed. Dailycampus says,  “There are certainly important goals behind Moving Dartmouth Forward, however the hard liquor ban may not be effective. The New York Times predicts that not many institutions are expected follow Dartmouth’s lead. Universities and colleges should work on creating a healthy relationship between the administration and students and advocates for smarter, more responsible drinking rather than outright bans such as this one.”

I was most surprised to discover the great similarities between Dartmouth and DePauw University. Both have a “party school” reputation, heavily populated greek life,  and the majority of the students live on campus. After defining these similarities, I began to wonder if DePauw would ever follow Dartmouth’s lead to ban all hard liquor, and if so, what that would mean for DePauw as a whole. Personally, I find it hard to believe that a policy like this would have very much success at DePauw. And truthfully, a majority of students choose DePauw for its “work hard, play hard” mentality. Regardless of if it was intended or not, the party culture of this university adds to the “DePauw Experience;” it is something we hold special to us, as it sets us apart from our liberal arts counterparts. With that being said, revised regulations on “party policies” do have the potential to reduce sexual assault. But even with that, blogger Maddie Pickens explains, “sexual assault is not caused by alcohol.. In reality, the solution to the problem of sexual assault on college campuses is not as simple as eliminating hard liquor or keeping students home from parties. Let’s treat rapists like rapists — they’re in the wrong, not hapless victims of binge-drinking culture. Universities should forward policies that emphasize that basic fact, including those that allow for outreach, education and support of victims.”

Banning hard liquor from the entire campus would have the potential to get rid of any “party reputation,” but that could also mean a decrease in student applications. It could also mean more students drinking more aggressively and behind closed doors.  College students are going to drink. 21-year-olds are going to drink. Banning hard liquor would only create a more dangerous and secretive setting to do so in.  Nonetheless, it is still too early to speculate the results of this new initiative but I am eagerly awaiting to see how it all turns out. Let us know what you think of this in the comments below!