A Libertarian Argument for Public Education 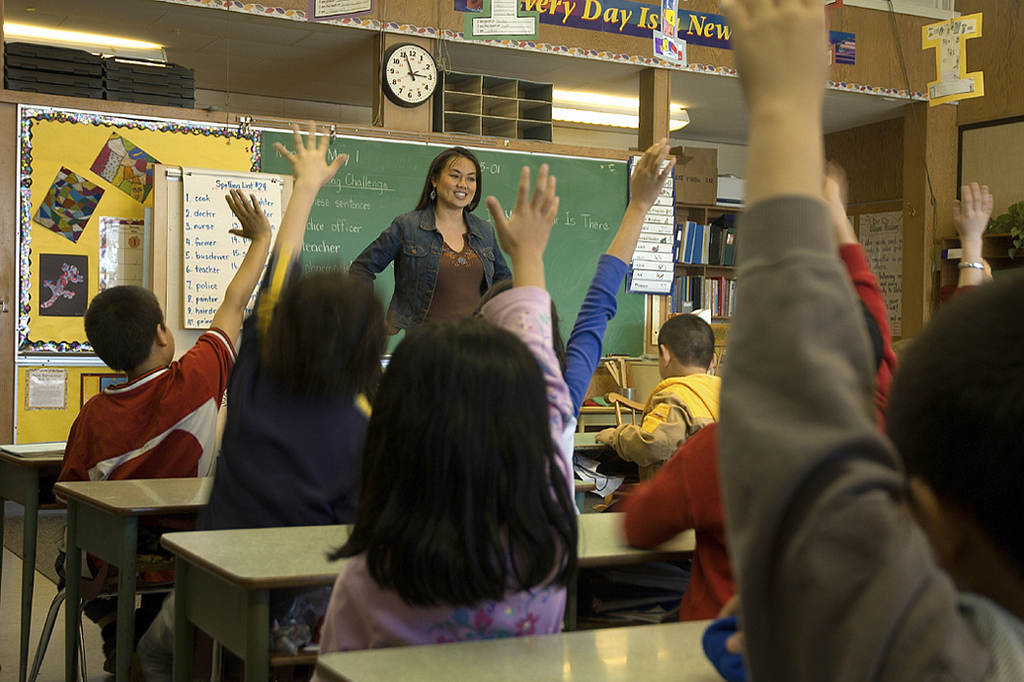 Teacher in the Classroom by audiolucistore (CC BY 2.0)

A recent Gallup poll found that 70% of Americans favor using federal money to expand pre-school programs across the country. There were differences along party lines. Only 53% of Republicans favor the expansion, while 87% of Democrats favor the expansion.
To some extent, this disparity is unsurprising. Fans of small government typically concede that government should tax for the purposes of a minimal police state. We need the police to protect liberty at home. We need the courts to enforce contracts and protect people against fraud. We need the military to protect our liberty from aggressive foreign states. All of this is justified by the libertarian ideal that governments may tax in order to protect liberty and freedom. Taxation encroaches on liberty, but if the tax is to secure greater liberty and freedom, then it is okay for libertarians and conservatives.
Typically, this libertarian ideal is thought to exclude funding for other programs that aren’t for securing liberty such as welfare, health insurance, scientific research, public works, postal service, and public roads. If people really want those things, the free market will find a way to make it so. The libertarian ethos is also typically thought to exclude public funding for public education. It’s this latter thought, that I want to challenge here. I think libertarians, on libertarian grounds, ought to strongly favor public funding for high quality education for all.
A well-educated America would be populated with people who are not as susceptible to fraudulent assaults on their liberty. A well-educated America would be populated with people who could spot attempts to deprive other citizens of liberty. A well-educated America would be populated with people who would creatively address, perhaps even via the private sector, assaults on liberty.
Libertarians think we can permissibly invest in soldiers and police because they are an effective insurance against encroachments on liberty. Why not think of every citizen as a potential defender of liberty? Investing in quality education for every citizen is excellent insurance against fraud and violation of freedom and liberty, which is at the top of the libertarian/conservative list for things a government can tax to provide.
You might argue that our current system of education is broken. It’s a mess, you might say. Funding it is an inefficient means to ensure quality education for all students. However, that’s not an argument for not funding education. At best, it’s an argument for transforming our public education model. If we have planes that aren’t that good, we use them to defend our country while we build better planes. We don’t abolish the Air Force.
You might worry that as we transform citizens into defenders of liberty, we also educate better criminals and better con-artists. However, this is a risk that we take training soldiers and police, and they do sometimes use their skills to violate people’s liberty. But we don’t cut funding for the military and the police simply because we realize that in training potential heroes we also train potential menaces. The solution here is programming that is designed to mitigate the number of potential menaces and the degree to which they can inflict harm.
The bottom line is that education is not just about individuals securing better lives for themselves. If it were, then it would make sense (by libertarian principles) that people should pay for it if they want it. Education is a route to the kind of public good that is central to what a libertarian (typically) thinks we can tax for. It is an effective means to stabilizing our democracy and ensuring that we have vigilant footsoldiers everywhere who will defend precisely the thing that a libertarian thinks the government can pay to defend – our freedom. If you ascribe to libertarian ideals, you should support funding for education.