Will you join the ALS Bucket Brigade? 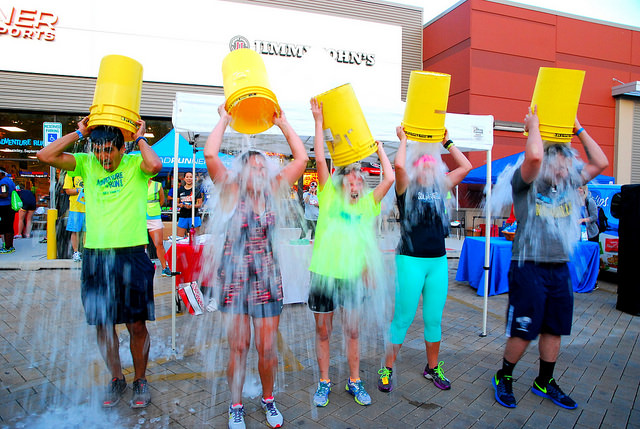 If you have scrolled through any social media newsfeed in the past few months, you’ve probably watched your share of ALS Ice Bucket challenge videos.  Hilarious, but heartfelt, this viral phenomenon raises awareness for ALS (also known as Lou Gehrig’s disease), which is a progressive neurodegenerative disease that affects nerve cells in the brain and spinal cord.  Those who suffer from ALS experience paralysis due to the degenerating connections between nerve cells in their body, and eventually fall victim to this horrible disease.

The recent trend to support ALS by challenging others to an ice-cold bucket bath has, however, used time to its advantage; raising over $94 million for ALS research.  After dousing themselves with the ice-filled bucket of their choosing, challengers reveal their own list of nominees, expecting either a water-soaked posting or a $100 donation to the ALS charity of their choice within the set time limit.  Aside from taking over social media, the ALS Ice Bucket challenge has gained publicity for a few other ethical reasons.

Some of the funds donated to the cause have been used to support Embryonic Stem Cell Research, creating an issue for many Christians who do not believe in using human lives for the sake of medical research.  This causes a moral problem for those who want to support  a good cause but are opposed to supporting a chosen method of research for the disease.  However, this isn’t the only ethical part of this charity challenge.

In her recent Impact Ethics post titled, “The ALS Ice Bucket Challenge: Doing Good, Even If for the Wrong Reason,” Samantha Brennan questions the human motivation and the moral importance of motives in regards to these ALS challenges.  Realizing that it is much easier to share a goofy video raising awareness for ALS than to share videos of people coping with the disease itself, Brennan is left puzzled by the perverse nature of the ALS challenge; a reality where “the huge amount of good that’s resulted seems to trump the moral importance of motives.”

Maybe Christians aren’t the only members of society that should have a problem with the implication of this challenge.  But then again, maybe the money raised for research is worth the slight disregard of morals.

In the end, millions of people are learning through uncountable video challenges that ALS stands for Amyotropic Lateral Sclerosis.  The real question becomes, however, what do you stand for?