Mom, I Need an iPad For School! 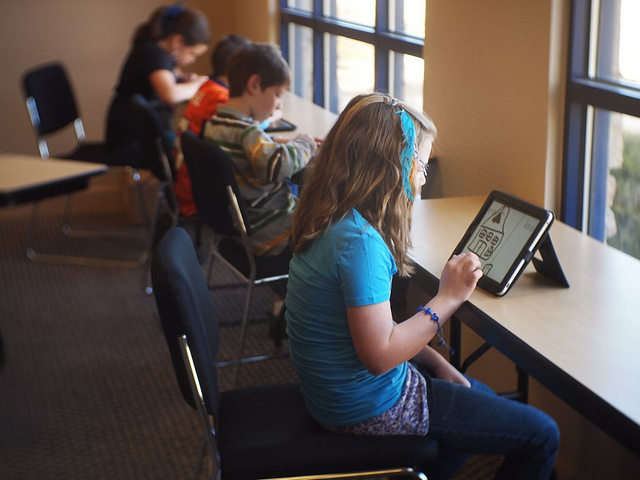 “Student iPad School” by Brad Flickinger (via Flickr – CC BY 2.0)

Many classrooms these days are increasing their daily use of technology by implementing the use of iPads. It has become a national trend in many primary and elementary schools to require every student to purchase an iPad. Environmentally, iPads are great. They save loads of paper, yay! Economically, online books tend to be cheaper than physical hard copies. Socially, they’re trendy, popular and cool. And lastly, iPads are much better with organization than a bunch of worksheets jammed into one folder that get smushed at the bottom of a backpack.

Bottom Line: iPads are easier and more efficient. They’re awesome. It makes sense to begin to take advantage of this technology we have and weave them into our education system. However, before everyone gets all comfy cozy with this fab idea, it is critical to take the time and consider the possible implications of introducing technology into a classroom of such young pupils.

Let’s take the case of the decrease in attention rates. Is there any shock that there has been a spike in the rate of children and adolescents who have attention deficit disorders? Personally, I don’t find it surprising at all. What else would one expect from all the technology we’re exposed to and so reliant on. In his book, The Shallows: What The Internet Is Doing To Our Brains, Nicholas Carr describes the neuroplasticity of our brains and how they have been reshaped by our constant use of technology and our hyper ability to multitask. For example, while you’re checking your email, you receive a text. Check text while you’re replying to email. Ad on the side of screen appears and its a really nice pair of shoes. Oooh those shoes are cute. Online shop while continuing to text and having a multitude of other internet browser tabs up. Our brains have become rewired to work like this. It would be no surprise to me if the iPads in classrooms accelerated this because you would become so exposed to multitasking at such a young age. For example, you’re in class and the teacher is asking you to work on an iAssignment (is that what they will call work sheets?) and a banner notification appears. Its an iChat from your best friend across the room. Hi Cindy.  At this point you’re already multitasking, doing the assignment, and on iChat. You’ve already been distracted, and it has only been 2 minutes since the teacher told you to get the iPad out and begin working. Imagine this occurring every time the iPads are used and think about how this would affect the learning process for young kids.

Scientific American, sheds light on this topic by answering how the technologies we use to read (iPads, Kindles, etc) change the way we read. Similar to Nicholas Carr’s findings, Scientific American, provides evidence to suggest that reading e-books have a negative impact on comprehension and retention. After reading something electronically, psychologists ran tests that distinguished the ability to recall bits of information and actual retained knowledge from the piece read. The results of this study were consistent with the beliefs of Nicholas Carr and the Scientific American article.  The leading psychologist of the study, Kate Garland concluded, “the students who read on paper learned the study material more thoroughly more quickly; they did not have to spend a lot of time searching their minds for information from the text, trying to trigger the right memory—they often just knew the answers”.

While technology does help education in some ways, it is very important to be aware of the possible consequences and implications that also come with these technologies. It is especially critical to be weary of how these technologies, like having iPads in classrooms, might hinder the learning development of young children. Is it ethical to be putting children in positions that might compromise their ability to learn? Let us know what you think in the comments below!