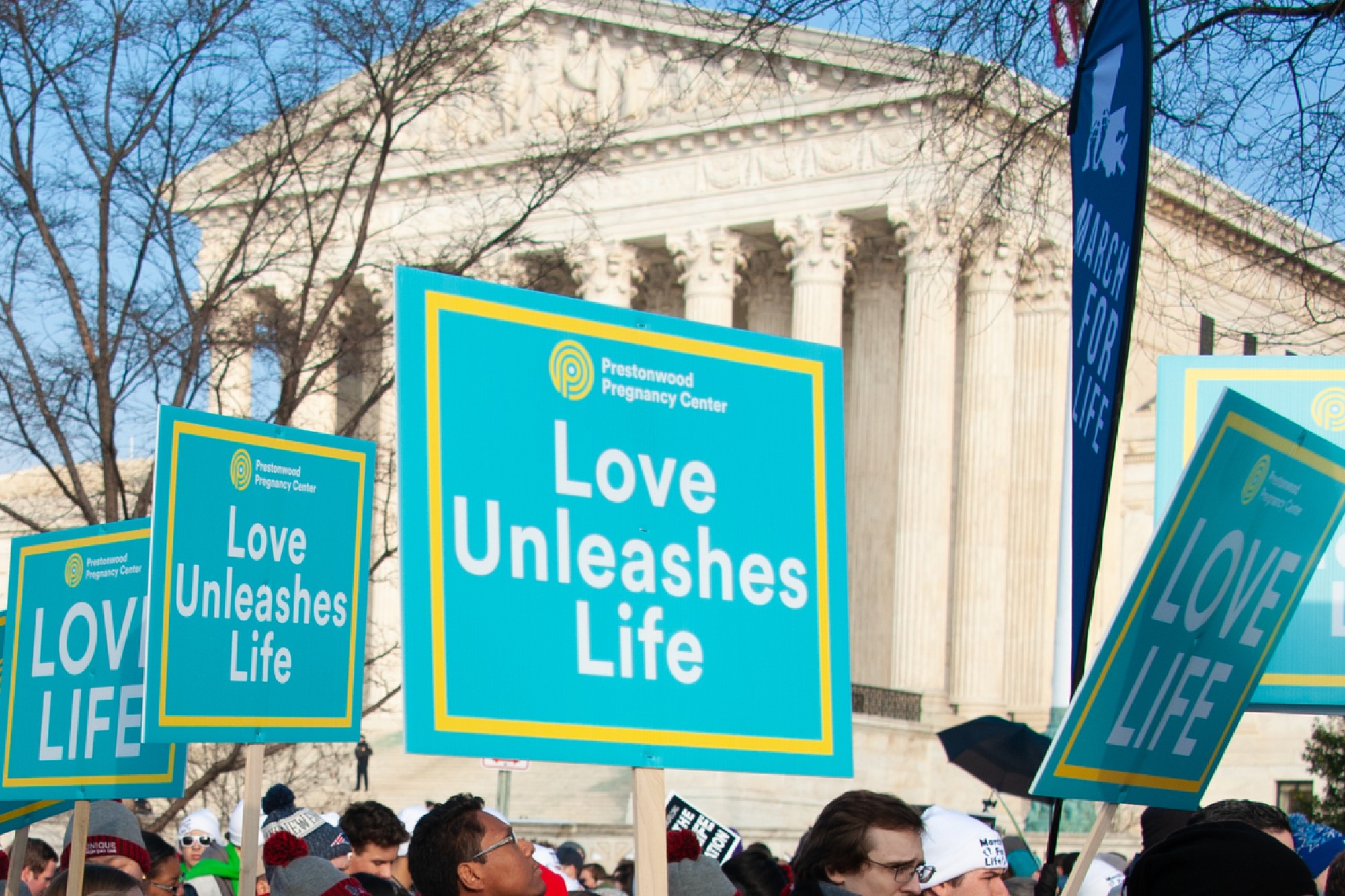 With the Supreme Court’s ruling in Dobbs v. Women’s Health, debates about the regulation of abortion will likely become an even more contentious issue in the coming days – a sentence which would have seemed absurd even just a few years ago. State legislatures may now attempt to outright ban abortion, which would likely lead to highly publicized, intense debate on the issue.

My purpose in this and the subsequent article is not to advance a view on abortion or the regulatory limits the state ought to place on it. Instead, my goal is to consider some concepts central to the abortion debate and demonstrate that they are used sloppily in public debates about abortion.

The hope is that, by illuminating these concepts, we may perhaps gain some clarity into why it feels like this debate has made little to no progress in the nearly 50 years since Roe v. Wade.

Indeed, polling suggests that for nearly thirty years a slight majority of Americans have consistently felt abortion ought to be legal in most cases, while those who think abortion ought to usually be illegal make up somewhere in the high thirties to low forties of participants polled.

Before beginning, it may be worthwhile to put my biases on the table. I think that a right to access abortion is implied by a general right to bodily autonomy. However, I am not a legal scholar and cannot discuss in depth what legal rights substantive due process guarantees, or whether we even ought to adopt that standard.

Nonetheless, I find the reasoning in the majority’s opinion deeply troubling. The opinion, authored by Justice Samuel Alito, argues that abortion rights are not explicitly guaranteed by the Constitution. Further, the majority state that a right to abortion it is not “deeply rooted in this Nation’s history and tradition” as the procedure was illegal in most states until the “late 20th century.” However, plenty of other things seem obviously inappropriate for the state to regulate yet fail to pass these criteria; a right to marriage is not named in the Constitution, and interracial marriage was illegal in most states until the mid-20th century, with 16 hold-out states until Loving v. Virginia, a case decided just six years before Roe. Although it is worth noting that the majority opinion attempts to differentiate abortion from other purported rights grounded in the right to privacy, like interracial marriage, same-sex marriage, and access to contraception. (I will discuss more on this point later.)

Generally speaking, the position of anti-abortion advocates gets its support from a very simple argument:

Line 1, while very intuitive, quickly runs into issues. Namely, not all killings are obviously wrong. For instance, most people see no moral problem with killing an animal to eat it, or exterminating unwanted pests in the home.

So, one might specify line 1 by changing it to 1’) Killing a human is wrong. However, even this may still be questioned. 1’ puts significant pressure on the second premise. A zygote is human in the sense that it has human DNA. But as a bundle of cells, it is no more human than, say, a tumor. Embryos and fetuses begin to resemble humans in their physical shape. So perhaps they might meet the criteria for being human, while a zygote does not.

But being a living being that looks human or has human DNA does not seem to grant “moral status” – having standing such that your interests are given equal moral importance to the interests of others.

Being human seems neither necessary, nor sufficient. Science fiction and fantasy are littered with non-humans who seem to deserve the same moral status as humans; some fans felt aggrieved that Chewbacca did not get a medal at the end of the first Star Wars film.

Further, imagine a hospital in a triage situation. Suppose that a new patient arrives who needs immediate care. Call her patient K. If patient K receives the care she needs, she will make a complete recovery. If not, she will quickly die. However, the only way to free up the resources necessary to treat patient K is to cease treating a different patient. Call her patient M. Patient M has suffered total frontal brain death. Although patient M’s body still performs vital functions like maintaining breath and heartbeat, there is no chance that she will ever regain consciousness or perform higher cognitive functions again.

Should the doctors halt patient M’s treatment to save patient K’s life? Most would think yes.

This example in particular suggests that having full moral status requires more than being a living human being. Namely, it requires having certain psychological capacities – things like the ability to form a self-concept, to think rationally and to develop a plan for your life. This is why beings like Chewbacca deserve the same consideration that we do, despite the fact that they lack human DNA.

While zygotes, embryos, and fetuses are human in the sense that they are members of the human species, they seem to lack these psychological capacities. Thus, they lack what is required for what some call personhood in the moral sense, or moral personhood. Thus, even if their interests deserve some moral consideration, they may not deserve as much consideration as those of a clear moral person – in particular, a pregnant person.

However, it should be noted that some may ground full moral status in things other than possession of certain psychological capacities. For instance, some religiously motivated anti-abortion advocates may claim that a human has full moral status from the moment of conception onward due to the possession of something like a soul. Of course, unless their interlocutors share the belief in a soul, this move may simply bring the discussion to a halt.

So, some anti-abortion advocates might change their rhetoric. They could instead claim that zygotes, embryos, and fetuses have elevated status because of their potential, rather than their current capacities. In criticizing the dissenting opinion, Justice Alito notes that the dissenters do not acknowledge “the States’ interests in protecting fetal life.” Elaborating further on this, he briefly states that comparing the decision in Dobbs to decisions in Griswold, Eisenstadt, Lawrence, and Obergefell relies on a false analogy – abortion “destroys a potential life” but contraception, sodomy, and same-sex marriage do not, claim the majority. (Although it is worth noting that Justice Clarence Thomas, in his concurrence, writes that the court should reconsider its due process precedents, specifically naming Griswold, Lawrence, and Obergefell.)

But this idea of a potential life is quite vague. Eggs in a bird’s nest are potential lives. Unless these are eggs of an endangered species, the state does not seem to have an interest in regulating our conduct towards them. So surely the majority means potential persons – the idea here being that because personhood is of moral significance, then having the potential to be a person must also be morally significant.

However, “potential person” is still too vague. Taken on its face, everything from a fertilized egg onward is a potential person. But it need not stop here. All it takes to begin a process that will eventually result in a person is to have a single sperm cell and a single egg cell. So, these two cells may be potential persons. This would lead to some absurd consequences – if the state has an interest in protecting potential persons, then they would have an interest in banning products like contraceptives or procedures like vasectomies. But surely, at least for now, this is not what the Court suggests.

A single sperm and egg cell are potential persons in the sense that they may produce a person; they’re the necessary “raw ingredients” to start a process that eventually can result in a person. However, they themselves do not become a person. Instead, they produce other entities that become a person.

But the exact nature of this identity preserving unifying structure is an open question. Some might argue that identity is a matter of being the same living organism. Others claim that it is a matter of spatio-temporal continuity; that if we could plot your location over the course of time, the result would be an unbroken 4th dimensional “space-time-worm” where each “slice” is your location at a moment in time. I’ve noted elsewhere that psychological factors play a role in our identity.

Thus, there are multiple candidate answers to the question of what has the power to become a person. If our identity consists in being a human organism, then the power to become a person emerges at the point when the embryo becomes a fetus – after the cells have differentiated, taken on functions, and the overall structure of the organism is set into place. If we are instead space-time-worms, then our identity stabilizes as early as fertilization. But if our identity is a matter of psychology, then we may not develop the power to become persons until much later, perhaps not even until after birth when our experiences start shaping our future attitudes and behaviors.

As a result, the sense in which we call something a “potential life” has great bearing on what policies we should favor. If we mean those things which have the power to produce a person, then what behaviors the state has an interest in regulating would be very far reaching – any time that we are not reproducing as much as possible, we are destroying or at least preventing a potential life. But if we instead mean that a potential life exists only when something has the power to become a person, then we are stuck having to answer the question of what preserves our identity over time before we can answer any questions about whether a fetus has the potential to become a person.

What kind of justifications should we be allowed to give?
Laura Siscoe
|