Nationwide Prohibition: The Next Step for the Anti-Abortion Movement? 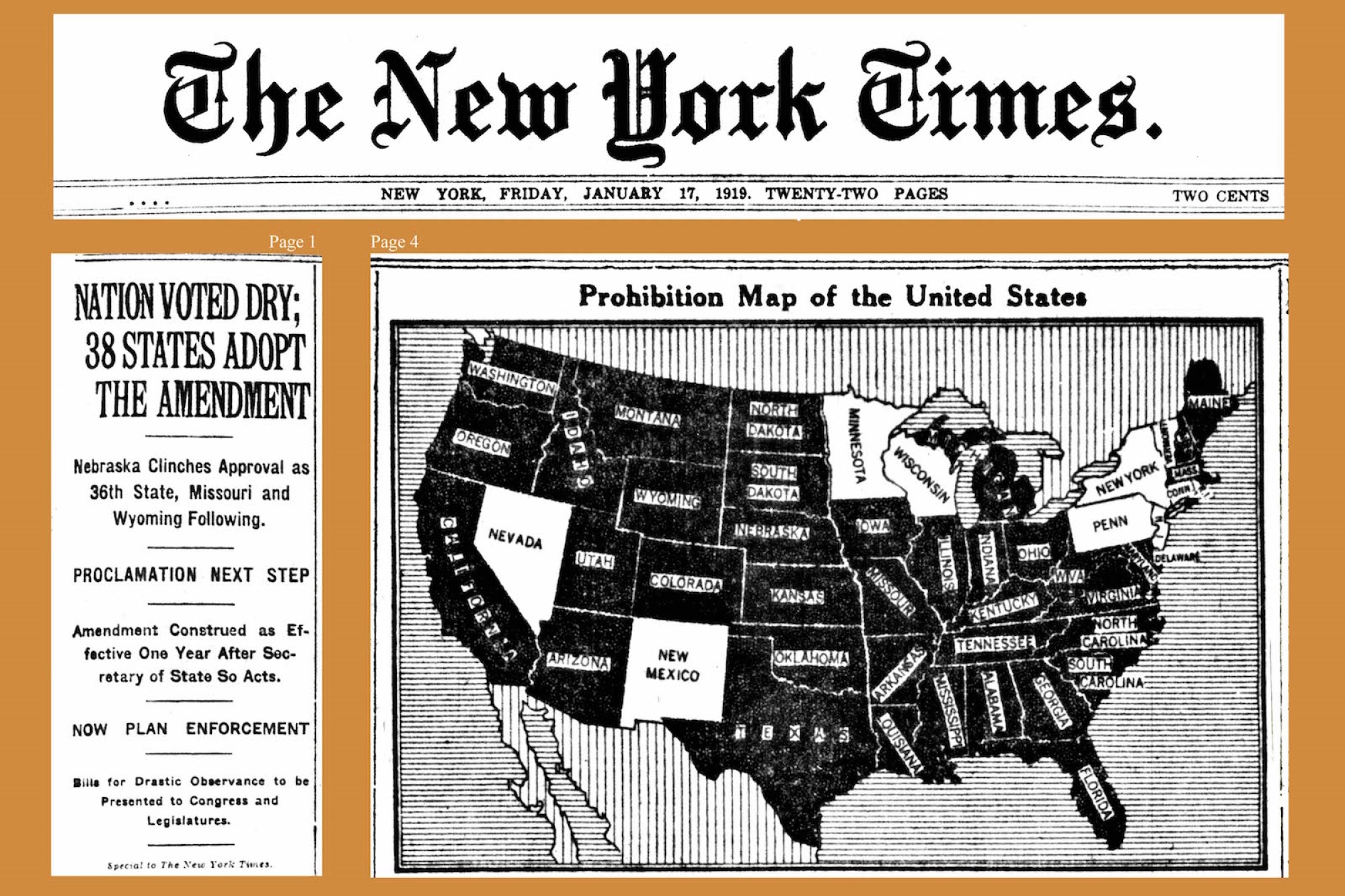 In 1919, on the eve of the passage of the Eighteenth Amendment prohibiting the manufacture and sale of alcohol, twenty-three states had already voted themselves “dry.” Yet for the temperance movement, the piecemeal, state-by-state approach to prohibition was never more than a tactical gambit; the ultimate goal was always national in scope. In the wake of the U.S. Supreme Court’s decision to revoke its recognition of a constitutional abortion right, twenty-six states are likely to severely restrict or outright ban abortion.

But as with the temperance movement, there is every reason to think that the anti-abortion movement will not rest content with the devolution of abortion policy to the states

— at least, not insofar as devolution would allow the decriminalization, legalization, or even constitutional protection of abortion in many states. Indeed, The Washington Post recently reported that anti-abortion activists and Republican legislators have started mobilizing around federal legislation to outlaw abortion after six weeks of pregnancy, and in late June, Mike Pence called on anti-abortion activists to work to ensure that “the sanctity of life is restored to the center of American law in every state in the land.” In this column, I will explain why and how the anti-abortion movement, with help from the GOP, may seek to install a nationwide abortion policy.

Within the context of our constitutional order, the moral logic of the anti-abortion movement militates strongly against allowing the “people of the various States” to “evaluate [the interests of a woman who wants an abortion and the state’s interest in ‘potential life’] differently,” as the majority opinion in Dobbs put it. The anti-abortion movement believes that abortion violates a basic right to life. With respect to fundamental individual rights, our Constitution tends to favor not allowing a majority vote in each state to determine whether or not these rights will be respected in that state — though states may decide to protect these rights more robustly than the federal “floor” requires. Thus, the rights-talk employed by the anti-abortion movement strongly suggests that abortion policy should be national.

On a more pragmatic note, the availability of abortion pills and abortion clinics in neighboring states may undermine the efforts of states hostile to abortion to restrict their citizens’ access to the procedure.

For example, some studies suggest that once Texas banned abortion after around six weeks of pregnancy, abortions among Texas women did not decline as sharply as previously thought because many traveled to clinics in nearby states or ordered abortion pills online. Even with twenty-six states banning abortion, there is no going back to the pre-Roe days — and anti-abortion activists know it.

Thus, a national abortion policy is more consistent with anti-abortion ideology and could overcome the practical limitations of a twenty-six state ban. There are four main avenues for instituting such a policy.

THE SECOND OPTION is to pass an anti-abortion bill in the U.S. Congress. Because Congress can act only under the authority of one of its enumerated powers, it would have to select an appropriate constitutional “hook” that plausibly empowers it to make law respecting abortion. Two possible powers are the Commerce Clause — abortion is a service sold in interstate commerce — and Section Five of the Fourteenth Amendment, which gives Congress the power to enforce Section One of that amendment through appropriate legislation. Ironically, the latter approach would require Congress to stake out the position that the fetal right to life is a fundamental right protected by Section One’s Due Process Clause — the sort of right that the right to abortion was but is no longer following Dobbs. A major advantage of the general congressional approach is that all it requires is a majority vote in the House and sixty Senate votes. That seems like a much easier lift than the other political options discussed in this column. On the other hand, the relative impermanence of this solution may worry some activists: any congressional act is, of course, potentially subject to repeal. Furthermore, the political wrangling necessary to pass a bill may ultimately issue in a watered-down policy.

THE THIRD OPTION is to try to obtain recognition of the fetal right to life as a constitutionally-protected right through the courts. The major problem with this approach is not that the U.S. Supreme Court is unlikely to recognize a fetal right to life as one of the unenumerated rights protected by the Fourteenth Amendment’s Due Process Clause. Based on the majority opinion’s reading of the common law and nineteenth-century state statutes in Dobbs, the conservative justices may welcome such an argument.

Instead, the problem is that recognition of this right probably would not empower the Court to require states to make abortion illegal, or empower Congress to pass legislation requiring the same.

The reason is the so-called “state action” doctrine: the fairly well-established principle that the Fourteenth Amendment protects against state-caused harms, not harms caused by private actors. If the Supreme Court were to recognize a fetal right to life, it could on that basis prevent state institutions from performing abortions, and perhaps even private institutions that receive state or federal funding. But it could not prevent a private clinic from performing abortions.

Ironically, it has always been the more liberal justices who have played fast and loose with the state action doctrine; in United States v. Guest (1966), for example, a majority of the Warren Court concluded that the Fourteenth Amendment empowers Congress to outlaw purely private discrimination in some circumstances. In United States v. Morrison (2000), five conservative justices — including Justice Thomas — disavowed Guest in ruling that Congress did not have the power under the Fourteenth Amendment to enact the Violence Against Women Act, which allowed victims of gender-motivated violence to sue perpetrators in federal court. Such violence by private actors, the Court held, did not fall within the purview of the Fourteenth Amendment’s grant of congressional power. Could today’s conservative Court revive Guest in order to affirmatively require states to prevent private actors from violating fetus’ rights to life? Perhaps the Court will suddenly find itself less impressed with the moral distinction between act and omission, or between the state doing harm rather than allowing harm to occur.

THE FINAL OPTION is to pursue a constitutional amendment enshrining the fetal right to life. The major disadvantage of this approach is political: any constitutional amendment must garner a two-thirds majority vote in the House and Senate, plus ratification by at least thirty-eight states. Even if all twenty-nine states that have demonstrated “hostility” to abortion rights were to ratify such an amendment, that would still be nine states short. But to paraphrase Harold Macmillan, the essence of politics is events; it is not outside the realm of possibility that events could change the political complexion of nine states in a more anti-abortion direction. A major advantage of this approach is that no pre-existing limitation on Congress’s power, such as the state action doctrine, can constrain the reach of a new amendment. In addition, once a constitutional amendment is passed, it can only be repealed by another amendment. Only one amendment — the Eighteenth — has ever been repealed.

Although it seems highly likely that the anti-abortion movement will pursue at least one of these options, advocates might do well to consider the fate of the temperance movement after national prohibition was passed. Where once temperance, true to its name, had denoted to the public mind something like moderation in alcohol consumption, with the nationwide coercive imposition of prohibition it came to be associated with fanaticism and even bigotry. After the Eighteenth Amendment was repealed in 1933, the temperance movement disappeared from the political scene, likely never to return. For better or worse, Americans are, most of them, moderates; they recoil from moral extremism. Moreover, a majority say that abortion should be legal at least in the first trimester. Thus, in seeking a hardline national policy, the anti-abortion movement may very well overplay its hand.