‘Don’t Look Up’ and “Trust the Science” 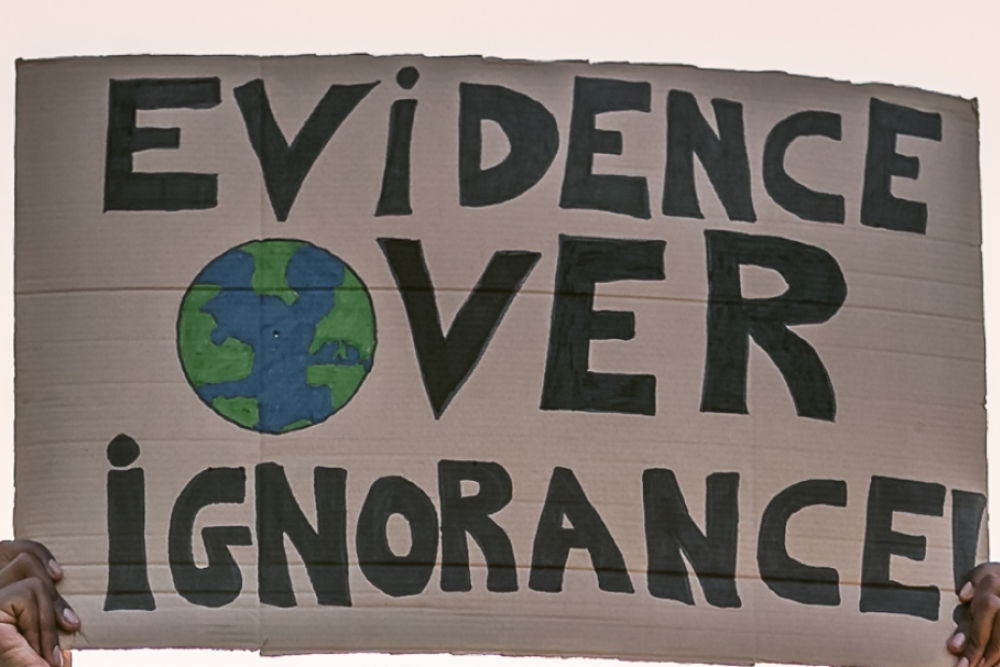 A fairly typical review of “Don’t Look Up” reads as follows: “The true power of this film, though, is in its ferocious, unrelenting lampooning of science deniers.” I disagree. This film exposes the unfortunate limits of the oft-repeated imperative of the coronavirus and climate-change era: “Trust the Science.” McKay and Co. probe a kind of epistemic dysfunction, one that underlies many of our most fiercest moral and political disagreements. Contrary to how it’s been received, the film speaks to the lack of a generally agreed-upon method for arriving at our beliefs about how the world is and who we should trust.

As the film opens, we are treated to a warm introduction to our two astronomers and shown a montage of the scientific and mathematical processes they use to arrive at their horrific conclusion that a deadly comet will collide with Earth in six months. Surely, you might be thinking, this film tells us exactly whom to believe and trust from the outset! It tells us to “Trust the Scientists,” to “Trust the Science!”

Here’s a preliminary problem with trying to follow that advice. It’s not like we’re all doing scientific experiments ourselves whenever we accept scientific facts. Practically, we have to rely on the testimony of others to tell us what the science says — so who do we believe? Which scientists and which science?

In the film, this decision is straightforward for us. In fact, we’re not given much of a choice. But in real life, things are harder. Brilliantly, the complexity of real-life is (perhaps unintentionally) reflected in the film itself.

Imagine you’re a sensible person, a Science-Truster. You go to the CDC to get your coronavirus data, to the IPCC to get your climate change facts. If you’re worried about a comet smashing into Earth, you might think to yourself something like, “I’m going to go straight to the organization whose job it is to look at the scientific evidence, study it, and come to conclusions; I’ll trust what NASA says. The head of NASA certainly sounds like a reliable, expert source in such a scenario.” What does the head of NASA tell the public in “Don’t Look Up”? She reports that the comet is nothing to worry about.

Admittedly, McKay provides us a clear reason for the audience to ignore the head of NASA’s scientific misleading testimony about the comet. She is revealed to be a political hire and an anesthesiologist rather than an astronomer. “Trust the Science” has a friend, “Trust the Experts,” and the head of NASA doesn’t qualify as an expert on this topic. So far, so good, for the interpretation of the film as endorsing “Trust the Science” as an epistemic doctrine. It’s clear why so many critics misinterpret the film this way.

But, while it’s easy enough to miss amid the increasingly frantic plot, the plausibility of Trust the Science falls apart as the film progresses. Several Nobel-prize winning, Ivy-league scientists throw their support behind the (doomsday-causing) plan of a tech-billionaire to bring the wealth of the comet safely to Earth in manageable chunks. They assure the public that the plan is safe. Even one of our two scientific heroes repeats the false but reassuring line on a talk show, to the hosts’ delight.

Instead of being a member of the audience with privileged information about whom you should trust, imagine being an average Joe in the film’s world at this point. All you could possibly know is that some well-respected scientists claim we need to destroy or divert the comet at all costs. Meanwhile, other scientists, equally if not more well-respected, claim we can safely bring the mineral-rich comet to Earth in small chunks. What does “Trust the Science” advise “Don’t Look Up” average Joe? Nothing. The advice simply can’t be followed. It offers no guidance on what to believe or whom to listen to.

How could you decide what to believe in such a scenario? Assuming you, like most of us, lack the expertise to adjudicate the topic on the scientific merits, you might start investigating the incentives of the scientists on both sides of the debate. You might study who is getting paid by whom, who stands to gain from saying what. And this might even lead you to the truth — that the pro-comet-impact scientists are bought and paid for by the tech-billionaire and are incentivized to ignore, or at least minimize, the risk of mission failure. But this approach to belief-formation certainly doesn’t sound like Trusting the Science anymore. It sounds closer to conspiracy theorizing.

Speaking of conspiracy theories, in a particularly fascinating scene, rioters confront one of our two astronomers with the conspiracy theory that the elites have built bunkers because the they don’t really believe the comet is going to be survivable (at least, not without a bunker). Our astronomer dismissively tells the mob this theory is false, that the elites are “not that competent.” This retort nicely captures the standard rationalistic, scientific response to conspiracy theories; everything can be explained by incompetence, so there’s no need to invoke conspiracy. But, as another reviewer has noticed, later on in the film “we learn that Tech CEO literally built a 2,000 person starship in less than six months so he and the other elites could escape.” It turns out the conspiracy theory was actually more or less correct, if not in the exact details. This rationalistic, scientific debunking and dismissal of conspiracy is actually proven entirely wrong. We would have done better trusting the conspiracy theorist than trusting the scientist.

Ultimately, the demand that we “Trust the Science” turns out to be both un-followable (as soon as scientific consensus breaks down, since we don’t know which science or scientists to listen to), and unreliable (as shown when the conspiracy theorist turns out to be correct). The message this film actually delivers about “Trust the Science” is this: it’s not good enough!

The Moral and Political Importance of “Trust the Science”

Let’s now look at why any of this matters, morally speaking.

Cultures have epistemologies. They have established ways for their members to form beliefs that are widely accepted as the right ways within those cultures. That might mean that people generally accept, for example, a holy text as the ultimate source of authority about what to believe. But in our own society, currently, we lack this. We don’t have a dominant, shared authority or a commonly accepted way to get the right beliefs. We don’t have a universally respected holy book to appeal to, not even a Walter Cronkite telling us “That’s the way it is.” We can’t seem to agree on what to believe or whom to listen to, or even what kinds of claims have weight. Enter “Trust the Science”: a candidate heuristic that just might be acceptable to members of a technologically developed, scientifically advanced, and (largely) secularized society like ours. If our society could collectively agree that, in cases of controversy, everyone should Trust the Science, we might expect the emergence of more of a consensus on the basic facts. And that consensus, in turn, may resolve many of our moral and political disagreements.

This final hope isn’t a crazy one. Many of our moral and political disagreements are based on disagreements about beliefs about the basic facts. Why do Democrats tend to agree with mandatory masks, vaccines, and other coronavirus-related restrictions, while Republicans tend to disagree with them? Much of it is probably explained by the fact that, as a survey of 35,000 Americans found, “Republicans consistently underestimate risks [of coronavirus], while Democrats consistently overestimate them.” In other words, the fact that both sides have false beliefs partly explains their moral and political disagreements. Clearly, none of us are doing well at figuring out whom we can trust to give truthful, undistorted information on our own. But perhaps, if we all just followed the  “Trust the Science” heuristic, then we would reach enough agreement about the basic facts to make some progress on these moral and political questions.

Perhaps unintentionally, “Don’t Look Up” presents a powerful case against this hopeful, utopian answer to the deep divisions in our society. Trusting the Science can’t play the unifying role we might want it to; it can’t form the basis of a new, generally agreed upon secular epistemic heuristic for our society. “Don’t Look Up” is not the simple “pro-science,” “anti-science-denier” film many have taken it to be. It’s far more complicated, ambivalent, and interesting.