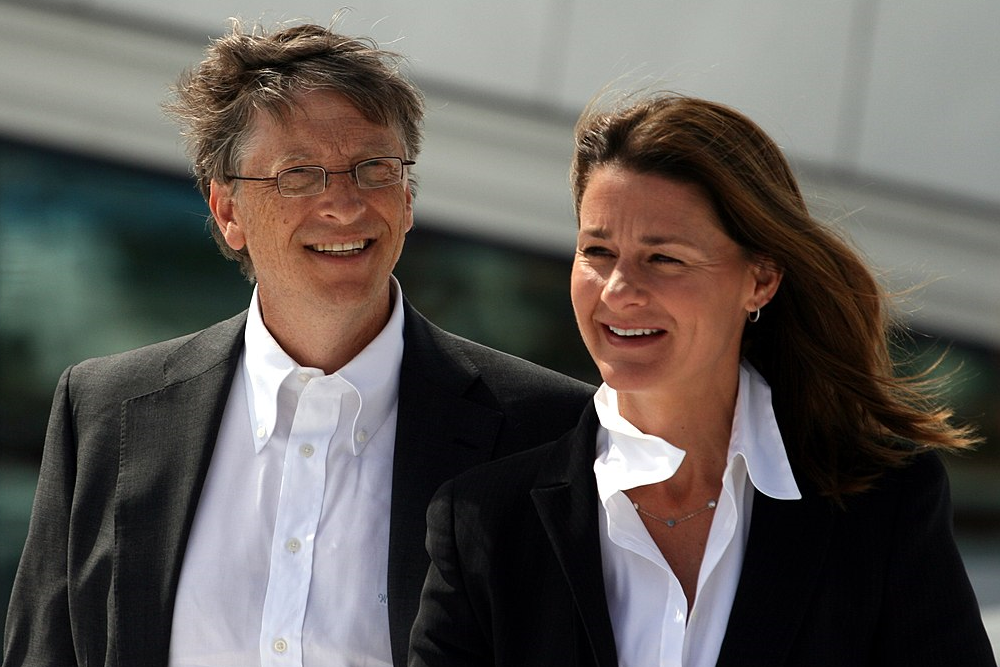 “Melinda, and her husband, Bill” by Kjetil Ree is licensed under CC BY-SA 3.0 (via Wikipedia)

On May 3rd, Bill and Melinda Gates announced their decision to divorce. The announcement sent shockwaves through the business community as well as the philanthropic world, and surprised many members of the general public. Since the announcement, little by little, media outlets from The Wall Street Journal to The Daily Mail have been publishing news stories speculating on the reason for divorce, and also providing very personal aspects of the Gates’ married life. This coverage raises important questions about the role of the media in reporting on the private lives of the rich and famous and the role of individuals in consuming this private information.

Where should we draw the line when it comes to media coverage of relationships and dating? Is it moral to seek out such intimate information about a stranger’s life?

Coverage of high-profile relationships is by no means new. For decades tabloids and mainstream news have covered the intimate details of the personal relationships of public servants to Hollywood socialites. While many celebrities make their living primarily from remaining relevant in the public eye, a whole host of other professionals, like athletes, politicians, and philanthropists have also received their fair share of scrutiny. In 2009, news of Tiger Woods’ litany of affairs dominated the news cycle for weeks. In 2019, during Jeff and McKenzie Bezos’ divorce, details of his consistent public infidelity came to light. Would we know, or care to know, any of these details about our coworkers, acquaintances, or even strangers?

Many of us accept media scrutiny of the rich and famous but would be appalled if a local news channel or paper ran a story on the affairs of everyday people. Though there are designated celebrity news platforms which specialize in tabloid gossip, even conventional news sources partake in running stories which reveal embarrassing and personal details of public figures. Clearly, these stories get more clicks than criticism, but that does not necessarily make such stories ethical.

The field of celebrity gossip carries its own set of ethics. These include seeking permission by subjects whenever possible, avoiding content which could harm a celebrity’s reputation, and maintaining credible sources of information. In the case of Bill and Melinda Gates, several pieces of information released by the press arguably both invade their privacy and damage their reputation. For example, the media recently reported on the details of Bill Gates’ annual trips to visit his ex-girlfriend for a weekend, a condition reportedly negotiated during the Gates’ marriage arrangements. As this arrangement appears to be consensual, private, and holds a high potential for damaging the Gates’ reputation there does not appear to be an ethical reason to report on it if not given permission to do so. Other details of the decision to divorce are more ethically fuzzy, such as Bill Gates’ association with Jeffrey Epstein serving as a motivating factor for the divorce. While this information is private, there is also an interest in the public knowing who was closely associated with a convicted child predator. As more information comes out about the Gates’ divorce, it is important to analyze information reported through the critical lens of journalistic ethics.

Should individuals seek out news concerning the personal lives and relationships of celebrities? Whether or not we believe that the media should cover such stories depends on what value derives from access to this information. While it makes sense to publicize clearly immoral actions of public figures, from violent behavior to fraud and deception, why should we make public the relatively amoral details of their personal affairs? Perhaps we seek out this knowledge because we believe that those we idolize, buy products from, or even vote for, should be “good people.” To some, a string of affairs might communicate a lack of trustworthiness, and a divorce could communicate a lack of perseverance. If we demand these qualities in our business or political leaders it makes sense that we would want to know these details in their personal lives. However, is setting such moral standards reasonable considering the fact that about 1 in 5 Americans engage in infidelity at some point in their lives and roughly 40% of marriages end in divorce? Knowing the sordid details of Bill Gates’ divorce will likely not impact the way that people interact with Microsoft, or even the Bill and Melinda Gates Foundation. It might, however, affect the level of space Gates is given in influencing public discourse. This function of accessing celebrities’ personal information is based on the utility it brings to exercising our own relationships with these celebrities. Perhaps this is similar to how we might judge a coworker or friend: if we found out they behaved in a way contrary to our values, we might limit the degree to which we trust or revere celebrities who do similar things.

Another reason we might seek out this information is not to make judgments, but to revel in the rich and famous’ inability to fulfill happiness despite their massive privilege. Knowing that even Bill Gates is not immune from divorce shatters the image that immense wealth automatically creates the perfect life. Those who do not enjoy such privilege yet have happy marriages might feel satisfaction knowing that they have something that Gates does not. Alternatively, realizing that even those who wield the most power in society might still have imperfect personal lives might change one’s priorities or path to seeking long-term happiness. This function of celebrity gossip might be considered immoral if one believes that we should not use others simply as a source of entertainment, pleasure, or wisdom – especially without their permission.

Finally, answering these questions requires grappling with celebrity privacy, and how much we believe their choosing the spotlight justifies having the painful details of one’s most difficult moments on full display. While fame comes with higher scrutiny, perhaps we should reconsider where we think the lines should be drawn. Perhaps those who choose to use the media to amass wealth and followers should expect no less attention  when it comes to difficult or painful topics. However, perhaps we might believe that no one deserves such details on display, regardless of their position in the public eye. Tabloids have notoriously caused acute mental distress to celebrities and profited off of humiliating personal experiences while doing so. While many might enjoy reading entertainment news, they might not be comfortable with the range of methods taken to obtain this information.

Privacy is something nearly everyone values in their personal lives, especially concerning the most intimate details of close relationships. Perhaps we should ask ourselves whether we would be comfortable with our relationship drama splashed across the front page before clicking on the next celebrity divorce story.