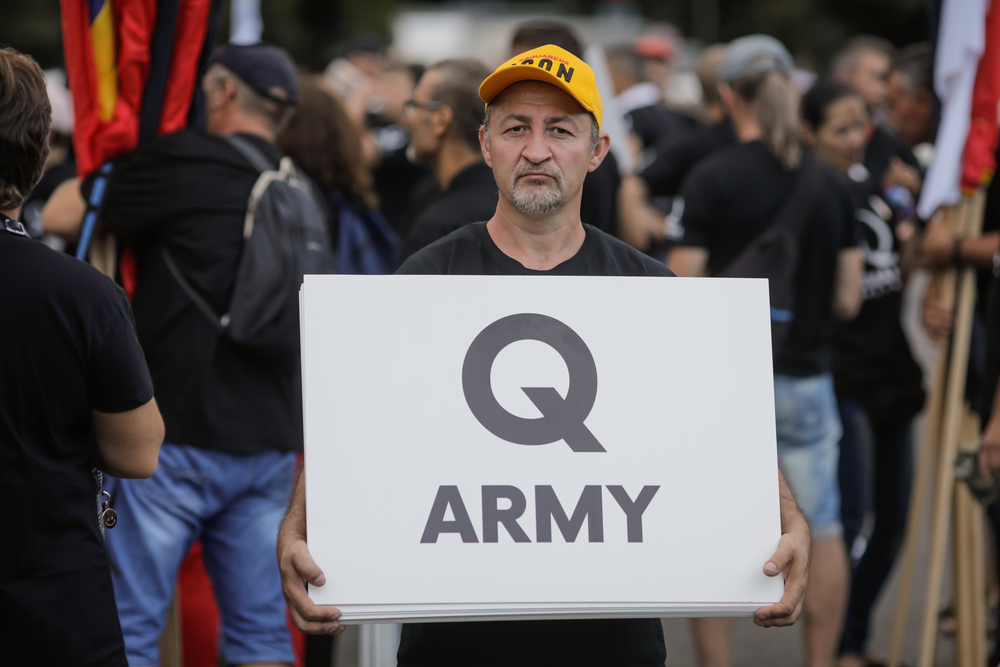 In recent years, threats posed to and by free speech on the internet have grown larger and more concerning. Such problems as authoritarian regimes smothering dissent and misinformation campaigns targeting elections and public health have enjoyed quite a share of the limelight. Social media platforms have sought (and struggled) to address such challenges. Recently, a new insidious threat posed by free speech has emerged: far-right conspiracy theories. The insurrection of January 6th unveiled the danger of speech promoting such beliefs, namely ones the QAnon theory embraces. The insurrection demonstrated that speech promoting the anti-government extremist theory can not only engender violence but existentially threaten the United States. Such speech so threatens harm by manipulating individuals into believing in the necessity of violence to combat the schemes of a secretive, satanic elite. In the days following the insurrection, social media platforms rushed to combat this threat. Twitter alone removed more than 70,000 QAnon-focused accounts from its platform.

This bold but wise move was met with resistance, however. Right-wing media commentators were quick to decry this and similar policies as totalitarian censorship. Legal experts retorted that, as private entities, social media companies can restrict speech on their platform as they please. This is because the First Amendment to the U.S. Constitution protects citizens from legal restrictions on free speech, not the rules of private organizations. Such legal experts may be perfectly correct, and unequivocally siding with them might seem to offer a temptingly quick way to dismiss fanatic right-wing commentators. Nevertheless, caring only about government restrictions on speech seems perilous: such a stance neglects the great importance of social restrictions on speech.

The weight of social restrictions on speech (and behavior, more generally) is very real. Jean-Jacques Rousseau referred to such social restrictions as moral laws. He even seemed to regard this class of laws as more fundamental than the constitutional, civil, and criminal classes. Moral laws are inscribed in the very “hearts of the citizens” and include “morals, customs, and especially opinion.” Violations of these laws are typically penalized with either criticism or ostracism (or both). The emergence of “cancel culture” provides conspicuous examples (for better or worse) of this structure in action, from Gina Carano to John Schnatter. First, an individual (typically, a public figure) violates a moral law (frequently, customary prohibitions on racist speech). Then, the individual receives a punishment (often, in the form of damage to reputation and career). The prohibitions on QAnon-focused Twitter accounts are a form of ostracism: those promoting QAnon beliefs have been expelled from the Twitter community for transgressing moral laws, namely peace (by promoting violence) and honesty (by promoting misinformation). As Twitter has become an integral forum for political discourse (politicians, like former President Trump, heavily rely on the platform to both court popular support and bash their rivals), this Twitter expulsion amounts to marginalization within, or partial expulsion from, general public discourse. Upon considering this, the real restrictiveness of such prohibitions on speech should now be evident.

Once the real strength of social restrictions on speech is acknowledged, a certain tension becomes apparent: that between our liberties concerning speech and our liberties in regard to property. To elaborate, there appears to be a tension between Twitter users and Twitter shareholders (particularly, the right to set and enforce private restrictions on the speech shared over the platform they own). Efforts to balance the two can perhaps be aided by the wisdom of two great Johns: John Locke and Jean-Jacques Rousseau. Their writings offer some thought-provoking perspectives on the grounds and scope of each of the parties’ freedoms.

John Locke believed that rights are derived from nature. He thought they were contained in what he called the Law of Nature: “no one ought to harm another in [their] Life, Health, Liberty, or Possessions.” Certainly, this general rule implies the rights to free speech and property. Moreover, it follows that those particular rights extend only so far as they accord with that rule. Locke’s theory can thus affirm both natural rights and natural limits to them. Stated in Lockean terms, then, the now-removed QAnon accounts apparently promoted speech which transgressed natural limits on the right to free speech (by promoting violence).

Unlike Locke, Jean-Jacques Rousseau held that rights are derived from social agreement, not nature. He held that this social agreement takes the form of continuous negotiation by all members of the “body politic:” manifold “individual wills” are boiled into an all-binding “general will.” In this perspective, the rights to free speech and property extend only so far as social agreement allows. Rousseau’s theory can thus recognize the value of including diverse individuals in social discourse while also recognizing the validity of socially-established regulations on that discourse. Understood in this perspective, Twitter expelled the QAnon accounts for violating regulations on social discourse (namely, by supporting violence and thus threatening the process of discourse itself).

Locke’s and Rousseau’s perspectives can provide a useful guide to assessing the issues related to free speech and the internet. Each perspective offers a framework which seems reasonable and yet is opposed to the other. Considering both, then, should allow for multi-sided and nuanced discussion. Employing these two frameworks (and other conceivable ones), as well as considering the opinions of more recent thinkers, can potentially enrich public discourse surrounding free speech and the internet.