Under Discussion: Undermining a Democratic Response 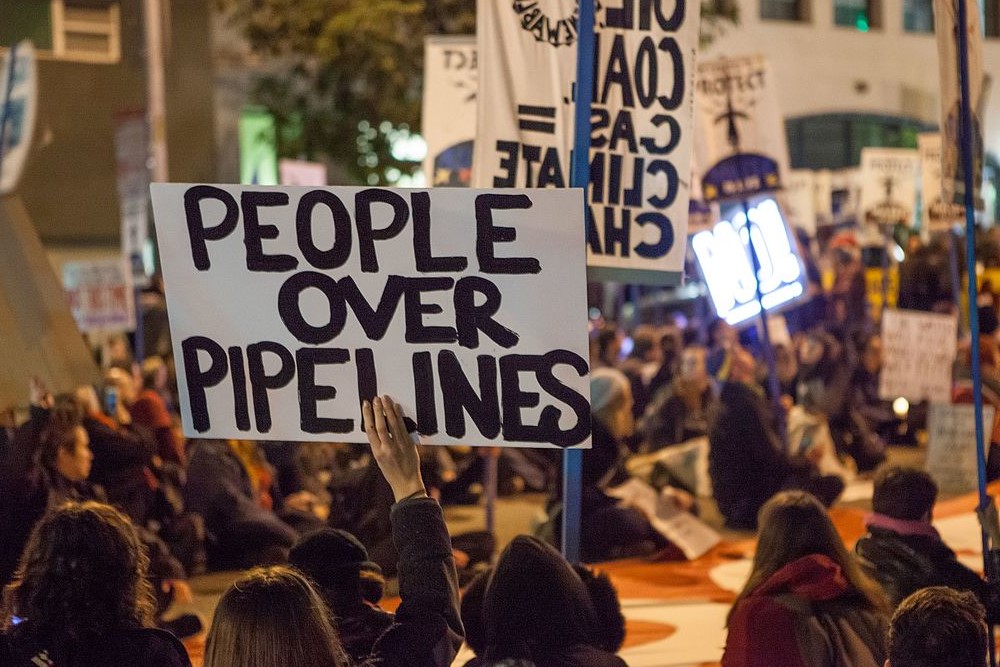 “Protest against Dakota Access and Keystone XL Pipelines” by Pax Ahimsa Gethen is licensed under CC BY-SA 4.0 (via Wikimedia Commons)

On the first day of his administration, President Joe Biden issued an executive order cancelling the permit for the Keystone XL Pipeline. Premier Jason Kenney of Alberta, the province where the oil sands are located, expressed his disappointment stating that this is “not how you treat a friend and ally,” and indeed Canada’s Premiers apparently “want to go to war” over it. This kind of political posturing reminds one of recent events. The riot at the U.S. Capitol followed weeks of politicians lying to voters about the election, and as a result people, who were frustrated by a reality that was not matching what they were being told, lashed out violently. If there is one lesson that any democracy should be able to learn from such an episode it is that misleading the public does have consequences, it undermines the capacity of voters to evaluate their options, and thus it undermines democracy. Does this lesson have relevance when it comes to climate change, something which has the capacity to wreak massive economic and social instability?

Was Keystone ever viable? Are Canadian politicians simply spreading false hope that there is a significant economic future for that pipeline? If so, are they on any better moral grounds than Republicans who lied about elections? First, it is important to recognize that the province of Alberta is heavily dependent on natural resource development, particularly the extraction of bitumen from the oil sands. In recent years, this sector has been badly hit by floundering oil prices, troubles getting pipelines built, and now more recently COVID-19 has caused prices to drop resulting in even lower oil revenues. The Alberta economy, slowly recovering from a recession, has now been even harder hit. Unemployment is up, and investment is down. As a result, the Alberta government is now running a record high deficit.

In an effort to push back against these forces over the past few years, the Alberta and Canadian governments have been significant supporters of the Keystone XL pipeline. Despite the troubled history of the project, the Alberta government became an investor in order to move construction along at a cost of 1.5 billion dollars with an additional 6 billion in loan guarantees. It was expected that the pipeline could create tens of thousands of jobs. Despite all of this, the pipeline project has been troubled since its inception. It has been met with opposition from indigenous people for cultural, treaty, and health reasons, and it has been widely protested because of concerns about the climate. While some concerns involve air pollution, and the potential for an oil spill, the potential for increased carbon emissions has been especially problematic politically speaking. Extracting the crude bitumen of the Alberta oil sands involves 17% higher carbon emissions than conventional oil. As a result, then-President Obama was heavily lobbied to deny a permit for construction, ultimately doing so because it was seen as undercutting the credibility of the United States in climate change negotiations. Eventually, President Trump did issue the permit for construction, before this permit was withdrawn by President Biden.

The question is whether Keystone XL was ever a very realistic option for the Alberta government to cling to. Was the writing on the wall? As Canadian journalist Aaron Wherry notes, “The project’s fate seemed sealed years ago, but it haunts us still.” Afterall, there were years of court challenges, revisions to the design, permits were granted and taken away. The public soured on the project as well. In just four years public support in the United States for the project fell from 65% approval to 48%. A 2017 poll of Canadians found that only 48% supported the project even though 77% of Albertans supported it. Investors were shy about putting money into the project, and thus the Alberta government is now on the hook for billions of dollars. And, with the public and politicians increasingly showing a willingness to act on climate change, this project’s future was always in question.

Despite this, the Alberta government continued to, and continues to, unrealistically give the public the impression that something can be done to change this. Alberta Premier Jason Kenny, for example, was said to be counting on union support in the United States for the project, despite “not understanding American politics well enough to know that that particular ship has sailed; it was as realistic as the company’s Onion-esque last minute pledge to power the operation of the pipeline with renewable energy.” And as Warren Mabee of Queen’s University notes, “While the reaction from Alberta implies Biden’s move came as a shock, the truth is that cancelling Keystone XL was a key part of Biden’s election platform” and has suggested that Canadian politicians should get a reality check when it comes to the oil sector.

So, it is worth noting whether there are similarities between what Republicans told their constituents following the election and what Canadian politicians are telling theirs regarding Keystone XL. In both cases you have frustrated citizens, many vulnerable to unemployment and a lack of prospects. In the United States, Republican politicians granted credibility to the claim that there were significant election irregularities despite almost no evidence and were complicit in unrealistic and long-shot attempts to overturn the election in order to satisfy what their voters wanted to hear. In Alberta, politicians continue to grant credibility to the viability of pipeline projects which promise to restore good times to the province, despite evidence that the project was environmentally risky and that the project looked increasingly doomed. And now, even still Premier Kenny calls for trade sanctions which are considered “unrealistic and unproductive in the extreme” in order to appeal to a base of supporters.

In the case of the United States, the effect of this willingness to entertain lies about the election was the storming of the Capitol and the undermining of democracy. While the Canadian Parliament may be safe for now, the Alberta government has made use of inflammatory language and promises which may also undermine democracy. For example, the governing party of Alberta claimed that their predecessors “surrendered to Obama’s veto of Keystone XL” and ran on a promise threatening to hold a referendum over constitutional changes if they could not get a pipeline built. In other words, politicians trying to appeal to their base, optimistically attached their hopes to a pipeline that investors soured on and invested billions of public money into despite facing increasing political opposition at home and in the United States. As a result, the people of Alberta will likely be angrier at the Canadian federal government and the rest of Canada. Politicians could not be honest with their voters, and as a result social and democratic cohesion may suffer. Is there a moral difference between the two cases?

It is important to note that this is only a case study to demonstrate a larger moral concern. We have seen in the last year that citizens will accept complete falsehoods if it fits with what they want. Despite over 2 million people dying of COVID-19 in real time over the past year, many still believe that the virus is not real or is no worse than the flu. So, looking forward, what will happen when the effects of climate change become even more prominent? If Florida begins to sink due to rising sea levels, will that be branded as just a fluke or a bad summer? If actual economic and climate problems are facing society, it will be the convenient mistruths that will be exploited to undermine the ability of citizens to make decisions that are in their best interests.