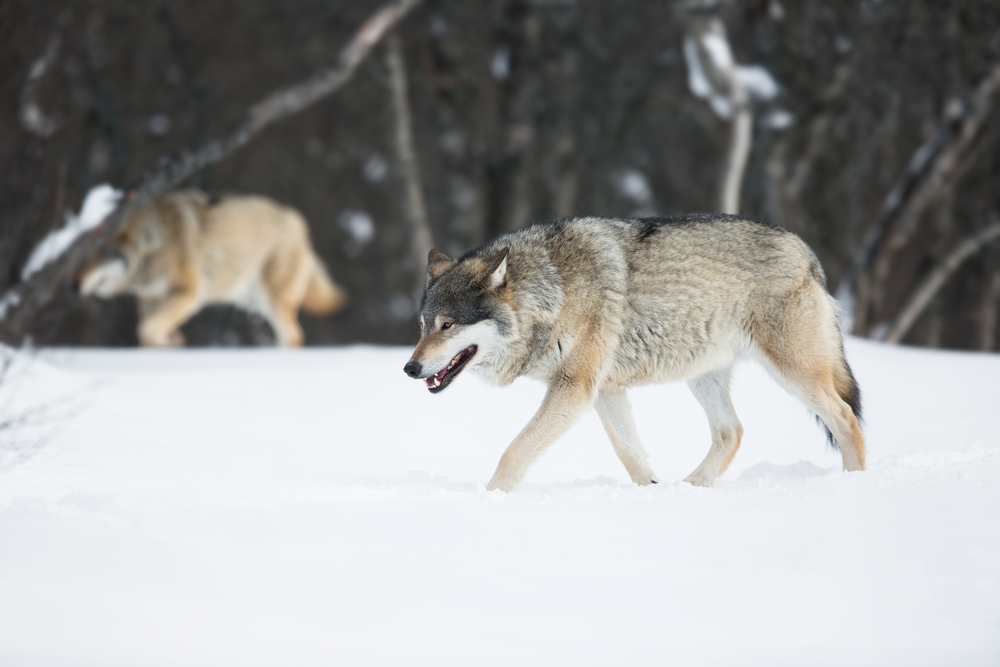 Earlier this month, the citizens of Colorado passed Proposition 114, a measure that reintroduces gray wolves into the local ecosystem. The measure involves a plan to reintegrate the wolves by the end of 2023. It passed with 50.4% of votes in support and 49.6% in opposition; it was quite controversial. Some citizens of Colorado view the proposal as a way to honor the promises we made when we passed the Endangered Species Act. Others are concerned about the potential threats posed by reintroducing a predator into the community.

The story of the disappearance of wolves from their native habitats is the story of human western expansion and colonialism. Wolves didn’t simply disappear all on their own. During this time, many people hunted recklessly and decimated populations of elk, deer, and bison. The result was that the food source for predators like gray wolves became limited. Some populations of wolves turned to eating livestock to survive. In response, humans killed every last gray wolf in Colorado. In fact, they killed virtually every gray wolf in the contiguous United States.

As time progressed, humans stopped hunting deer and elk at the same rates that they once did. At this point, however, wolves, the natural predators of these species, no longer existed. This imbalance fundamentally changed ecosystems. Deer populations exploded and ended up harming forests in various ways. Forestry departments embarked on deer-culling missions — the practice of killing deer in order to keep ecosystems and the other living beings that participate in them in some kind of equilibrium.

The Endangered Species Act was passed in 1973. It required the Federal Wildlife Service to, if possible, restore animals that have been eliminated from ecosystems. All species of wolves in the contiguous United States were listed as endangered so, in keeping with the act, the FWS was obligated to restore them. In some areas they satisfied this obligation. For example, in 1995 the federal government reintroduced gray wolves into Yellowstone National Park. The findings in Yellowstone suggest that reintroduction of wolves into an ecosystem appears to lead to greater biodiversity in that system. The carcasses of the animals on which wolves feed also serve as a source of food for scavenger species.

Some concerns with Proposition 114 are procedural. Many felt that the issue should not have been up to voters to decide. Reintroduction of gray wolves will impact some areas of the state more than others. Critics are concerned that those who voted in favor of reintroduction are not the people who will have to face the consequences. For example, some rural voters argue that it was urban voters who dictated the trajectory of the vote. Urban voters won’t have to deal with the wolves.

Farmers and cattle ranchers are concerned about the impacts that the presence of wolves might have on their livestock. Ranchers are concerned about the well-being of their animals. Despite the fact that they are raising them to be slaughtered, ranchers would like to be able to allow cattle to freely graze without concerns that they will fall prey to wolves. They feel it is their obligation to protect their livestock up until the time when they send them to CAFOS and slaughterhouses, and the reintroduction of wolves into the ecosystem makes satisfying that duty more difficult. What’s more, because gray wolves are endangered, if a rancher actually witnesses a wolf threatening their cattle, they cannot kill or harass the wolf without risking jail time or a $100,000 fine. That said, there is no reason to believe that scaring the wolf off would expose the rancher to the threat of fine or jail time.

Another pressing concern is that cattle are an investment. To make a living, ranchers need that investment to pay off. If their animals die before they can be sold, the ranchers lose money. In response to this concern, however, advocates of the measure point out that it includes a commitment to offer compensation to ranchers who lose livestock to wolves.

Many ranchers also consider these kinds of environmental policies to be an existential threat to their way of life. They claim that the environmental movement, and conservationism in particular, needs rural allies. Some rural dwellers feel that urban environmentalists are not looking out for the interests of farmers and ranchers and as a result they feel little motivation to cooperate on issues related to public lands.

There are also concerns for the deer and elk populations who will be hunted by the wolves. When we reintroduce a predator into an ecosystem, we increase the extent to which that predator’s prey will experience fear. We also increase the likelihood that deer, elk, and other potential wolf prey will experience more painful deaths than they otherwise might have. It may be true that some of these animals will ultimately be killed by humans as part of wildlife management efforts, but deaths by these hunters are more likely to be fear and pain free.

Advocates of Proposition 114 argue that we have a moral obligation to protect endangered species. Arguments for this conclusion take several different forms. One is that we have a moral obligation to rectify harms and injustices that human beings have brought about. To the extent that wolves ever did humans any harm, they did so because of the changes that we made to their ecosystem. Advocates of Proposition 114 argue that it was unjust for us to kill off wolves en masse, so we now have an obligation to restore what we have diminished. Human beings are responsible for mass extinction events, and we need to take responsibility for that. The form that this responsibility takes should be more than feeling guilt and mourning the loss. We should actually do something about it, in those cases in which we still can.

Some thinkers, like ecologist and conservationist Aldo Leopold, have argued that species have intrinsic value. The continued existence of any given species is testament to the fact that it has endured the harsh tests of time and the ravages of nature. When the story of a species is brought to an abrupt end unnecessarily by humans, it’s a great tragedy.

Still others argue that it is best for ecosystems to manage themselves naturally. They contend that the equilibrium established by nature is usually more sustainable than a balance that human beings attempt to artificially establish. The reintroduction of the wolf renews the potential that the ecosystem has of attaining that natural balance. This is better, in the long run, for the ecosystem, and ecosystems are worth preserving.

At the end of the day, this case lays bare a fundamental tension in our country that is about more than just gray wolf populations. Environmental change, and what many would refer to as environmental justice, requires people to adapt their lifestyles. Making these changes is easy enough for some, but it is much more difficult for others. Some people’s livelihood, and, indeed, some people’s very identity, is tied up in practices that will be dramatically altered or even eliminated by efforts to protect and preserve the environment and the living creature that inhabit it. It’s no wonder the country is deeply divided.