Hypocrisy and the Fall of Falwell 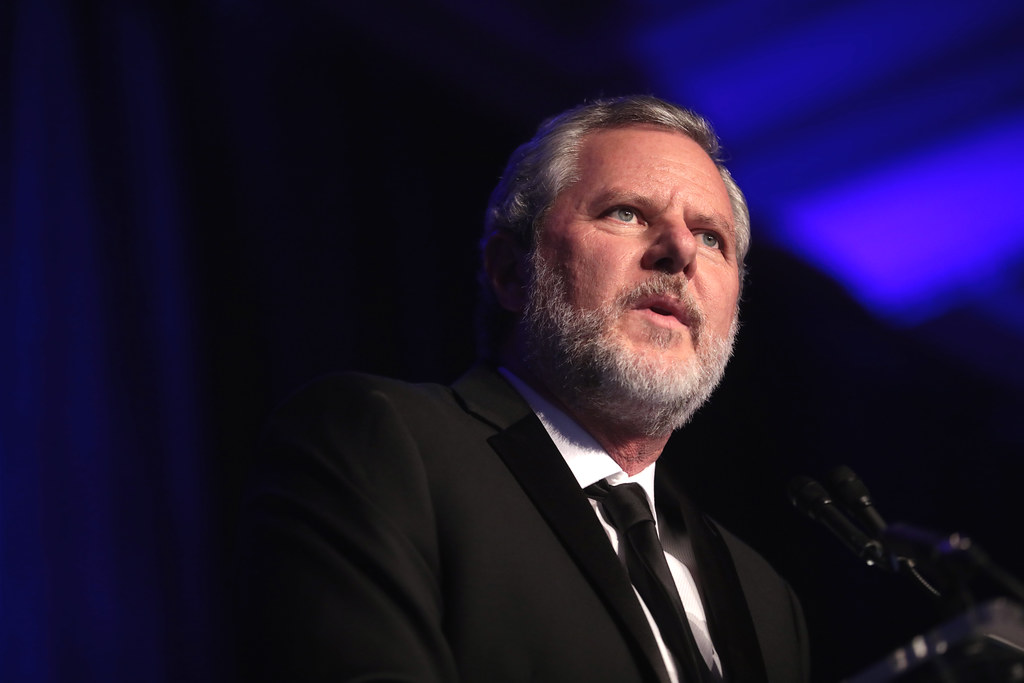 It has not been a good week for Jerry Falwell Jr. It began when the prominent evangelical posted a bizarre photograph on Instagram of himself with his pants unzipped and his arm around a bare-midriffed woman who is not his wife. Falwell tried to do damage control with a radio spot that, owing to his possibly substance-induced incoherence, dug him deeper into the hole. Days later, the board of trustees of Liberty University, an evangelical college in Lynchburg, Virginia, announced that Falwell will be taking an indefinite leave of absence from his role as president and chancellor. While Falwell has been accused of arguably much more serious misconduct, the final straw appears to have been this display of flagrant hypocrisy; Liberty Law School’s honor code includes prohibitions on “display of objects or pictures” that are “sexual in nature,” “sexually oriented joking,” “the encouragement or advocacy of any form of sexual behavior” that would undermine the University’s “Christian identity,” and the possession of alcohol (in the picture, Falwell holds a glass of what he calls “black water”).

Falwell’s is not the first case of hypocrisy by a high-profile religious leader. Yet the ethical argument against hypocrisy is far from clear. What is it about hypocrisy that makes it morally objectionable?

In order to answer this question, we must first say what hypocrisy is. Ask most people, and they will tell you that hypocrisy is not practicing what you preach. But consider this: in the process of becoming mature adults, we often do things that we later condemn, or condemn things we later do. On some occasions, this can amount to hypocrisy — particularly if we try to hide the fact that we previously engaged in the behavior of which we currently disapprove. Yet it does not have to be hypocritical to acknowledge that we have undergone moral improvement, and as a consequence currently disapprove of what we did in the past. So, not practicing what you preach is not enough to make someone a hypocrite. I believe that what’s required, beyond the inconsistency between our words and deeds, is that this inconsistency involves representing oneself as better than one is by the lights of some community’s moral standards.

One suggestion is that hypocrisy is a form of dishonesty. Hypocrites pretend to be better than they are, thus deceiving others about their moral commitments and concerns. Upon reflection, however, this can only be a small part of the story. There is a certain type of hypocrite — we might call her a cynical hypocrite — who consciously pretends to be morally better than she is in order to obtain some extrinsic benefits, such as social status. This kind of hypocrisy does involve dishonesty. Yet many hypocrites — indeed, those who on some views most clearly deserve the label — are perfectly sincere in their belief in their own goodness, as well as in their condemnation of others for norm violations. It might be suggested that the problem with these hypocrites is that they are self-deceived, but even if this is true, self-deception does not usually invite the sort of moral opprobrium to which hypocrites are regularly subjected.

Another suggestion is that, because hypocrites are primarily concerned with representing themselves as morally better than they are, their words are unlikely to represent (a) their actual values or (b) the “correct” assessment of the moral facts. Insincere hypocrites are motivated to hide their true commitments behind the appearance of goodness, while sincere hypocrites are likely to make whatever moral judgments will represent themselves in the best light. In either case, their testimony about (a) and (b) is suspect. The suggestion, then, is that hypocrisy is a kind of untrustworthiness. While I think this diagnosis gets at something important about hypocrites, it does not explain our moral objection to them. After all, there are plenty of people whose testimony we cannot trust, but whom we do not loathe. Think, for example, of an extremely naïve person whose moral judgments are clouded by a misplaced faith in human goodness. Such a person is not trustworthy, in the sense that it would be foolish for us to rely on their testimony when deciding the morally right course of action. We might even criticize such a person for being naïve. But we would not have the strong negative response to this person that we regularly do to hypocrites.

The last and, I think, best suggestion is that hypocrites are free riders, enjoying the advantages of undeserved moral approval while secretly collecting the dividends of vice. On this view, what makes hypocrisy objectionable is that it tends to cause hypocrites to appear better than they really are, whether they are sincere or insincere. So long as their hypocrisy remains unmasked, others will reward this apparent goodness even as the hypocrite continues to reap the benefits of acting contrary to moral standards. This account seems able to explain why we hate hypocrites so much: generally, we tend to hate people who obtain advantages they don’t deserve, as well as those who fail to make their contribution to goods we all enjoy — in this case, morality itself. It offends our deeply ingrained, and possibly innate, sense of fairness.

To return to Falwell and others like him, we can now see one important reason why even other evangelicals might have a strong negative response to his behavior. Leaders of all kinds, but particularly leaders of religious communities, often owe their status in part to a belief that they exemplify certain moral virtues. When such leaders are unmasked as hypocrites, this reveals that their leadership role, with all the perks that come with it, is undeserved. And this strikes us as deeply unfair; after all, there are plenty of other people who are earnestly striving to live according to often strict standards, yet who receive less praise and other benefits for doing so.

Thomas Hobbes called hypocrisy a “double iniquity,” suggesting that it was actually worse than outright villainy. On the fairness account, this makes sense: the hypocrite not only violates moral norms, but commits the further wrong of free riding on others’ compliance with moral norms in order to reap the undeserved benefits of appearing good and doing evil. In short, there are grounds for thinking that being a hypocrite with respect to some standard is worse than simply flouting the standard. This still doesn’t mean that hypocrites are always worse than simple wrong-doers — not all standards are equally important — but it does mean that hypocrites with respect to some rule, like Falwell, are liable to more loathing than someone who simply breaks that rule, like Falstaff.