Call It What It Is: On Our Legal Language for Racialized Violence 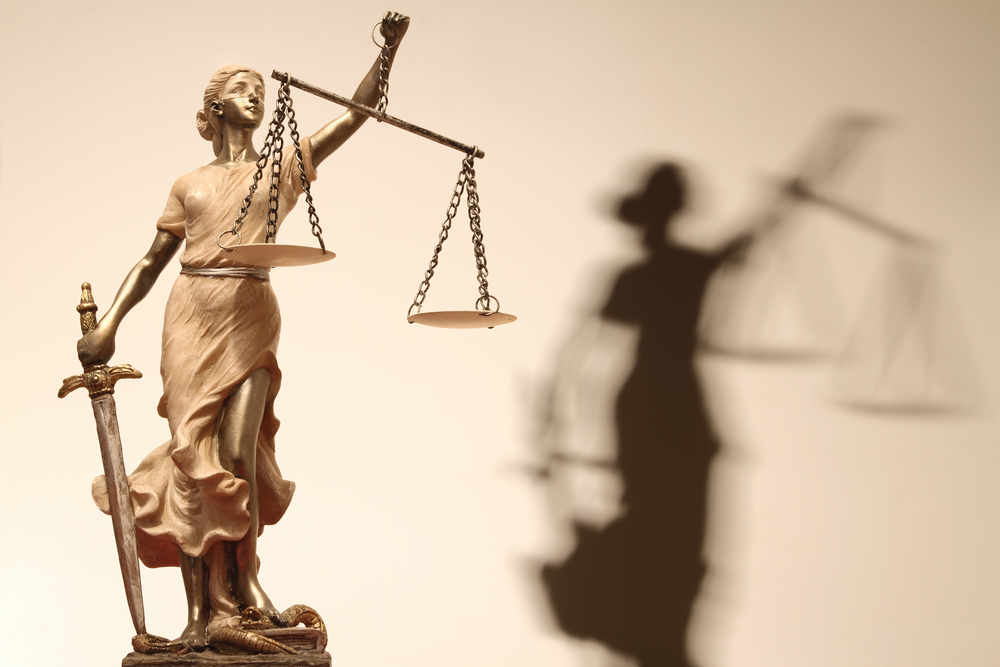 “Justice is blind ( …or maybe not )” by kanvag (via depositphotos)

This week, as seems to be the case every week in the U.S., we have seen Black people threatened with harm and killed for no other reason than their race.

I use “see” purposefully. The increased use of cameras to document the context surrounding the harassment, assault, and murder of Black people has raised awareness in recent years beyond the communities that have been experiencing this violence continuously. The incredible and outsized use of force and aggression towards non-white people is laid bare by the traumatic videos capturing these violent acts.

White supremacist violence from the past week includes the murder of George Floyd, an unarmed man, by four Minnesota police officers and the racist, false police report of Amy Cooper against Christian Cooper, a bird watcher in Central Park.

While both the police officers and Amy Cooper are no longer employed and may face further consequences, their actions form part of a much broader system of oppression and violence — a system we seem to lack sufficient moral language, or the proper legal framework, to fully capture.

Amy Cooper can face misdemeanor charges for making a false report under New York law. The penalty for such misdemeanors in the state is up to one year in jail, and a fine up to $1,000. The reasoning behind such statutes is that by making a false report you have done harm to the criminal justice system itself. The aspects of the law include a mens rea element (a state-of-mind aspect), requiring that you knew the report to be false, and an actus reas element (the behavior of the violation), which is actually reporting the crime to the relevant authorities. Cooper meets both of these elements pretty straightforwardly.

However, as this statute targets the harm done to the justice system and peace officers, it is easy to see that there is more to the moral and legal context of her behavior than simply tying up police resources.1 As is clear in the video Christian Cooper recorded, Amy Cooper focused on Christian Cooper’s race both in her threats to him personally off the call, and by heightening her vocalization of distress while describing him as “African American” to the operator. She thus put Cooper at significant risk, harnessing her power as a white woman and targeting him as a Black man, by directing police attention on him. The shared understanding of the danger that Christian Cooper experiences in the world is necessary for her threats to land and her harassment to be effective. As Christian Cooper said when explaining his filming of her harassment, “We live in an age of Ahmaud Arbery, where Black men are gunned down because of assumptions people make about Black men, Black people, and I’m just not going to participate in that.”

In order to capture the racist motivations behind Amy Cooper’s behavior, we could look to the legal category of hate crimes. These crimes involve specifically targeting members of specific groups. Those specific identities protected by hate crime legislation include race, gender, religion, age, disability, sexual orientation, as well as others. “Reckless endangerment,” for example, is one of the crimes that can be classified as a hate crime when targeting an individual based on their race. To include Amy Cooper’s behavior under this category would be expanding the current understanding of reckless endangerment, but it could be a route to adequately identifying the power being wielded and the threat being made.

This crime possesses both mens rea and actus reas elements; Cooper shows disregard for the foreseeable consequences of her action, and her behavior imposes a substantial risk of serious physical injury to another person. Note that the accused person is not required to intend (aim explicitly at) the resulting or potential harm in order to qualify as reckless endangerment. If, however, a case could be made that Amy Cooper was, in fact, intending for Christian Cooper to be harmed by her actions, the crime would qualify as some degree of attempted assault. Regardless, the distinction that is important here is that Amy Cooper is aware of the risk of harm she is placing Christian Cooper in by drawing police attention to him, but she is either disregarding that risk or marshaling that risk (bringing us into the realm of intentionality).

It’s not hard to imagine a potential objection claiming that Amy Cooper can’t know the danger her phone call places Christian Cooper in, and therefore can’t be held responsible for the harm that might ensue. But that would suggest at least culpable negligence, given the many recorded and shared instances of police violence towards Black people and the fact that Amy Cooper pointedly racializes the interaction.

To appeal to negligence, Amy Cooper would have to claim to not have recognized that her actions drawing police attention to Christian Cooper in Central Park would create a substantial risk of physical injury — she would be claiming to be unaware of the systemic violence that she is wielding.

To paraphrase Christian Cooper, we live in the world of Ahmaud Arbery, whose death again showed that assumptions made about Black men mean that even jogging while Black can be a serious risk. We also know that relaxing in the comfort of one’s own home can put Black people at risk of serious threat when confronted by police (#BreonnaTaylor, #BothemSean and #AtatianaJefferson). So can asking for help after being in a car crash (#JonathanFerrell and #RenishaMcBride), having a cellphone (#StephonClark), playing loud music (#JordanDavis), cashing a check (#YvonneSmallwood), or merely taking out a wallet (#AmadouDiallo).

We have also seen that the assumptions made by white people put Black people at risk of death when they sell CD’s (#AltonSterling), sleep (#AiyanaJones), walk from the corner store (#MikeBrown), play cops and robbers (#TamirRice), go to church (#Charleston9), or walk home with Skittles (#TrayvonMartin).

It is dangerous for a Black person to be at his own bachelor party (#SeanBell), to party on New Year’s (#OscarGrant), to decorate for a party (#ClaudeReese) or simply leave one to get away (#JordanEdwards), to lawfully carry a weapon (#PhilandoCastile), to shop at Walmart (#JohnCrawford), and to be a 10yr old walking with his grandfather (#CliffordGlover).

When police confront Black people, they are at serious risk to their life when they have a car break down on a public road or have a disabled vehicle (#CoreyJones and #TerrenceCrutcher), get a normal traffic ticket  (#SandraBland), or if they read a book in their own car (#KeithScott).

Police officers use excessive and lethal force when confronted with Black men that run (#WalterScott), ask a cop a question (#RandyEvans), or are in custody (#FreddieGray) or breathe (#EricGarner).

The list goes on. And it should feel overwhelming. The extent of the violence, and the context of the activities that put these individuals at risk, make any claim Amy Cooper has to being unaware of the danger she was placing Christian Cooper in dismissable.

In response to public outcry, Amy Cooper claims to have been scared, not motivated by race and not to have intended any harm come to Christian Cooper. However, both in our moral and legal evaluations of actions, whether or not someone intended the harm or potential harm is not the only standard we have.

Consider the following set of examples. Imagine I have friends over for a bonfire and am excited to use a new purchase “Rainbow Fire.” These packets, when added to a fire, make the flames appear in multiple colors — very exciting. However, because the packets involve chemicals in order to achieve the colorful result, they end up causing harm to those in close proximity to the fire. In effect, my adding the packets to the fire have caused harm to come to my friends. Our moral (and, roughly, legal) evaluation of my behavior is more nuanced than a simple judgment as to whether I intended to cause them harm or not.

Even if I wasn’t harming intentionally, I still was engaging in behavior that DID cause harm. It was a risk I should have been aware of. Packets that make fires colorful, after all, are pretty likely to be full of chemicals, and if I didn’t check the packets, I neglected dangers I should have attended to, and my friends have every right to be upset that I failed to take precautions and appreciate risks.

A step up from this kind of negligence is being aware of risks, but choosing to disregard them. If I read the packet but decided to proceed anyway, I behave “recklessly.” My friends will have moral (and legal) grounds to blame me.

But if I know that the packets will harm you (it’s a guarantee, not just a degree of likelihood), this goes beyond assessing risk or being ignorant of them. Acting knowingly is just short of intentionally, because though I might not be plotting your lung damage and was aiming at something else, I was aware that the lung damage was going to be a result of my behavior, not merely a risk disregarded. This is a level of mental engagement that we take more seriously, morally and legally.

So, even if we take seriously Amy Cooper’s denial of intentionally causing harm, we still have moral and legal concepts with which to evaluate her responsibility. She put Christian Cooper at risk, which is morally and legally problematic no matter what her mental state. And, unlike in my fire example above, she has weaponized race in a way we should hope to be able to acknowledge in our legal framework somehow. We need a means of capturing the unique abuse of power and the violence Amy Cooper threatened Christian Cooper with on the 25th of May.

I hope to have at least offered suggestions of standards that could be used. The mental state, behavior, and power structure that harnesses the racial targeting are all relevant to the legal evaluation of Amy Cooper’s actions. These considerations can give us further tools to establish the particular features of the racist harms in other violent behaviors being recorded every week.

1 We can note that often with false report violations, there can be civil suits filed. Civil suits, in contrast to criminal suits, are between citizens instead of between a citizen and the state. They focus on the damage one citizen caused another, rather than crimes (such as assault, theft, trespassing) that the state has determined its own authority to be justified. Civil cases include emotional distress, defamation, etc., and a successful result is typically financial restitution. Civil cases treat potential harms and exposure to risk differently, and so aren’t apt for this scenario.