Stories of Vulnerability: COVID-19 in Slaughterhouses 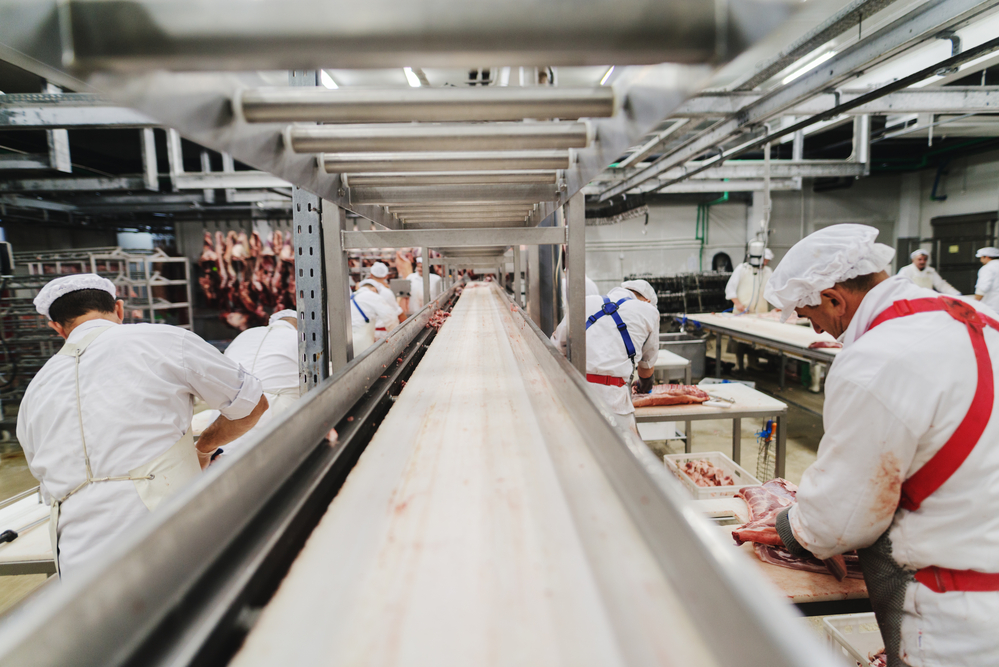 Cases of famous people who have contracted COVID-19 have made headlines. Tom Hanks and Rita Wilson tested positive and later recovered. U.K. Prime Minister Boris Johnson wound up in intensive care. Many professional athletes have contracted the disease. More often than not, however, when we zoom in on coronavirus hotspots, we find that stories about vulnerability come into focus. Many of these stories go unheard unless they cause hardship or inconvenience for groups with more power.

One such case has to do with the production and slaughter of animals that people consume for food. Across the country, there are meat shortages caused by coronavirus. For example, nearly 1 in 5 Wendy’s restaurants has run out of beef, and at many locations other meat products such as pork and chicken are unavailable as well. Supermarkets are also facing shortages. The reason is that the conditions in slaughterhouses are particularly conducive to the spread of coronavirus. Hot spots are popping up at many such sites. 700 employees at a Tyson factory in Perry, Iowa tested positive. At a Tyson plant in Indiana, 900 employees tested positive. According to a CDC report, across 19 states there have been 4,913 cases of coronavirus among slaughterhouse employees. So far, there have been 20 deaths.

Slaughterhouses, also known as meat packing plants, are the next stop for most farm animals after their time in factory farms. When mammals like pigs and chickens arrive, they are put on conveyor belts, stunned, then killed. Their bodies are then sent to a series of “stations” where people carve them up for packaging and, later, consumption.

Work in a slaughterhouse is both physically and psychologically strenuous. Carving flesh and bone requires real effort, and many employees sweat profusely while doing it. The sheer volume of animals that need to be carved up to satisfy the American appetite for meat ensures that employees work together, standing shoulder to shoulder, in spaces that are often poorly ventilated.

This kind of work is not highly sought after for obvious reasons. It is unpleasant. As is so often the case in the United States, unpleasant work is done by those who struggle to find employment—often undocumented immigrants and people living in low-income communities. This complicates the problems with coronavirus spread in several ways. First, employees often do not speak English fluently, so conveying critical information about the virus is difficult. Second, it is common for members of these communities to live in large families or groups. Third, low-income communities are frequently places that are densely populated. All of these factors contribute to more rapid spread of the virus.

In response to the meat shortage, President Trump signed an executive order declaring that meat processing plants are critical infrastructure in the United States. There is disagreement among legal experts about what this means. Some argue that the president doesn’t have the authority to require that slaughterhouses remain open when their continued operation puts employees’ health in jeopardy. One interpretation is that the order simply exempts slaughterhouses from shutdown orders issued by governors. Despite the executive order, plenty of slaughterhouses have closed because they simply don’t have the healthy staff required to carry on.

Those who are supportive of the order are pleased that it provides support to companies that sell meat. Many Americans also approve because it appears that they can continue to put meat on their plates to feed their families and to satisfy their own gustatory preferences. Others approve of the order because they are concerned about the well-being of animal agriculture more broadly. Factory farms raise astonishing numbers of animals every year. The owners of these facilities are not breeding and raising them because they love animals and want thousands of pigs for pets. In these facilities, animals are treated as products to be bought and sold. During the pandemic, new animals are being born and there is no place to put them. The response, in many cases, has been to kill the older animals en masse. For example, Iowa politicians sent a letter to the Trump administration asking for assistance with the disposal of the 700,000 pigs that must now be euthanized each week across the country. The same problem exists for all species of farm animals. People are concerned that this might mean devastation for animal agriculture.

On the other side, many say “good riddance!” Animal agriculture is a cruel and inhumane industry. The pandemic has few silver linings, but one of them is that it brings injustices that might previously have been hidden into the public eye. Our system of animal agriculture could not exist without exploitation of the most vulnerable members of our communities. Slaughterhouses employ vulnerable workers in unsafe working conditions. Factory farms and slaughterhouses abuse and kill animals that cannot defend themselves. Maybe it is finally time for all of this cruelty and suffering to end. In his executive order, President Trump identified slaughterhouses as critical infrastructure. This means that such places are essential, necessary for the proper functioning of our communities. Since consuming the bodies of slaughtered animals is not necessary for human survival, this designation doesn’t seem appropriate.

What’s more, the conditions present in factory farms are exactly the kind that lead to the spread of zoonotic diseases. It appears that the coronavirus jumped from pangolin to human in a wet market in Wuhan. On other occasions, however, diseases spread in factory farms and slaughterhouses—diseases like the swine flu and mad cow disease. Other flus, like the avian flu, are believed to have originated in wet markets in China, but involved animals, chickens and ducks, that we regularly farm for food in the United States. One way that we can help to prevent the transmission and spread of zoonotic diseases is to stop consuming meat.

For those that love the taste of meat, there are alternatives. Beyond Meat and Impossible, plant based products that are engineered to strongly resemble meat in taste, texture, and appearance, are thriving in general, but are doing exceedingly well during the pandemic in particular. In vitro meat, a cellular cultured product that is produced by taking a biopsy of an animal, is a product that is produced in laboratory conditions rather than slaughterhouse conditions and is, therefore, likely to be much safer.

The pandemic shines a light on some of the ways in which our systems of food production exploit the vulnerable—both employees at risk for disease and the animals people put on their plates. Rather than issuing executive orders protecting this industry, perhaps it’s time to dismantle it altogether.