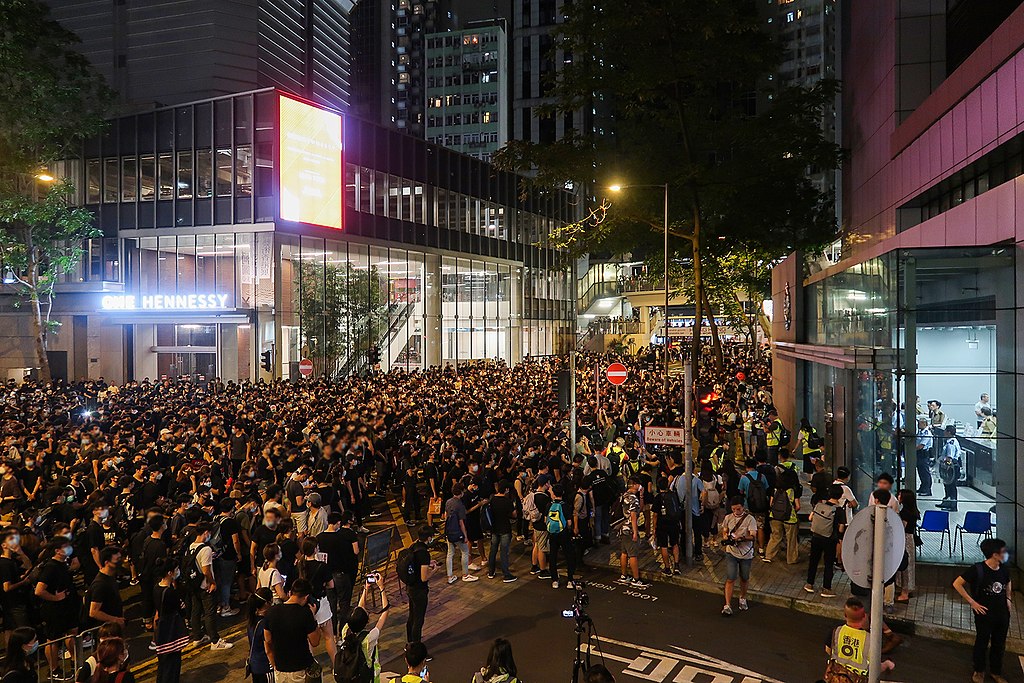 “Police Headquarters protest” by Wpcpey is licensed under CC BY-SA 4.0 (via Wikipedia)

Protest and civil resistance is quickly becoming one of the defining characteristics of the new century, from the early gains of the Arab Spring, the protest movements throughout Latin America, the Hong Kong democracy movement to Greta Thunberg’s School Strikes for Climate and the Extinction Rebellion movement in response to the climate and ecological emergency.

Philosophers began to theorize about social change in terms of methods of nonviolent social intervention in the Nineteenth Century. Henry David Thoreau, in the essay Civil Disobedience, defends the validity of conscientious objection to unjust laws, which he claims ought to be transgressed. He writes “all men recognize the right of revolution; that is, the right to refuse allegiance to and to resist the government, when its tyranny or its inefficiency are great and unendurable.”

Early social movements, such as the campaign led by Mohandas Gandhi against the British colonial occupiers of India, connected non-violence with pacifism and cemented that as a deontological moral principle. In the early years of the civil rights movement, Martin Luther King wrote:

“non-violence in the truest sense is not a strategy that one uses simply because it is expedient in the moment,  [but as something] men live by because of the sheer morality of its claim.”

For Gandhi and King the practice of nonviolence is grounded in the timeless and universal values of love, compassion, and cooperation. This view is closely related to the philosophy of pacifism, which holds that all violence is immoral. Pacifism is principled, moral opposition to war, militarism or violence. As such, it arises not out of a discipline or practice, so to speak, but out of a strongly held philosophical and spiritual belief.

Conditional pacifism, which is a version of pacifism with some possibility for compromise, is utilitarian in nature, such that the bad consequences are what make it wrong to resort to war or violence. However, based on utilitarian principles, there could be a situation where violence of some magnitude is morally permissible if it prevents violence of a greater magnitude. That is, according to conditional pacifism, there could be situations where violence is necessary to prevent worse outcomes.

The idea of pacifism, and of seeking non-violent solutions to disputes between and within nations, plays a significant part in international politics, particularly through the work of the United Nations. But there is, within this structure, a recognition that sometimes (in theory at least, though this has been notoriously difficult in practice) a need for ‘humanitarian intervention.’

An anti-pacifist view would not exactly advocate war as a good in itself, but would hold the view that sovereign states have a duty to protect their citizens, and that duty may in some circumstances extend to the waging of just war – and furthermore that in this case, citizens have a duty to carry out certain tasks. The critical, anti-pacifist view holds that pacifists’ refusal to participate in war means that they fail to carry out an important moral obligation, and that the respect for human life that motivates them is an idealistic but counterproductive position.

On the other hand, there is a different alternative to pacifism, which does not sanction violence but does differentiate itself from the pacifist’s principled, moral position. This is known variously as ‘strategic non-violence’ or ‘nonviolent direct action.’

Gene Sharp, theorist and author of seminal works on the dynamics nonviolent conflict, sought to redefine it outside the context of pacifism and outside the sphere of the moral question of violence. Sharp contends that nonviolence can be employed strategically, as something that social movements can choose because it provides an effective avenue for leveraging change. For example, in overcoming a dictatorial or repressive regime, such as the popular uprisings which ended Milošević’s reign in Serbia in 2000, or in effecting social change within a broader social context, such as the civil rights movement in the United States in the 1960’s.

Maintaining a strict nonviolent discipline for strategic reasons has, according to Sharp, several important strategic advantages over armed civil resistance, as does using strategic nonviolence as a method of waging conflict rather than as a moral position. Strategic nonviolence is active as a form of conflict, therefore much more likely to be effective in creating or forcing social and political change, and nonviolence maintained as a strict discipline makes a movement vastly more inclusive, allowing for widely participatory campaigns of direct action.

Maintaining nonviolent discipline is necessary against a state that has a well-developed arsenal. The state has a monopoly on violence: a group of citizens taking up arms against a regime is usually vastly outgunned. But, importantly, armed struggle legitimizes the state’s use of force against the citizens.

This is not to say that those using strategic nonviolence will not be harmed. In the conflicts mentioned above, and many more around the world, the state may turn on demonstrators or strikers. This often backfires as it creates negative public response and shows the state’s apparatus to be reacting disproportionately, which can create sympathy for a cause and can sometimes greatly strengthen it, but at a large cost.

Strategic nonviolence is therefore an effective alternative to armed struggle, conceived of as a form of resistance and, perhaps perversely, as an effective form of waging war.

A common feature of pacifism is the belief that winning adversaries over to one’s cause is necessary, effecting a change of heart, and being able to love one’s enemies. Sharp rejects this position, arguing that expecting people to love those who have wronged them or treated them cruelly is not only unreasonable, but unwise as it might lead people to turn towards violence.

Instead, our goals may need to be different. As civil rights leader James Farmer writes: “where we cannot influence the heart of the evildoer we can force an end to the evil practice.”

It is in this sense that strategic nonviolence has an overarching ethic – because King is right that there is ‘a sheer morality in its claim.’ I am not sure Sharp would make the argument this way, but you could say that the ethical rewards are the social and political improvements in principles of justice and freedom won by the more effective strategies of nonviolent resistance; that nonviolence is better, morally, is an effect, not a cause of the principle of nonviolent resistance.