Smoking Legislation and the E-Cigarette Epidemic 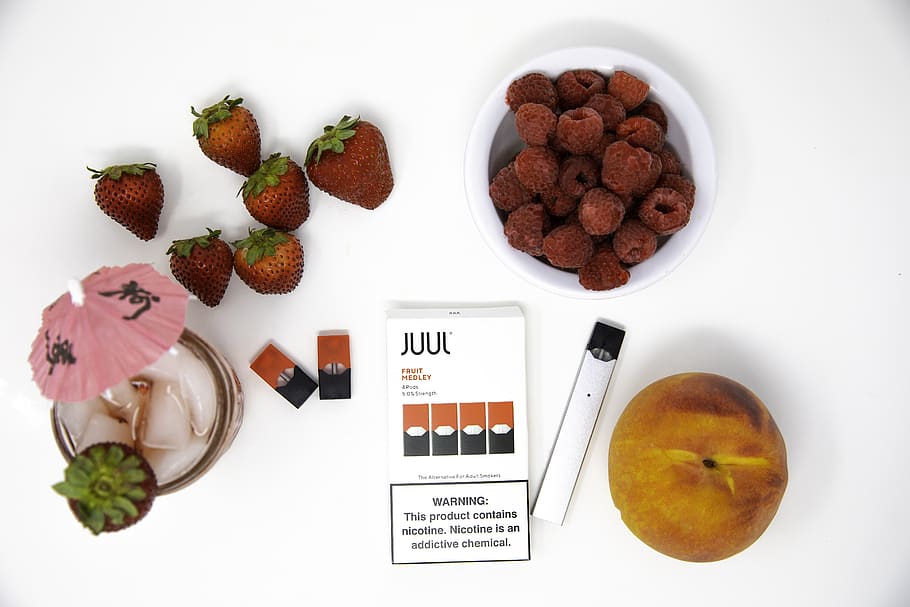 “vaping, vape, smoke …” by sarahj is licensed under CC0 (via Pixabay)

At the end of the year, President Trump signed legislation changing the federal minimum age for tobacco and nicotine purchase from 18 to 21. This move to raise the federal smoking age was made in response to the popularity of e-cigarettes amongst teen users and the e-cigarette epidemic. To combat this public health crisis, attempts have also been made to ban flavored e-cigarettes. For e-cigarettes to stay on the market, vape companies will need to prove that they cause more good than harm. This proposed legislation applies to all e-cigarette companies, threatening the smaller vapor manufacturers as well as Juul Labs, who make up seventy-five percent of the nine-billion dollar industry.

Juul pods, marketed at millennials and teen users, contain twice the amount of nicotine found in traditional freebase nicotine e-cigarettes These products are especially addictive and are sold in a variety of fruity flavors making them very appealing to children. It’s unsurprising, then, that America’s youth are hooked. In fact, one can hardly walk across a college campus or use the bathroom of a high school without seeing a Juul user “fiending.”

But Juul Labs isn’t just selling their products to children; children are their targeted demographic. Although e-cigarette executives publicly claim nicotine vaporizing devices have always been about a safer smoking alternative to traditional combustible cigarettes, looking to social media advertising tactics from the company’s inception, as well as interviews with investors and employees, children have always represented a main marketing target. Using youthful brand ambassadors that fit the young demographic and advertisements featuring millennials at parties demonstrate the company’s clear attempts to market the sleek e-cigarette device to young people. A study conducted by the University of Michigan two years ago emphasized the dramatic rise in high school students – a generation with historically low tobacco use – in just a single year. And many blame Juul Labs for their irresponsible marketing tactics that created a generation of kids addicted to nicotine.

Even scarier than the addiction that it causes are the health risks. Throughout the summer of 2019, thousands of teens were hospitalized and 39 e-cigarette related deaths were reported to the CDC. Although the vaping illness was linked to vitamin E acetate, an ingredient in illicit THC vape cartridges, since the outbreak, legislatures have had full support of curbing teen vaping from concerned parents across the nation.

Another issue with Juul Labs is their association with Big Tobacco. While it may seem as though e-cigarette companies are the tobacco industry’s biggest competitor, for the most part, the tobacco industry and vaping industry are becoming more and more related. Altria, of Marlboro cigarettes, recently bought a 35% stake of Juul Labs for $12.8 billion, and the e-cigarette company’s CEO was replaced by K.C. Crosthwaite, an Altria executive. These changes left employees concerned and angered with their new relationship with Altria. How can a company whose mission is to provide a safer smoker alternative to combustible cigarettes be associated so closely with Big Tobacco?

While the danger the vaping epidemic presents is dangerous, and the specific targeting of kids seems objectionable, many wonder if the FDA should regulate e-cigarettes quite so heavily. The regulation of the vaping industry is a case of paternalism, where one’s choices are interfered with in order to promote one’s well-being and long-term interests. Some are concerned that the raising of the federal minimum smoking age is an overextension of the government’s authority, especially considering there is lack of evidence that nicotine e-cigarettes cause significant health issues. Similarly, because there are less immediate consequences of teen nicotine use (compared to teen alcohol use for example), such regulations may appear overcautious. There are more practical concerns at play as well; if vape products are banned, teens may be pushed to use combustible cigarettes or illicit vaping products that have been linked to respiratory disease. Although some are concerned about the restriction of personal choice, others view such laws as similar to mandatory seatbelt and compulsory child education laws.

Issues of classism and racism are rooted in the e-cigarette industry as they were in the tobacco industry. Because a large amount of stigma surrounds combustible cigarettes in the United States, smoking cigarettes is especially frowned upon by the middle class, and the habit is associated with those of a lower socioeconomic class according to British economist Roger Bate. Middle-class, adult vapers are conditioned to feel ashamed for smoking traditional combustible cigarettes. Similarly, many feel wronged that e-cigarettes are being regulated so heavily when flavored menthol cigarettes, claimed to be more addictive and are most commonly used by African Americans, remain on the market. Tobacco companies’ use of racially targeted marketing tactics of the addictive menthol flavored cigarettes are eerily similar to Juul’s early advertising blitzes, however, it seems that it is only when “young white people [are affected], then action is taken really quickly,” according to LaTroya Hester, spokeswoman for the National African American Tobacco Prevention Network.

Ultimately, any form of governmental intervention will cause debate about which personal liberties warrant being curbed, what our “best interests” are, and who is best positioned to know what those interests actually are. Juul and other e-cigarette companies might be blameworthy, but for many it’s not clear that the government should go to such great lengths to save us from ourselves.