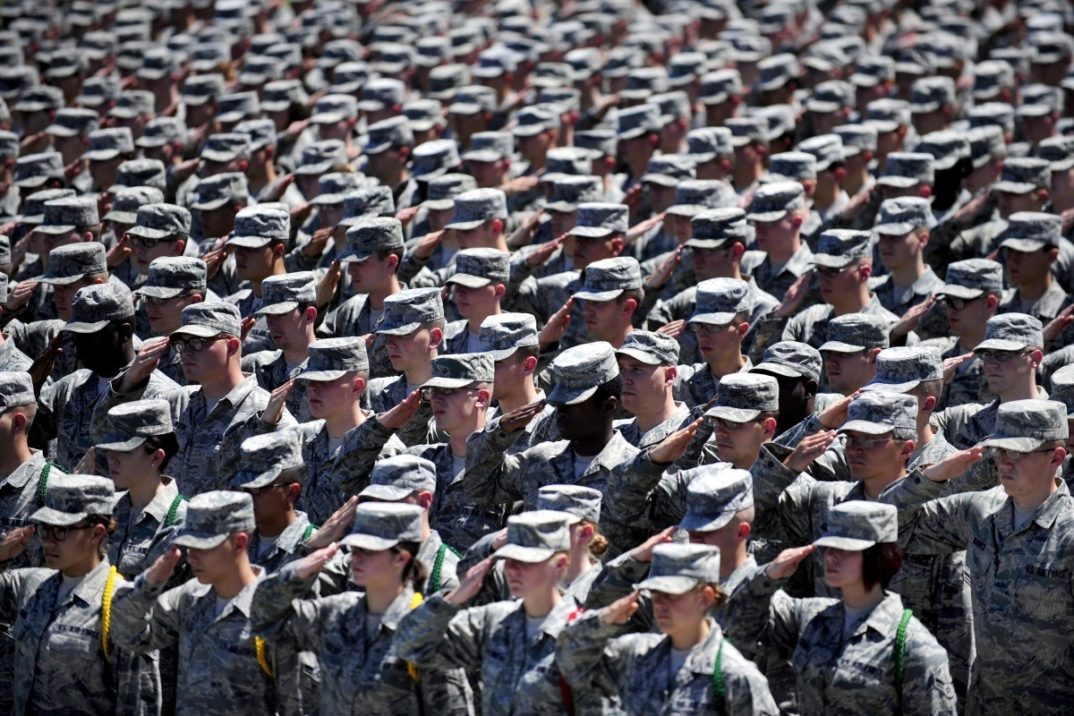 “military soldiers saluting …” is part of the public domain (via PxHere)

On January 3, while at a ceremony for Evangelical Christians in Miami, Donald Trump announced the execution of Iranian General Qasem Soleimani, saying “…he was planning a very major attack and we got him.”

Two days later, multiple news outlets reported that the United States will be deploying roughly 3000 soldiers to the Middle East in response to escalating tensions, with possibly several thousand more to follow.

On Tuesday, several hours before Iran attacked an Iraqi military base housing US troops, U.S. Defense Secretary Mark Esper told CNN that “We are not looking to start a war with Iran, but we are prepared to finish one.”

Although Trump and Esper are clearly referring to groups of people when they say “we” have done (or will do) such things, it is far from clear exactly who they understand to comprise those groups. Is “[the military] prepared to finish a war with Iran” or does Esper mean “[the American people]”?

Similarly, attributing responsibility to collective nouns like “the United States” is vague – what portion of US citizens, for example, made the decision to deploy troops overseas? Clearly, since citizens do not directly vote on either federal or military operations, such a question is confused in several ways. So, perhaps, “the US” should be understood as an abstract concept along the lines of “a nation-state that is different than the sum of its parts” with some individual or sub-group (like “the government”) responsible for making practical decisions.

This is a small example of what philosophers call “The Problem of Collective Responsibility.” Many considerations of the nature of blameworthiness are interested in questions of individual culpability – “what do I deserve as a consequence of my own actions?” However, some philosophers have suggested that collections of agents can be viewed as culpable (or innocent), such as hate groups or terrorist organizations – however, this raises a host of questions. Transferring between group-based blame and individual culpability is tricky (if one soldier commits a war crime, should his entire unit be held responsible for them?). Internal disagreement within a group seems problematic as well (is it right to hold a full group responsible for something if 62% of the less-powerful individuals in the group disagreed with the decision? What if only 43% protested?)

Nevertheless, collective-responsibility models are not without precedent. For centuries, the just war tradition has relied on distinctions between “combatants” and “non-combatants” to codify its rules for jus in bello; consider the statement released on Sunday by Hezbollah threatening all US military agents that also explicitly stated how US civilians should not be targeted.

So, consider the soundbite “We got him” – who is the “we” actually responsible for killing Soleimani? Multiple interpretations of Trump’s term “we” seem possible:

By saying “we” (as opposed to “they”), Trump includes himself in the responsible group, ruling out options 1 and 2. It seems like option 8 could also easily be rejected, but it also seems reasonable to think that Trump was attempting to include his audience in his celebration, at least in part, thereby ruling out options 3, 4, and 5.

If Trump means “[the United States as a collection of citizens] got him” (that is, if he means option 6), then he’s attributing responsibility for Soleimani’s death to millions of people (including children) who have never heard of Soleimani, have never voted, and – in many cases – would explicitly reject such an operation if they had the option to do so. Each of these outcomes seems, at best, odd.

So, at this point, option 7 – the “US as an abstract concept” choice – appears to be the least problematic. Admittedly, this is the sort of tactic we take in other contexts to explain how group identities remain constant over time, even as group membership fluctuates (the 1997 Colorado Rockies and the 2019 Colorado Rockies are, in some sense, the same baseball team, despite no player from the 90s remaining on the roster). But abstract constructs cannot be held morally responsible – only individuals can! If every member of the 1997 Rockies were found to have been using steroids throughout their season, it would be unjust to punish the 2019 Rockies because the individuals are different. If people cannot be blamed in this way, then it seems like they also cannot be praised in this way, leaving Trump’s “we” to be puzzling once more.

Collective responsibility problems are messy and far from intuitively obvious. This point is always useful to remember when listening to representatives of organizations or governments, but it is especially important when war drums are starting to beat.