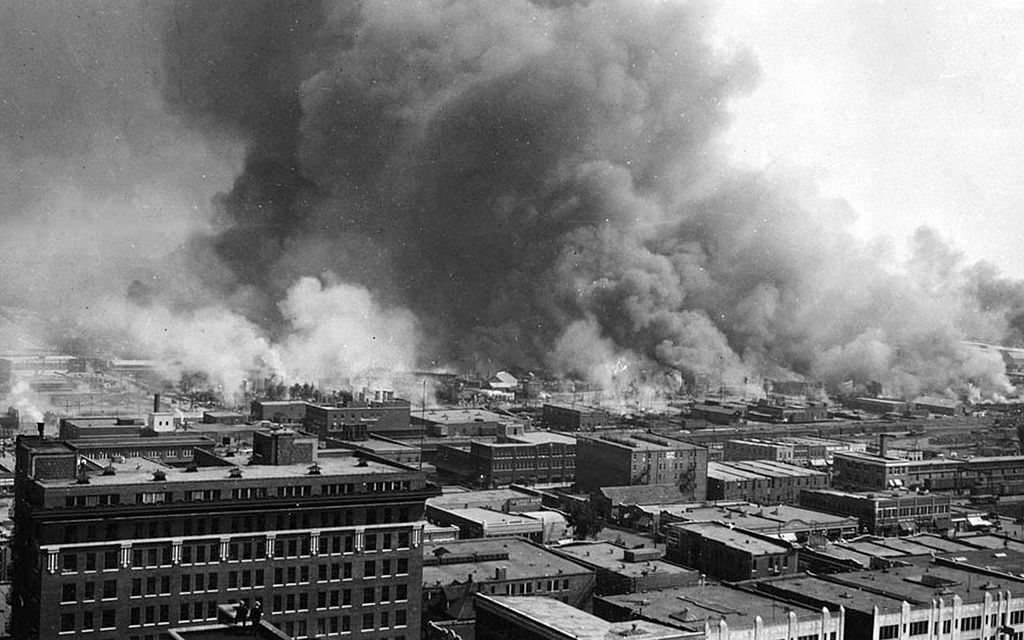 On October 20th, the latest adaptation of Dave Gibbons and Alan Moore’s ground-breaking 1987 graphic novel Watchmen premiered on HBO; its opening scene featured the Tulsa Race Massacre, potentially “the single worst incident of racial violence in American history,” where thousands of buildings were burned and hundreds of black Oklahomans murdered in the Spring of 1921. Also known as the Black Wall Street Massacre, it was sparked when tensions escalated after a local black shoeshiner was accused of accosting a white elevator operator; because there was talk of an impending lynching, the black community protested, leading to an exchange of gunfire.

For many HBO viewers, the most surprising thing about the scene was not its graphic violence, but the later realization that the Massacre was, indeed, a historical event – an especially bloody episode in American history which, by and large, goes undiscussed in American schools.

Consider now the message that President Donald Trump, embroiled within an impeachment inquiry about multiple cases of corruption and misconduct, tweeted on October 22nd:

“So some day, if a Democrat becomes President and the Republicans win the House, even by a tiny margin, they can impeach the President, without due process or fairness or any legal rights. All Republicans must remember what they are witnessing here – a lynching. But we will WIN!”

Immediately, Trump was criticized for comparing the constitutionally-outlined impeachment process to the lawless brutality of lynching, a form of domestic terrorism almost exclusively used to reinforce racist oppression throughout the country by torturing and murdering black men. For anyone to draw (or defend) such an analogy requires, at best, an embarrassing level of ignorance or insensitivity about the actual history of racial abuse in the United States.

In different ways, both of these cases evidence what Ta-Nehisi Coates has called “patriotism à la carte” – a selective awareness of our national history that highlights certain favorable elements (or, at least, elements favorable to a particular subset of Americans) while quietly ignoring others. To Coates, such an approach to history is dishonest and, when it prevents some groups of Americans from being able to fully understand and engage with their current social situation, oppressive. Rather than cherry-pick the stories which we collectively magnify into cultural icons, Coates argues that an honest treatment of history will include multiple perspectives – even, and especially, if some perspectives emphasize that the U.S.A. (and its heroes) has not always been heroic for everyone: “If Thomas Jefferson’s genius matters, then so does his taking of Sally Hemings’s body. If George Washington crossing the Delaware matters, so must his ruthless pursuit of the runagate Oney Judge.”

Furthermore, both the general ignorance about Black Wall Street and the specific ignorance about the cruelty of lynching demonstrate various forms of what Kristie Dotson, professor of philosophy at Michigan State University, has dubbed “third-order epistemic injustice” or, more simply, “contributory injustice.” In general, epistemic injustice relates to the ethical implications of how society mistreats knowledge claims from various parties. If a woman accuses a man of sexual assault, but her testimony is, as a matter of principle, treated with skepticism, then she may be the victim of first-order epistemic injustice, often called “testimonial injustice,” because her testimony is unjustly discredited. Cases of second-order injustice – also known as hermeneutical injustice – result when a person is not only unable to communicate their experiences, but is prevented from even privately conceptualizing their own experiences, such as in the case of harassment or assault victims prior to the coinage of terms like “sexual harassment,” “date rape,” or “marital rape.”

Contributory, or third-order, epistemic injustice comes about as a matter of what Dotson calls “situated ignorance” which prevents the voices of marginalized groups from contributing to the wider cultural conversation. By “maintaining and utilizing structurally prejudiced hermeneutical resources,” perpetrators of contributory injustice define what “counts” as “real” history; the fact that audience members of HBO’s Watchmen were surprised to learn about the violent mistreatment of the actual residents of Greenwood, Oklahoma may well stem from the systemic “à la carte” approach to America’s racial history that Coates decried. Importantly, those guilty of maintaining dominant perspectives may not consciously realize that they are silencing marginalized groups, but – whether such actions are intentional or not – such silencing remains and, therefore, remains a problem.

And when Donald Trump or others try to dilute the severity of America’s racist past by comparing professional accountability (and potential prosecution for legitimate crimes) to the painful history of the illegal and immoral lynching of innocent people, this also evidences Dotson’s concern to highlight the role that social power plays in maintaining the process of contributory injustice. As she points out, hermeneutical injustice entails that both a speaker and an audience are unable to understand the thing in question; in a case of contributory injustice, the marginalized group can fully conceptualize their own experience, but differential social positions prevent the confused people in power from attending to the less-powerful perspective – it is a lopsided confusion propped up by the ignorance of the powerful.

Interest in philosophical considerations of epistemic injustice, and the wider field of “social epistemology” as a whole, is growing; it remains to be seen just how long it might take for its insights to substantively contribute to the broader public conversation.