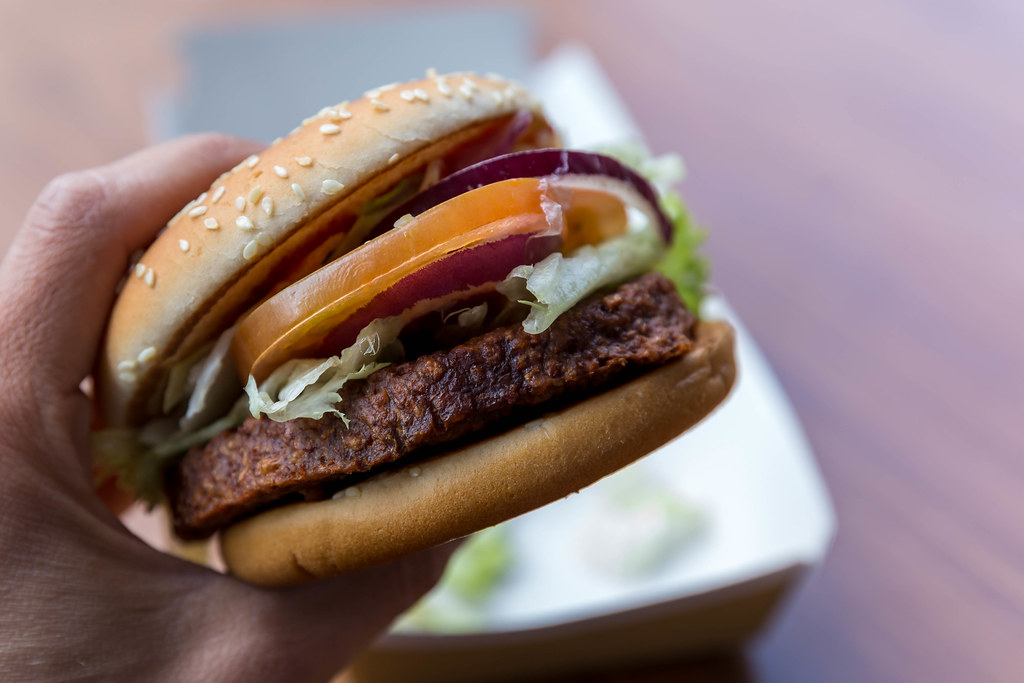 “Close-up of a hand holding the new Big Vegan TS McDonalds Burger in Germany, with soy patty, tomato slices, mustard sauce and Lollo Bionda salad” by Marco Verch is licensed under CC BY 2.0 (via Flickr)

2019 has been a good year for plant-based meat replacements. In January, Carl’s Junior launched their Beyond Famous Star Burger, made with the plant-based Beyond Meat. The Mexican food franchise Del Taco launched tacos made with Beyond Meat at all of their franchises in April. The introduction of the vegan alternative has been a smash success, leading the company to release two additional products made with Beyond Meat to their menu in June of this year. Many other restaurants have recognized the consumer interest in meat-free options. Restaurants such as Burger King, White Castle, A&W, and Red Robin offer products made with Impossible burger, a plant-based competitor to Beyond Meat.

Now, one might respond, “but haven’t plant based alternatives existed for quite some time?” After all, most people can’t remember a time when they haven’t been able to purchase a veggie patty from their local supermarket. These alternatives are different. They have been designed, not simply to provide a substitute for meat, but to provide an option that is so similar to beef in taste and texture that few consumers are able to tell the difference.

By May of this year, Impossible raised 300 million dollars in Series E funding, generating investments from individuals like Jay-Z, Serena Williams, Alexis Ohanian, Katy Perry, and Jaden Smith. When Beyond Meat went public in May, it was, according to Business Insider, “the best performing first-day IPO in nearly two decades.”

Environmental considerations matter for our futures and for the futures of our children. They also matter for all of the other species of living beings on earth. But movement away from meat is important for reasons beyond impacts on the environment. We have a direct obligation to the animals being consumed. Given the fact that it isn’t necessary for humans to consume flesh to survive, many believe that animals ought not be made to sacrifice their lives because we enjoy how their dead bodies taste. What we should be striving for, as philosopher Tom Regan elegantly put it, is “Not larger cages, empty cages.”

Even those who aren’t sympathetic to that argument might be sympathetic to arguments related to animal welfare. One might think that it isn’t wrong to kill animals for food, so long as those animals are treated humanely and killed painlessly. The fact of the matter is that this simply isn’t the reality of how the meat for our tables is produced. Most meat is produced in factory farms. In these places, animals are treated as things rather than as living beings. They are treated as products to be mass produced rather than as creatures capable of experiencing a wide range of sensations including pleasure, pain, anxiety, and grief. Conditions in these places are appalling—animals are given very little room to move around, they experience existences of perpetual anxiety and pain, and there are no steps to see to it that these beings live their lives in a way that would constitute flourishing for members of their species. The appearance on the market of plant-based alternatives that taste so similar to meat that many tasters can’t tell the difference is truly a remarkable achievement. We have the power to ameliorate all of this suffering and death and still satisfy carnivorous palates.

The fact that meat substitutes are doing so well is big news. Predictably, in the current click-bait news climate, eye-catching headlines and sensationalist news stories are easy to find, and they spread across social media like a virus. Among other things, many news articles raise concerns about the nutritional value of substitutes like Beyond Meat and Impossible meat. All one needs to do is search for news stories about the nutritional value of a given meat substitute to find plenty of noteworthy examples. Consider the story Are Beyond Meat and Impossible Burgers Better for You? Nutritionists Weigh In, published in the Huffington Post on July 10th, 2019. The first concern that the nutritionist lists in the article has to do with protein. The protein content in these products is high—Beyond Burger contains 20 grams of protein and Impossible contains 19 grams. The levels are actually higher than the protein content one finds in ground beef with the recommended 20% fat. It can’t be, then, that these meat replacements don’t contain enough protein. Instead, the nutritionist’s complaint is that the proteins are processed. She expresses her concern, “The problem with a lot of additives is that we just don’t know the long-term effects of them, whereas a beef burger could just be one ingredient: beef.” She makes it clear, of course, that the problem with these products is not in average consumption, but in overconsumption. The average reader is likely left with the impression that we simply don’t know whether the contents of these products are healthy or not. A common takeaway, therefore, may be that, because we might not know the long-term effects of processed plant products, we should stick with tried and true beef. What she fails to point out in the article is that there are things about overconsumption of red meat that we do know—such consumption has been linked to both cancer and heart disease. Heart disease is the leading cause of death in the United States.

The nutritionist also raises concern about the amount of sodium in these meat replacement products—the Beyond Burger has 390 milligrams of sodium and Impossible has 370. This is, granted, much more sodium than is contained in beef. That said, these sodium levels aren’t, all things considered, high. The American Heart Association recommends no more than 2,300 milligrams of sodium per day and suggests that people average around 1,500 milligrams. Use of one of these meat alternatives as the main source of protein in a meal is certainly compatible with satisfying these recommendations.

The style of reporting in these stories is familiar—it is designed to raise concerns in the reader’s mind about the nutritional value of these products for the purposes of increased readership. In the end, the concerns, though presented as serious, are completely innocuous. Reporting on topics of consumption of all types is frequently this way. Consumption is a big part of life. Arguably, one of the most difficult aspects of living is achieving a healthy balance when it comes to consumption. Many people turn to the Internet to help them navigate the rocky terrain. When the stakes are this high, reporters shouldn’t scare consumers away with misplaced concerns about nutrition.