Should We Mute Michael Jackson?

By Alfred Archer and Benjamin Matheson 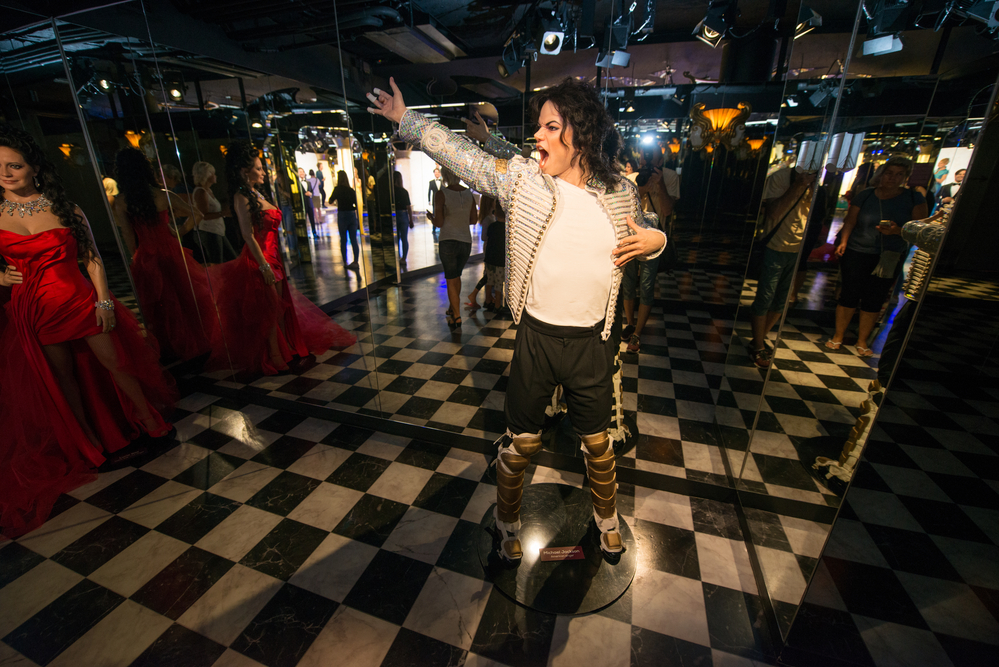 “Michael Jackson in Grevin museum of the wax figures in Prague.” by Pe3check (via depositphotos)

rThe documentary Leaving Neverland features first-personal accounts from Wade Robson and James Safechuck of child sexual abuse allegedly committed by “The King of Pop,” Michael Jackson. This is not the first time Jackson has been the subject of such allegations. But the renewed attention to these allegations, combined with the fact that movements such as #metoo, #timesup, and #muterkelly have heightened awareness of sexual harassment and sexual assault in the entertainment industry, has raised new questions about how we should respond to Jackson’s music. Should radio stations still play it? Should streaming services take it down? Should we listen to it in private? In short, should we mute Michael Jackson because of his alleged immorality?

Many seem to be in favor of muting. A number of radio stations in Australia, Canada, New Zealand, and the Netherlands have decided to stop playing his music (at least temporarily). Along with this limited radio suspension, many have declared on social media that they will no longer play his music, an episode of The Simpsons featuring Michael Jackson has been withdrawn, and Drake has removed Don’t Matter to Me, featuring Jackson’s vocals, from his tour setlist.

Others, however, have been less keen to “mute” Michael Jackson. The director of Leaving Neverland, Dan Reed, said that, “It seems to have had an effect on people who have watched the film, the reaction I’ve heard most often is that people don’t want to hear his music. But it’s a personal thing. I wouldn’t get behind a campaign to ban his music, I don’t think that makes any sense.” Greek radio station 95.2 Athens played a Michael Jackson song every hour over a weekend to protest against the documentary. Jackson’s estate have also said that they will sue for damages. And dedicated Michael Jackson fans have even taken to the streets to protest the documentary. Importantly, his fans mostly seem to be asserting his innocence. In their view, because he is not guilty of what he’s been accused, there is no ground to mute his music. But there are good reasons not to play Jackson’s music in the current context that don’t depend on him being guilty.

To see why, consider the case of former Lostprophets’ vocalist Ian Watkins. He is currently serving a 29-year prison sentence for a string of sex crimes, including the attempted rape of a baby. Unlike Jackson, Watkins has been convicted of the allegations made against him. In response, British retailer HMV decided to stop selling their music. His former band mates stopped performing under the name Lostprophets and vowed that their new band would never perform any songs that had been written by Watkins. In such a clear case, there are good reasons not to play his music: for instance, it might cause revulsion as it reminds us of his crimes, it might be disrespectful to his victims and the victims of similar crimes, and it might appear that we are willing to overlook his horrific actions so that we can continue to enjoy his music.

These reasons may appear to depend on Watkins’s guilt. However, overlooking someone’s horrific actions is just one way that we might support someone. It is also possible to support the “merely” accused against allegations. For instance, playing Michael Jackson’s music at this time may send the message that we support him against these allegations. Sometimes this is exactly the message people intend to send. This indeed is the reason New Zealand café owner Kalee Haakma gives for why she now dedicates each Monday to playing only Michael Jackson’s songs, saying: “There is evidence out there that supports his innocence.” Here Haakma clearly expresses that her reason for playing Jackson’s music is to show her support for him in the face of these allegations.

As we have argued elsewhere, our actions can also have meanings that we do not intend. Consider the recent case of British radio DJ Danny Baker, who was fired from the BBC for sending a tweet depicting the new British royal baby as a chimpanzee. The tweet was taken by many to be making a derogatory comment about the baby’s mixed racial heritage. While it is possible that this was what Baker intended, he claims that he meant to make a comment about social class and the media spectacle surrounding royalty. Even if these were his intentions, comparisons with monkeys have long been used to degrade and abuse black and mixed-race people. Given this, it seems more than reasonable for others to interpret Bakers’ tweet as making a similar comparison. The context of his action means that it conveys a racist message even if this is not the message Baker intended.

In a similar way, at a time when significant allegations have been made against Jackson, playing his music publicly could reasonably be interpreted as an expression of support for him against those allegations. It sends this message in part because the DJ has chosen to play Jackson’s music instead of the vast catalog of other music available when recent, detailed and compelling testimony has been given against Jackson. Prompting us to appreciate Jackson’s talent as a musician at such a time might reasonably be interpreted as expressing support for Jackson. This is especially true at a time when Jackson’s supporters are publicly denying the allegations made against him and responding with vitriol to those making them, such as accusing Safechuck and Robson of lying and being motivated purely by money. It is also relevant that the form this protest often takes is playing and celebrating his work in public.

Of course, there are a number of reasonable ways to interpret this support. It might be interpreted as protest against “political correctness going mad”. It might be interpreted as holding that his music should still be appreciated regardless of his guilt or innocence. It might instead be interpreted as an unqualified defense of the man and a wholesale rejection of the accusations made against him. The final form of support clearly sends a further message that is potentially harmful for victims of sexual abuse, particularly victims of important or talented men. It sends the message that if they decide to go public with their accusations then not only will they not be believed, they will also be publicly vilified. DJs might try to avoid sending a harmful message by being explicit that they do not intend to support Jackson in a way that overlooks the accusations. But it is hard to avoid this harmful message being sent when playing his music given the background context of the entertainment industry’s long history of turning a blind eye to allegations of sexual harassment and abuse made against talented men. Against this background, DJs and radio stations shouldn’t play his music.

Does this mean you shouldn’t listen to Michael Jackson’s music in private? Not necessarily. A large part of the problem with radios playing his music is that it is in public. Whether or not you can continue to enjoy his music in private may come down to your personal relationship to the music, as Blindboy Boatclub from Irish hip hop duo The Rubberbandits argues. You might not feel able to if it reminds you of his crimes, but it may still be acceptable to do so. But you might, as Blindboy does, appreciate Jackson’s music more for Quincy Jones’ production than for Jackson’s lyrics and vocals, making Jackson’s immoral behavior largely irrelevant to your appreciation of the music. It is important to acknowledge that Jackson’s success is not solely down to his own musical talents and that many people contributed to the making of his music and the production of his celebrity status. Perhaps if we acknowledged these contributions as much as we do the stars’ contributions, listening to Michael Jackson’s music now wouldn’t send such a harmful message. But given the reality of a celebrity culture that turns talented musicians into stars who are to be worshiped and not to be challenged, we have good reason, at least for now, to mute musicians when credible accusations of seriously immoral conduct are made against them.

Alfred Archer is an Assistant Professor of Philosophy at Tilburg University and a member of the Tilburg Center for Logic, Ethics, and Philosophy of Science. His primary research interests are in moral philosophy and moral psychology, particularly supererogation, the nature and ethics of admiration, and the ethics of fame. -- Benjamin Matheson is a Postdoctoral Fellow in Practical Philosophy with the Stockholm Centre for the Ethics of War and Peace at Stockholm University. He has research interests in ethics, metaphysics, moral psychology, philosophy of religion, philosophy of emotions, and social and political philosophy.
View All Articles By Alfred Archer and Benjamin Matheson
Related Stories