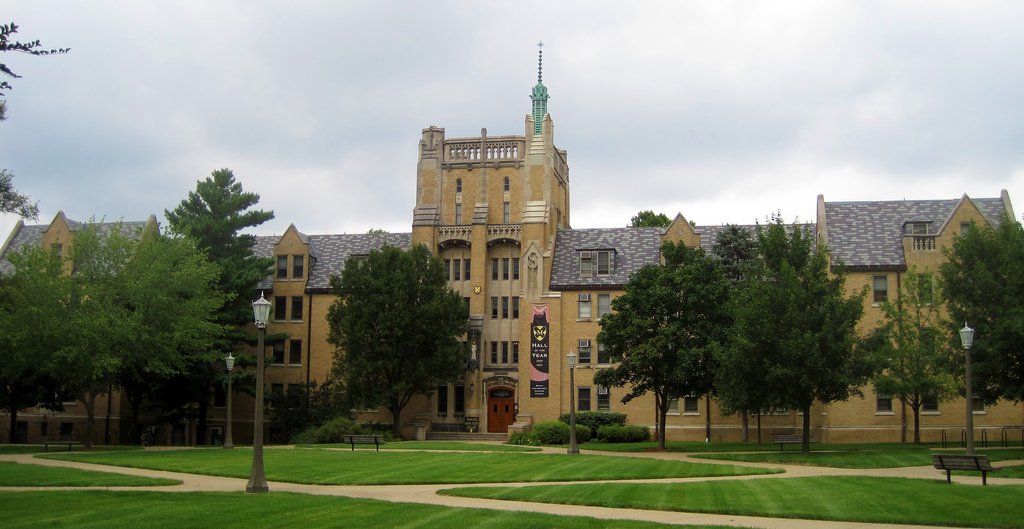 On Monday, March 25th, The University of Notre Dame’s student-run newspaper The Observer printed a letter to the editor from Maryann White, the self-described mother of four sons who recently visited the Indiana campus, titled “The legging problem.” The note scolded the university’s student body for its attire, specifically criticizing the prevalence of form-fitting clothing. More specifically, the letter chastised the female students of Notre Dame for their clothing choices and suggested that women who wear leggings as pants are unavoidably leading men to ogle their bodies. As White explained, she was simply concerned “For the Catholic mothers who want to find a blanket to lovingly cover your nakedness and protect you — and to find scarves to tie over the eyes of their sons to protect them from you!”

In addition to a variety of published responses (appearing in venues ranging from CNN to the Washington Post, to the Today Show) more than a thousand students responded to a Facebook event organized by the Irish 4 Reproductive Health club, an on-campus organization promoting reproductive justice and access to sexual health resources, indicating their intent to wear leggings to class last week as a demonstration against White’s misogyny. The Observer indicated that, in addition to the much-publicized controversy online, their offices received several dozen additional letters in response to the article, several of which they also published.

To be sure, there are many who might balk at my application of the word ‘misogyny’ to this story (“after all, isn’t ‘Maryann White,’ herself, a woman?”), but the term has benefited from an enriched treatment in recent philosophical work and is fitting, given White’s expectation that women at Notre Dame shoulder the burden of warding off the male gaze. (NOTE: the latent heteronormativity of White’s initial letter is also worth critiquing, but that’s an issue for another article.)

In her recent book Down Girl: The Logic of Misogyny, Cornell philosophy professor Kate Manne explains that misogyny is more than just an emotional hatred of a particular gender, but is instead, “primarily a property of social environments in which women are liable to encounter hostility due to the enforcement and policing of patriarchal norms and expectations” (19). On this view, misogyny can be entirely emotionless (and even not directly intentional), but still misogynistic if it continues to promote sexist ways of life; as Trent University professor Kathryn J. Norlock put it in her review of Manne’s book, “If sexism offers planks, misogyny provides the nails.”

Imagine instead if Maryann White had witnessed a mugging during her campus visit, then wrote a letter chastising students for not taking self-defense classes – anyone reading that newspaper would rightly complain that White had misplaced the blame for the crime onto the victim, rather than the perpetrator. Even though her theoretical argument (that “if people aren’t ready to defend themselves, then they can’t be surprised when they’re attacked”) might not be, itself, a mugging, it nevertheless functions to create a context which helps muggers to mug by shifting the blame for the problem onto the victims. In reality, the only person at fault in a mugging is the mugger; so, too, with ogling or any other kind of sexual assault.

Down Girl is perhaps most famous for coining the term ‘himpathy,’ what Manne calls the “often overlooked mirror image of misogyny” evidenced by “the excessive sympathy shown towards male perpetrators of sexual violence” (197). If White’s desire to patronizingly cover unknown women with blankets to protect their modesty is strangely misogynistic, then her felt need to find scarves to restrain her own sons is similarly problematic. Both actions assume that the sexualization of innocent women’s bodies is suffered mainly by the men doing the sexualizing, not the women being objectified.

Of course, White’s expectations about women’s responsibilities (and men’s lack thereof) is far from unusual, particularly in an American religious context; in Linda Kay Klein’s book Pure: Inside the Evangelical Movement that Shamed a Generation of Young Women and How I Broke Free, she deconstructs what she calls the ‘purity culture’ that grew alongside American evangelical Christianity following the post-1980s ascendency of the Religious Right. In particular, Klein explores (primarily through interviews buttressed by research) how particular teachings about sexuality and gender, and particular interpretations of biblical passages (that see sexuality as a ‘stumbling block’ for one’s pre-marital ‘purity’) have led women, in particular, to feel burdened with guilt; as Klein explained of her own experience, “Intended to make me more ‘pure,’ all this message did was make me more ashamed of my inevitable ‘impurities’” (33).

So, the sentiment expressed in Maryann White’s letter is far from uncommon and, as Monica Hesse of the Washington Post put it, that’s the real conversation this letter should provoke. Far more concerning than the specific worries of one mother is the culture-wide phenomena of misogyny critiqued by thinkers like Manne and Klein.