Questioning the Morality of Raising Neanderthal 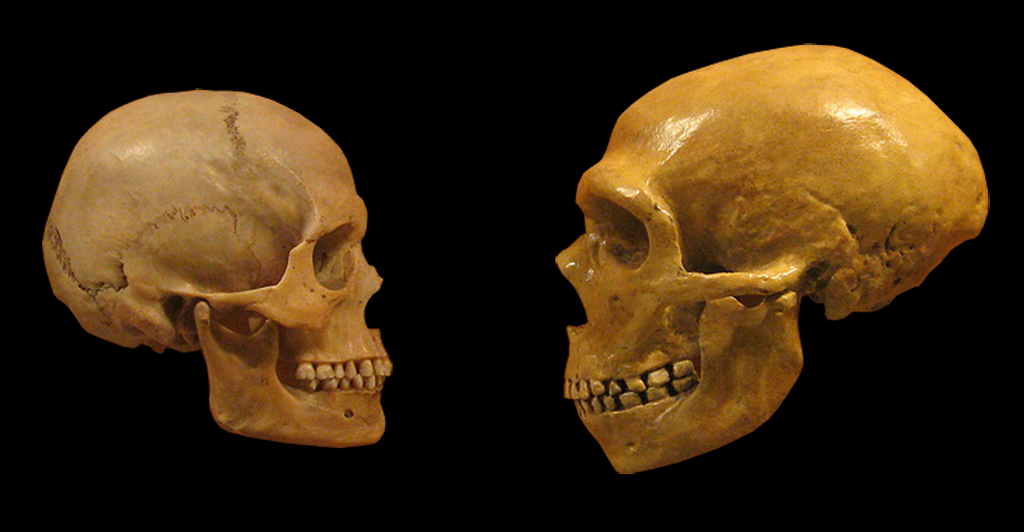 “Sapiens Neanderthal Comparison” by Chriswick Chap is licensed under CC BY 2.0 (via Wikimedia Commons)

In 2013, Harvard professor George Church raised the possibility that an “extremely adventurous female human” might one day serve as a surrogate mother to a cloned Neanderthal child. In the recent bestseller Sapiens, author and historian Yuval Noah Harari discusses the possibility of resurrecting Neanderthal, reintroducing the idea into popular discussion. Bringing Neanderthal back to life would be an instance of what many scientists call de-extinction. The idea that something like this may be possible is certainly both intriguing and entertaining. But, to paraphrase Jurassic Park, when it comes to using emerging technology in this way, are people spending so much time thinking about whether they could that they haven’t stopped to consider whether they should?

One argument in favor of using the technology is an argument for a kind of reparations paid to other species for our history of destructive, parasitic behavior. Many historians believe that homo sapiens were likely largely responsible for the extinction of Neanderthal. The answer to the question of whether we ought to resurrect our long lost cousins is a species of a larger question pertaining to human obligation. It is undeniable that homo sapiens have been among the planets most destructive animals—we are responsible for the extinction of a startling number of species. As genetic technology progresses, do humans have an obligation to revive the species they’ve wiped out? How many species ought we to resurrect? All of them? Only some of them? How should we decide? Should we only revive the species that continue to exist in collective memory? Do we have an obligation to revive long lost species?

Is biodiversity good in itself, regardless of what it brings about? If so, perhaps the more species we revive the better? Should we instead focus on the potential consequences of bringing a species back to life? If so, consequences for whom? If it was anthropocentrism that took the species out in the first place, and if we take ourselves to have moral obligations to bring species back into existence, we probably shouldn’t appeal to anthropocentric considerations in our arguments for which species, if any, to bring back.

Many of those interested in reviving extinct species are not motivated by ethical considerations. Instead, they want to test the limits of what is scientifically possible. This raises a distinct set of ethical questions. Many argue that knowledge is intrinsically valuable. If this is the case, perhaps we ought to maximize the things that we know. This would include knowledge of how to revive lost species and of what would happen if we did. It may well be, however, that not everything that is, in principle, knowable, is something that should be known. Perhaps we need to put some checks on what we do with emerging technologies.

Some raise ethical concerns with the cloning of Neanderthal in particular. The history of western thought is replete with examples of philosophers extolling the virtues of human reason. Neanderthals, if revived, would share many of the same reasoning capabilities as humans. Is it morally defensible to intentionally create creatures that share features in common with humans, but whom we know will be significantly less intelligent?

As it is, homo sapiens aren’t great at reasoning about species membership.  We tend to treat the suffering of animals like cats and dogs very seriously, while ignoring the suffering of others, especially those that we are accustomed to using for food. In what ways should we expect humans to treat Neanderthals? Would homo sapiens treat differences in species membership as if it justified differences in moral treatment? Neanderthals would surely be intelligent enough to include in the category of persons. Would homo sapiens be disinclined to treat them with the dignity that membership in the moral community carries?

Objections to reviving Neanderthals tend to rest on the idea that the species is very similar to our own, but less intelligent. Interestingly, intelligence doesn’t seem to be a factor in the arguments for or against bringing other species back from extinction. When scientists consider reviving, for example, a woolly mammoth, they aren’t worried about whether the resulting creatures will be too smart or not smart enough. Is it simply that we are concerned about creating intelligent beings that resemble us too closely? Could that possibly be a morally relevant consideration?

Another objection to the whole enterprise has to do with the fact that the planet faces overpopulation and resource depletion already. Do we really want to introduce new beings into a situation like that? Would doing so make matters worse for the beings that already exist?

Other arguments have to do with the scope of the project. Arguably, it is cruel to create a member of a species without creating others with which that being can interact. We know that, like humans, Neanderthals were social animals. A crucial part of living a flourishing life for a Neanderthal would be the ability to interact feely with other Neanderthals. If our experiment doesn’t allow for that possibility, it is probably best to refrain from engaging in it at all.

Finally, were this experiment to ever take place, researchers would need to be very careful. Specific family relationships would likely matter to Neanderthals in very similar ways to the ways in which they matter to humans. These beings wouldn’t be reducible to an experiment.

Admittedly, this scenario is farfetched, but it is more than just sci-fi.  In 2003, scientists brought back the previously extinct Pyrenean ibex, only to watch it die shortly after birth.