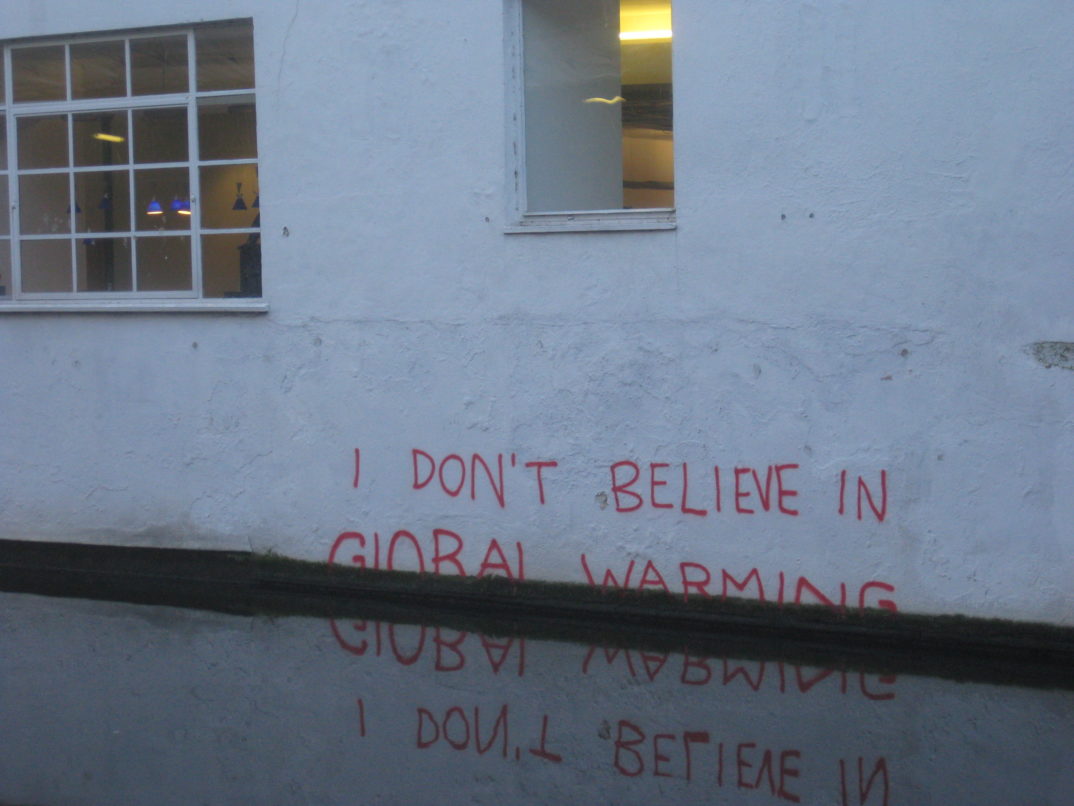 Rising temperatures, acidifying oceans, melting ice caps, and heightened levels of greenhouse gases are all familiar phrases when discussing climate change. Unfortunately, so are controversy, political debate, partisan animosity, and climate change deniers. Tensions are so high on both sides that many of us are left wondering when science became a partisan issue, and moreover one which causes individuals on both sides to engage in debates which result in little to no consensus.

Three weeks into September 2018, the Trump administration repealed a regulation which controlled the release of methane (one of the most powerful greenhouse gases) into the atmosphere from oil and gas operations. As the fourth environmental rollback this year, the Trump administration is sending a clear message about America’s current involvement in addressing the threat of global warming. As scientists urgently express their research-backed concerns for the health of our planet, conservative lawmakers push back with statements that describe climate science using words similar to those of Representative Lamar Smith, who addressed the global consensus on global warming as “exaggerations, personal agendas, and questionable predictions.” The moral quandary arises when considering whether or not the media should be permitted to selectively ignore the perspective of climate change deniers, due to their lack of “legitimate” evidence. Also, what can be said of the fact that although the majority of climate change deniers adhere to republican principles, the entire party is often portrayed as not believing that global warming exists? Lastly, how should lay individuals hold a constructive discussion with climate change deniers on the importance of environmental policies?

The censorship of climate change deniers is a widely debated issue addressed in an article published in the LA times by Steve Lopez. In it, Lopez discussed the fact that many individuals refuse to admit how the record-breaking hot temperatures in California throughout the summer of 2018 are a result of global warming. He points out a specific example from a reader named Joe who responded “You see, Steve, what you call global warming, we call summer,” after Lopez discussed the facts that climate scientists had presented to him regarding the documentation of intense heat for longer periods of time, and the doubling of atmospheric carbon dioxide levels. The reader refuted his evidence saying it was “crap” that can’t stand up to “REAL SCIENTIFIC SCRUTINY.”

After the publication of this article Mary Byrd wrote to the editor about why she believes that climate change deniers are not worth news coverage. Bryd states, “Steve Lopez writes effectively about climate change. But I have a question: Why does he feel he must give any ink, screen space or time to the deniers? These people make no valid arguments; there is no need to counter them. It’s time just to stop covering them.” Byrd’s point is also echoed by Richard Black, an opinion writer for The Guardian who discussed the backlash BBC news received for not challenging incorrect statements made in reference to the credibility of climate change research. As an apology, BBC set up a course on how to report on climate change by addressing the research, evidence, and its common misconceptions. After considering the possible negative outcomes of BBC airing this interview with Nigel Lawson, which contained vastly incorrect assumptions about climate change, it is understandable that when reporting on this often misunderstood topic, climate change deniers should not be given the same platform as researchers with data to back up their claims, or at least the deniers views should not go unchallenged during a 40 minute news segment.

The Republican Party’s relationship with the denial of climate science has been a relatively recent development according to a study conducted at the end of 2017, which was published in the Journal of Climate Change. The results depict that the average percentage of Republicans in every congressional district across America who believe that climate change is caused by mostly human activities is 31%, while almost half believe that it is due to “natural changes in the environment.” This data is alarming, when considering the scarce number of Republicans who acknowledge the true cause of climate change as legitimate. In fact, Riley Dunlap, who teaches environmental sociology at Oklahoma State University, says that “Being skeptical about global warming has become part of Republican or conservative identity.”

However, more recent research published in July of 2018 presents a different picture of these disagreements. Scientists at UC Santa Barbara and the University of Colorado, Boulder found that Republicans and Democrats largely agree on climate change, but are too blinded by party affiliation to notice. Shelly Leachmen of the University of Santa Barbara states, that after surveying 2,200 adults across party lines, “there is general agreement that climate change is real, that it is caused by human activity and that something should be done to mitigate it.” Even more interestingly, the study reveals that “people are more likely to support the same climate policy proposal when they think that their own political party supports it — and that both Democrats and Republicans overestimate how much their peers oppose the ideas of the other party.” This study displays an over-exaggeration of Republican refusal to accept evidence for climate change, and suggests that the reason many individuals fail to endorse environmental policies may be due to political mimicry rather than true scientific denial.

Lastly, conversations about climate change, both in casual environments and political stages, have hardly been fruitful. One is much more likely to get televised debates where each side refuses to hear out the other. Determining a constructive method of listening to climate change deniers and also pointing out flaws in their reasoning, is a crucial skill for not just political candidates but also lay individuals who wish to make family less hostile around the holiday table. Ted Talk outlines a list of strategies to use when talking to people who don’t believe climate change is real, the most important being talking about what worries you about climate change and refraining from using decisive phrases such as, “What is wrong with you?” or “Why can’t you just accept this?”  Daniel Peterschmidt of the blog Science Friday also brings up an important point of making climate change more relevant to people’s lives in these conversations. Additionally, appealing to universal core values such as taking care of the planet while addressing the economic benefits of sustainable energy sources are great approaches.

Clearly, one well-versed conversation cannot change the minds of climate change deniers. However, it does have the potential to open up doors of scientific acceptance, and a preference for initiatives that make this planet a better place to live, eventually creating a society where political parties don’t disagree over whether or not to protect our shared planet.