Questions on the Ethics of Triage, Posed by a Sub-Saharan Ant 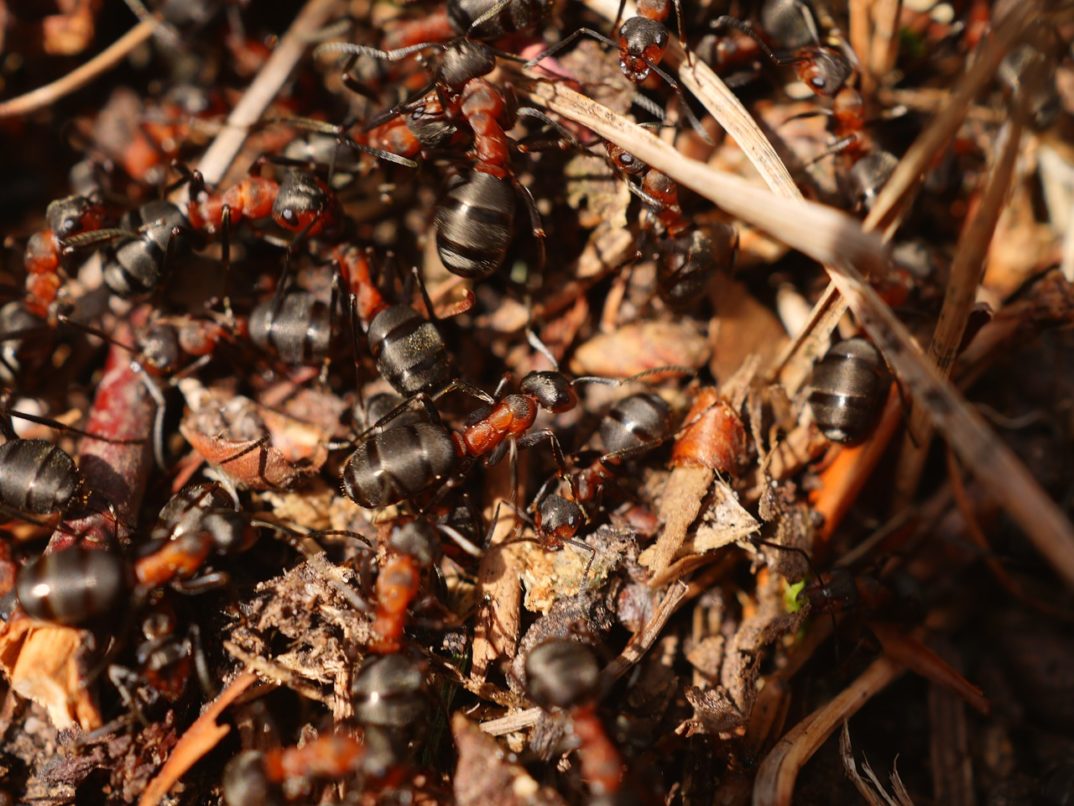 “Ants” by MonikaP is licensed under CC0 Public Domain (via Pixabay)

In a new study published in Proceedings of the Royal Society B, behavioral ecologist Erik Frank at the University of Lausanne in Switzerland and his colleagues discuss their findings that a species of sub-Saharan ants bring their wounded hive-mates back to the colony after a termite hunt. This practice of not leaving wounded ants behind is noteworthy on its own, but Frank and fellow behavioral ecologists note that the Matabele ants (Megaponera analis) engage in triage judgments to determine which injured ants are worth or possible to save–not all living wounded are brought back to the nest for treatment.

The Matabele ants go on three to four termite hunts a day and have relatively small colony sizes of 1,000-2,000 ants, so treating the fallen hunters is a good strategy. The adult hunter members of the colony bring the slightly wounded ants back to the nest while leaving behind the severely injured. The distinctions between the slightly versus severely injured are intriguing–ants suffering the sorts of injuries that they can endure and still perform the necessary colony functions emit a pheromone Frank describes as a “help me” pheromone and are picked up by investigating healthy hunters. Such injuries include missing up to two legs, and these ants cooperate with helpers; those ants that have worse injuries don’t emit the pheromone and though the healthy investigate them, the injured aren’t cooperative–they flail and are left behind.

The behavior of these ants mirrors practices in human medicine from emergency rooms to our own battlefields to the scenes of natural disasters.  When resources are limited, a community does not allocate medical care to members that are likely to die. This is a principle of triage (from French–“to sort”), a process where patient care is prioritized.

After the earthquake in 2010, medical relief efforts in Haiti faced massive disaster conditions with limited resources. These are just the conditions that require principles of triage. Dr. Michael Millin (normally an emergency physician from Johns Hopkins Hospital) was faced with a patient who had end-stage tuberculosis, requiring Millin to decide how to allocate resources. The doctor recalled his thinking about the patient: “He needed a vital resource of oxygen, and we had limited supplies of oxygen in our tent. And we also had a number of patients coming to the tent with potentially reversible diseases requiring oxygen, such as exacerbation of asthma from all the dust flying around.” The patients with asthma would get more benefit from the oxygen, and the patient with end-stage tuberculosis was faced with being denied the resource that would continue his life.

The principles of triage are utilitarian–they aim at providing the greatest good to the greatest number of people, under the assumption that there are limited resources. The question at play that is most thorny in situations of limited resources is, “Who gets the most attention or resources? Those who would most likely die without them or those who would live the longest with them?” Ideally, we could take heroic measures and invest time and resources to those who are in dire circumstances (who are most likely to die). However, if putting a large amount of time and energy into a few dire-circumstanced individuals costs many individuals any chance of survival, standards of triage suggest that this is not the best way to distribute goods. In the Haiti case, these questions came together in making the decision to give the asthma patients the oxygen–both patients would die without the treatment, but the asthma case would live longer with the oxygen.

In pursuing the utilitarian standard in human communities, other values come in, as well. Consider the policies surrounding allocating organs transplants to those in need. On average, 18 people die every day in the US while waiting for an organ to become available, and one-third of those in need of a transplant in Canada never receive one. These situations are cases of limited resources, and medical triage principles have been developed to determine how to allocate the organs that do become available. Currently, the criteria for eligibility and priority for receiving a transplant in the US can include your citizenship status, income, and how likely you are to follow doctor’s orders.

Individual transplant clinics can set age limits for donors; for instance, in 2013, the Cleveland Clinic had no age limit for their heart and lung transplants, while the University of Michigan had them capped at 65. Older patients face higher mortality rates, so the age limit is typically justified on the utilitarian grounds that when facing such a shortage of available organs, providing them to the patients with the best chance of survival follows the same principles at work in the natural disaster and emergency department scenarios. Difference justification would have to be at work with the citizenship status check and income check at play on some local transplant boards. Keeping members alive is often the first step in cultivating a healthy community. When resources are limited, the priorities with which we allocate those resources are revealing of a human community’s values.

Having discovered that Matabele ants take part in this practice of treating their wounded and communicating the degree to which the raiders are capable of healing their wounded fellows, researchers of other species of ants are looking to their current interpretations to consider whether they have missed similar behavior.