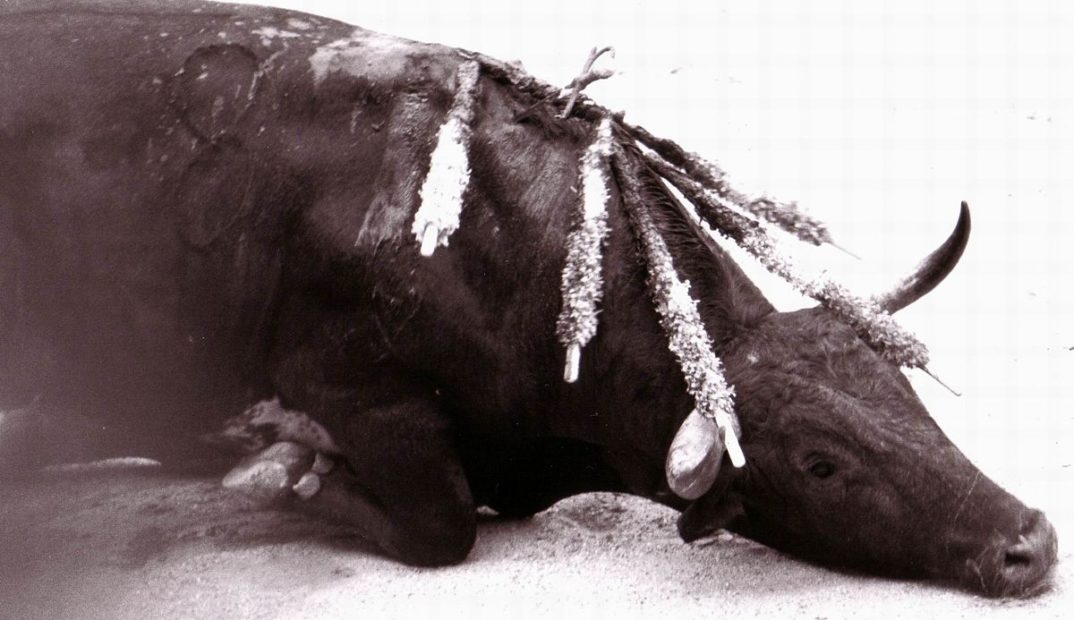 “Bull dying in a bullfight” by CAS-Commonswiki is licensed under CC BY-SA 2.5 (via Wikipedia)

One of Wolff’s recurrent arguments is that bullfighting is not torture because as opposed to what happens in, say, Guantanamo Bay, Cuba, the goal of bullfighting is not to make the victim suffer, but rather, to generate an artistic expression. Bullfighting, according to Wolff, is about entertainment and art, not about the intrinsic suffering of an animal, in the same manner that fishing is about the thrill of catching a fish, not about the pain of the fish itself.

This is not persuasive. If the goal is to entertain and create art with a bull, corridas needn’t be so violent. Indeed, there are bloodless varieties of bullfighting, and crowds seem capable of enjoying them. In traditional bullfights, however, there seems to be a thrill with blood itself (the duplet “blood and sand” to describe the aesthetics of bullfighting is not accidental), and this seems to imply that, indeed, bullfighting is about the intrinsic pleasure of seeing the bull suffer. But, in any case, even if corridas did not have the ultimate goal of inflicting pain on an animal, that is not a sufficient defense. There may be rapists that do not want to harm their victims, they just want to have sex; but it would be morally monstrous to defend such rapists.

The bottom line of the debate about bullfighting is whether or not we have a right to inflict pain and kill animals. Wolff claims we do have that right because in fact, many animals need to kill others to survive. He is right about that fact. Yet, in the case of human beings, there is still debate about whether meat consumption is a biological necessity for us. Be that as it may, for the sake of argument we may agree that, indeed, we have a right to kill other animals. But, we must ask: for what? If the goal is to get proteins, then yes, maybe killing bulls is morally acceptable. If, somehow, bulls are apt for valuable experiments, then again, maybe killing them for the benefit of humanity will be acceptable. But, if killing bulls only serves the purpose of entertainment, then its moral justifications are dubious. Wolff claims that bulls of corridas are edible, and as such, bullfighting serves human nutritional needs, but many nutritionists agree that the meat of bulls after corridas is not very nutritive and is high in acid because during the fight, the bull is too weakened and stressed.

At any rate, Wolff points out an undisputed fact: the conditions of industrial slaughterhouses are not better than the conditions of the bullring during corridas. Charitably, we may even quote renowned philosopher Peter Singer in support of Wolff’s point: “To protest about bullfighting in Spain … while continuing to eat… veal from calves who have been deprived of their mothers, their proper diet, and the freedom to lie down with their legs extended, is like denouncing apartheid in South Africa while asking your neighbors not to sell their houses to blacks.” Yet this fact should not support an argument in defense of bullfighting, but rather, it should be used as a critique of the meat industry. Two wrongs do not make a right.

Perhaps Wolff’s most intriguing argument is his claim that ecological activists should defend bullfighting, because this tradition guarantees the preservation of wildernesses, inasmuch as fighting bull breeds need to be raised in extensive terrains. Without bullfighting, bull farms would give way to intensive and industrial agriculture.

Wolff is right to claim that bullfighting does contribute to the preservation of the wilderness. But, he is wrong to think bullfighting is the only way it can be done. Bullfighting’s fan base has been in decline, and it is no longer fully profitable. For that reason, in Spain, bullfighting stands on subsidies. Those subsidies could be redirected towards the preservation of natural parks where bulls roam freely (as they now do), but without having to kill them in a public spectacle.

Wolff also believes that were bullfighting banned, the fighting bull breed would disappear. Fighting bulls would mix with other cattle breeds, and the fighting breed would die out. In that sense, bullfighting protects biodiversity. Again, he is wrong, because governments could step in to protect and subsidize wildernesses as it, in fact, happens with natural parks that host endangered species in many other countries. In those natural parks, fighting bulls could be preserved.

Be that as it may, there is no need to fully subscribe a defense of biodiversity. Preserving species and subspecies is a moral good, but not at all costs. If in order to preserve a breed or subspecies, we must torture members of that breed or subspecies, then there is no moral justification for this. Let us use this simile. Suppose that, in the name of biodiversity, we wish to preserve the genetic stock of members of the Mbuti tribe in Congo. To do so, we imprison them and force them to remain in their forests, so they will not interbreed with other tribes, and thus, their trait of short stature is preserved. Even if this is done in the name of biodiversity, it would be an atrocity. In the same manner, it is morally objectionable to torture animals, with the pretext of preserving their genetic pool.