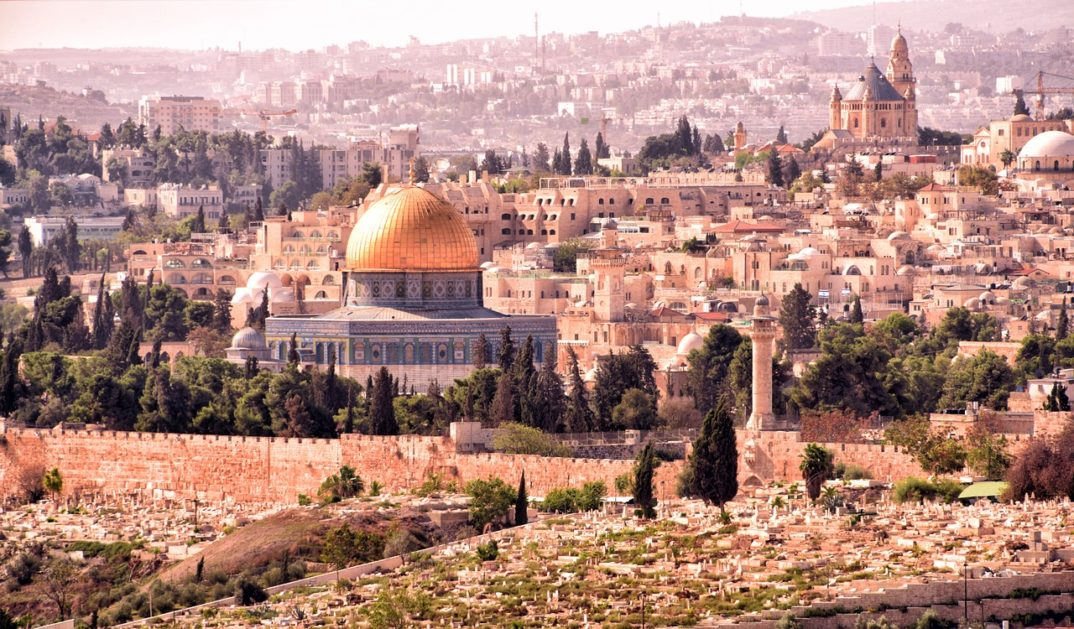 “Jerusalem” by ddouk is licensed under CC0 Public Domain (via Pixabay)

On December 6, 2017, President Trump announced his intention to move the U.S. Embassy in Israel from its current location in Tel Aviv to a new location in Jerusalem.  This move is in accordance with the Jerusalem Embassy Act, passed by Congress in 1995 but waived by every president every year since it was passed. This decision has tremendous political implications, which is why previous presidents, despite conducting much of their business pertaining to Israel in Jerusalem, have refrained from moving the embassy or announcing any formal position on the matter of Jerusalem at all, other than to attempt to advance peace talks between Israel and Palestine.

Jerusalem is, of course, a location of tremendous importance to many of the world’s oldest and largest religions.  Sacred locations and monuments—destinations of devout pilgrimage—are in Jerusalem. Central religious sites to Muslims, Jews, and Christians include the Dome of the Rock, the Al-Aqsa Mosque, the Western Wall, the Temple Mount, the Church of the Holy Sepulchre, and the Tomb of Jesus.  The fact that this region is of such tremendous religious significance means, of course, that many groups care passionately about the region and how the rest of the world perceives it.  Both Israel and Palestine view Jerusalem as their capital.

In light of the significance of the region, the dispute over the land has led to violent conflict, particularly between Jews and Palestinians. In the statement that Trump gave on the issue, he claimed that the move of the embassy and the recognition of Jerusalem as the capital of Israel would further the goal of peace in the region.  He claimed, “I’ve judged this course of action to be in the best interests of the United States of America and the pursuit of peace between Israel and the Palestinians.  This is a long-overdue step to advance the peace process and to work towards a lasting agreement.”  Critics of the policy argue that there is no reason to think that recognition of Jerusalem as the capital of Israel would do anything at all to promote peace in the region—in fact, quite the opposite.

In light of the existence of these religious and cultural traditions, it comes as no surprise that many protests broke out in response to Trump’s announcement.  Palestinians protested the announcement in Jerusalem and were shot with rubber bullets, tear gas, and water cannons by Israeli security forces.  The leader of Hamas said, of Trump’s announcement, “It is a declaration of war against our Palestinian people in their holiest of holy places of the Christians and Muslims.”

Trump’s announcement was not popular with the United Nations.  On December 18, The Security Council voted on a non-binding condemnation of Trump’s announcement and the corresponding embassy move.  The resolution demanded that the declaration be rescinded.  The United States exercised its power to veto the resolution.  The Trump administration indicated that they would be taking note—countries that voted in opposition to current U.S. policy on this issue may be subject to a reduction in the U.S. aid in the future.  Despite the threat, on December 21, the United Nations, this time in the General Assembly, again voted resoundingly to condemn the policy. 128 countries voted to condemn, 35 abstained, and 21 were absent.  Only nine countries voted in support of Trump’s policy.

Even some of those friendly to Trump’s position regarding the embassy move might find the diplomacy involved here suspect.  One might think that foreign aid should not be allocated on the basis of whether a given country with citizens in need happens to agree with Trump on the issue of the capital of Israel.  Some disagreement should be expected because, after all, internationally, Trump’s policy on this issue is tremendously unpopular.

Some argue that the policy is common sense from a pragmatic perspective.  The argument is that business has been conducted in Jerusalem as if it were the capital for decades, so this policy constitutes a change, not in the way that we actually conduct business, but simply in the way we talk about doing business and ultimately the convenience of our business practices.  Others argue that the United States has long supported Israel, and Trump’s announcement was just one further step in its long policy of support.

There are many arguments against the Trump Administration’s policy.  Two major considerations loom large in discussions of this issue.  First, many have major reservations with, or even outright condemn, the way that the United States inserts itself into affairs in the Middle East.  Though it may be true that Trump is following through on campaign promises with respect to the region, the average American voter does not appear to be well informed about the culture, religion, and geopolitics in the Middle East.  It makes no sense, opponents of Trump’s policy would argue, that a rural voter in Alabama, for example, has any input on what happens in the Middle East, especially when our actions can have such serious long-term consequences.  We should come together to discuss these sensitive topics with open ears and delicate instruments rather than with bravado and power tools.

The second major moral consideration has to do with the potential for violence.  Tensions are already tremendously high in the region.  Opponents of Trump’s policy argue that, from the safety of a podium halfway across the world, Trump announced a policy to score political points at the risk of inciting rage and violence in the actual region at issue.  What’s more, though it is important to realize that only a small percentage of the affected population advocates change through violence, opponents argue that policies of this type have the potential to incite violence against the United States by terrorist organizations.

Finally, it makes people angry that, as President of the United States, Trump feels that it is his place to go beyond making decisions that affect the affairs of his own country.  After all, for the United States, it doesn’t actually matter whether business is conducted in Jerusalem or Tel Aviv.  This doesn’t really appear to be a decision that is ultimately about issues of fundamental importance to citizens of the United States.  At the end of the day, though, a brash proclamation of Jerusalem as the capital of Israel sure looks to the parties involved like pure hubris—a judgment about which religious tradition really gets to lay claim to the region.  The intervention in this most intimate of matters feels to many like a serious personal violation.