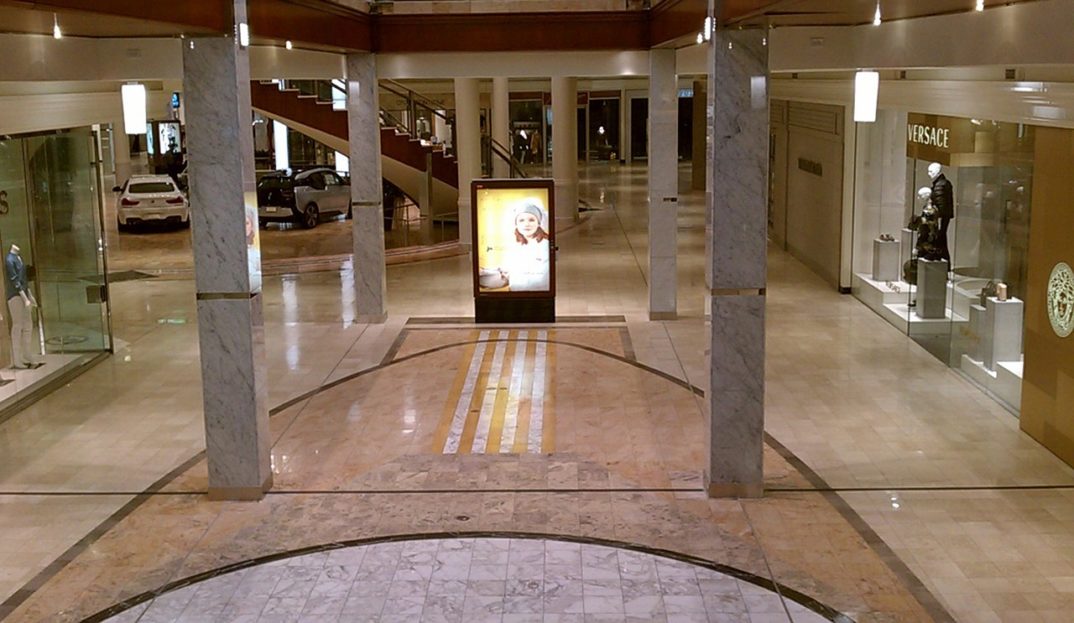 “Mall” by michaelmko is licensed under CC0 Public Domain (via Pixabay)

Throughout the course of 2017, after a disappointing bottom line during the 2016 holiday season, Macy’s department store closed 100 of its locations nationwide.  Gap Inc. announced last year that it would close 200 underperforming Gap and Banana Republic locations, with an eye toward shifting greater focus to online sales.  Shopping malls across the country resemble ghost towns—lined with the empty façades of the retail giants that once were.

The number of physical locations of chain retail stores is dwindling for many reasons, but significant among them is a shift to online sales.  This major change has serious ramifications for our communities.  For many, the shift is tremendously convenient.  Online shopping means, of course, that shoppers don’t have to leave the comfort of their own homes to get the things that they need.  This feature is especially beneficial to groups for whom shopping time is a rare luxury.  People who have multiple jobs, work long or unusual hours or are restricted by parenting responsibilities no longer feel restricted by the hours of operation of the local retail stores.  Online shopping is also tremendously beneficial to members of the community who are differently abled and have a difficult time navigating the complexities of shopping malls and parking lots with ease.  Online shopping is one stop—all you need to do is open your computer and you have access to virtually everything you might need.

On the other hand, there are some downsides to the trend toward online shopping.  This new shopping frontier alienates some groups—groups like the elderly, or low income or rural families who either can’t afford the Internet or can’t obtain it at their home for geographical reasons.  As physical locations close, it becomes much more difficult for groups that either don’t have access to the Internet or don’t feel comfortable with the technology to obtain the items that they want to purchase.  Elderly shoppers may feel increasingly disconnected with the world around them as technology advances so rapidly that it is difficult to keep up.

An additional concern with the trend toward online shopping is that, as our transactions become increasingly impersonal, a sense of community is diminished or, in some cases, even lost.  Many of these losses took place years ago as small, mom-and-pop local stores were pushed out of business by chains and superstores.  Gone are the days when it was easy to purchase a product made by a member of the community from a local store owned by a member of that community.  These losses are lamentable for a variety of reasons, not least of which is that the mass-produced products sold in superstores are often made by exploited workers in less regulated countries under inhumane working conditions.  When products are made locally, it is more likely that we will know who made them and the conditions under which they were made.

Fans of online shopping might argue that the ability to shop online obviates some of these difficulties.  Online shoppers have more options, as do online retailers.  Online shoppers can be selective about the companies from which they order.  If they want to purchase only green products, only cruelty-free products, or only products that were made locally, they can select retailers that share their values in these respects.  These products can often be more costly to produce, but if both retailer and consumer are genuinely committed to the endeavor, they’ll be willing to incur the additional cost.  Perhaps the online system can truly fulfill the promise of those who advocate for the virtues of a truly free-market system—that the supply will be dictated by the demands of the consumer, and that when those demands are ethical in nature, the supply will conform to those ethical prescriptions.

Others aren’t so optimistic about the promise of the online system.  Online transactions, by their very nature, tend to sidestep basic human virtues like honesty and friendliness.  When we interact with people face-to-face, it’s difficult to outright lie to them or to treat them with a lack of dignity.  The same isn’t always true online.  Online retailers can hide behind a mask of anonymity.

This lack of optimism extends to considerations pertaining to the ability of the free-market system to conform to the demands of morality.  Perhaps the real failure lies in the fact that the average consumer isn’t likely to truly carry through with a demand that products are produced ethically—not if they can get a better deal, anyway. It isn’t as simple as a pure choice to throw up one’s hands and say “Forget morality if I can get the product cheaper!”  Many shoppers feel, and many may be right about this, that their income does not actually provide them with the luxury of paying five times more for a product because it is cruelty-free or meets some other ethical ideal.  People need to put food on the table for their families, and to do so they are often forced by the necessity of circumstance to shop online at websites that charge less for their products.  So, at the end of the day, online retail will be dominated by megastores in the exact same way that local retail stores were pushed out of business by the physical manifestations of those same corporations.

The steady reduction of physical stores has an impact on the time that we spend with friends and family.  The goal now appears to be merely obtaining the product, rather than enjoying time out purchasing the product.  Visiting a local shopping mall is something that families often do together, and as stores disappear, there are fewer products all in one place that appeal to a diversity of interests.

Technology expands and changes the moral landscape every day.  Human beings simply must face increased automation and mass production.  Some of this will inevitably be quite convenient.  The real struggle, however, is to retain a commitment to human interaction, values, and community in the face of these dramatic changes.