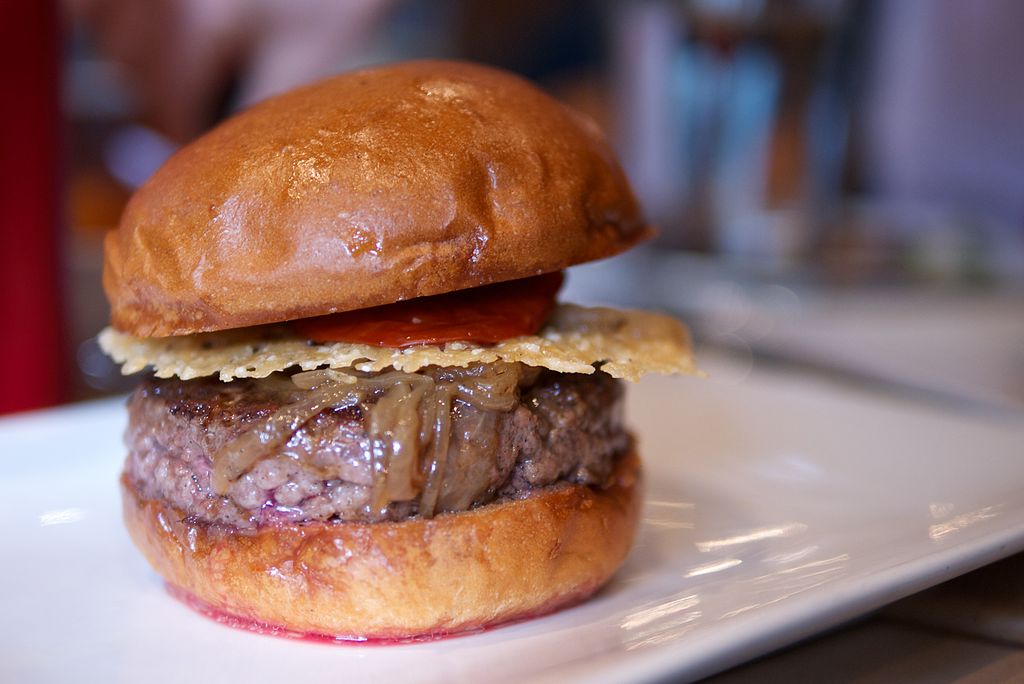 “Umami Burger” by Jun Seita is licensed under CC BY 2.0 (via Wikimedia Commons)

The current dominant method for producing meat is the source of tremendous ethical concern along more than one front.  The interests of animals are simply not taken seriously in the meat industry.  Most animal products consumed in the United States are produced in factory farms—places where animals are treated like mere objects.  In his famous book, Animal Liberation, ethicist Peter Singer describes the some of the practices that take place “down on the factory farm.”  Practices include keeping animals in such tight quarters that they have no room to move around, de-beaking chickens to avoid violence in response to confinement with many other chickens in tight living conditions, and the de-tailing of pigs to prevent cannibalism under similar circumstances.  Singer argues, quite plausibly, that if an entity can suffer, that entity is deserving of moral consideration.  The entity has interests that should be factored in to an assessment of the ethical status of our practices.  It follows, then, that the practices that take place on factory farms are deeply troubling from an ethical point of view.

The way that we currently raise animals for consumption is also threatening to the environment.  Agriculture is responsible for 15 percent of carbon emissions, and a substantial portion of that is related to the production and maintenance of livestock.  Beef farming is uniquely problematic—it requires 28 percent more land to produce, produces 5 percent more climate-warming emissions, and required 11 times more water than other livestock.  If labs can put meat on the table without producing these kinds of risks to the environment, we may be headed toward a new frontier, ethically speaking.

There are also concerns about agriculture management.  A key element of our current practices of raising livestock is feeding animals grains.  But the grains we are feeding livestock could much more efficiently be used to feed starving human beings.  A 2014 study published in Science concluded that we could feed at least 4 billion human beings with the crops we currently feed to livestock. Perhaps a move to lab-grown meat will assist in putting us back on track when it comes to allocating crops responsibly.

Lab-grown meat looks like it might be beneficial for animal welfare, the environment, and in the fight to end global hunger.  Lab-produced meat looks like it might have an additional benefit as well—it may be healthier.  Lab grown meat wouldn’t be host to the same kind of dangerous bacteria, and the meat involved will not have been exposed to potentially dangerous growth hormones.

On the other hand, there are also arguments against the production of lab-grown meat.  First, it is tremendously expensive to produce.  The original Dutch lab-grown hamburger cost $330, 000 to create.  Now, those prices will eventually nosedive.  Even so, opponents of the production of this kind of meat argue that there is no moral justification for spending that kind of money finding a way to satisfy the human craving for animal flesh.  After all, human beings can and do survive and thrive on plant-based diets.  Surely the money spent on a lab-grown burger could have been better spent.  After all that expense, it is far from clear that consumers would take a shine to this product.  Many people are already tremendously dubious of foods that have been genetically modified.  A 2016 Pew poll indicated that 39 percent of people believe that genetically modified foods have detrimental health effects when compared to food that has not been scientifically modified.  If people respond this way to GMOs, is there any reason to think they’ll welcome hamburgers created in labs by scientists?  In other words, though it may be true that factory farms present serious moral problems, it is far from clear that lab-produced meat has any real potential to save the day.

A second argument against the production of cultured meat is that, if a person is truly committed to a cruelty-free (or, at least, cruelty-minimized) diet, satiating one’s craving by eating meat, regardless of how it is produced, isn’t the most pragmatic way of satisfying that commitment.  It would be better to cultivate habits that don’t involve animal flesh at all, so that one is less likely to succumb to temptation when offered the opportunity to eat animal flesh that did involve the killing of an animal.

People tend to be hesitant when it comes to changes to their diets, but it looks like we have compelling moral reasons to change them.  The question is how should we change them?  Should we shift to plant-based diets, or commit to lab-grown meat?