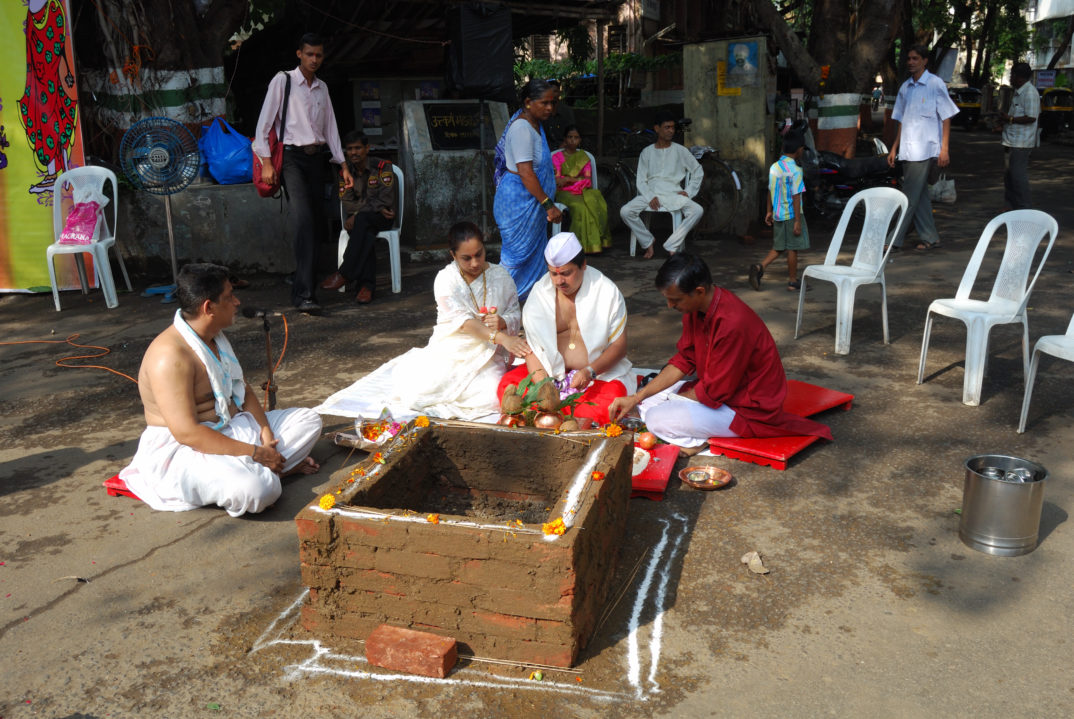 “Navratri” by Ting Chen liscensed under CC BY 2.0 (via Flickr)

In the Indian state of Gujarat, Navratri, or “Nine Nights,” is in full swing with festivals and celebrations to mark the nine sacred days of the year in the Hindu faith. One of Hinduism’s most auspicious holidays, Navratri is dedicated to Maa Durga, with nine days of activities to celebrate each of the goddess’s avatars. However, this Navratri has not been completely tranquil, with a billboard ad campaign causing waves of controversy.  The billboard featured Bollywood actress Sunny Leone smiling coyly, with the tagline “This Navratri, play, but with love.” The slogan is accompanied by a pair of dandiya sticks and the logo for the condom brand, Manforce.

Many are unhappy with the advertisement, some even claiming that it’s unethical for Manforce to link sex to what is often considered a pious religious celebration. The group that took most offense to the advertisement was the Confederation of All India Traders (CAIT). In an open letter to the Minister for Consumer Affairs, CAIT condemned the ad, claiming that the ad was “immature to boost sales by putting all our cultural value system at stake.” After many complaints on social media, Manforce condoms decided to withdraw their Navratri ad campaign.

For the Confederation of All India Traders (CAIT), this is not enough. The organization is calling for the state to formally condemn Manforce in order “to set an example for future offenders.” But was Manforce ethically obligated to remove these advertisements? Can linking sex and religion be offensive? Is using religion to sell a product unethical or disrespectful? And how much does Sunny Leone’s background in pornography complicate this issue?

Would the advertisement be as offensive if it was for coke instead of a condom? In the 1930’s, Coca-Cola was looking for a way to increase profits while rebranding its image to become more of a family-friendly product. And Coke figured out one of the best ways to appeal to Americans was to use St Nicholas. The jolly white-bearded Santa Claus we know and love today wasn’t invented by Coke, but it certainly entered mainstream culture thanks to Coke’s first popular Santa advertisement in 1930. St. Nicholas is certainly a revered figure in the Catholic Church, though he is not necessarily important to the Nativity aspect of Christmas. Some could argue that Coca-cola’s use of Santa Claus has less to do with religion, and more to do with the consumerist and cultural connotation that Christmas holds in American society. Regardless of these considerations, Coke has technically still used a religious figure to sell its products for nearly eight decades, with little to no objection from Christians, or Catholics in particular.

So what is different about the Navartri condom ad? Though Catholicism has appeared to tolerate the use of its figures to sell products, can the same be said about Hinduism? Despite the controversy over the condom ad, billboards using religious symbols and imagery are actually quite common in India. One example is advertisements for laundry detergent around the time of the festival of Holi, in which people throw special pigment on each other to celebrate the beginning of spring. It makes sense as to why companies would advertise their “stain off” detergent, while depicting a pigment-stained shirt turned bright white, presumably after washing.

However, though using religious allusions might not be considered inherently offensive, using specific symbols and idols could be. In 2007, the Hindu America Foundation contested Burger King’s advertisement depicting the Hindu Goddess Lakshmi sitting on a meat sandwich with the slogan “A snack that’s sacred,” claiming the ad was downright offensive. According to the HAF, “An advertisement knowingly and intentionally using sacred symbols, especially those of another religious tradition, for purely commercial purposes can be offensive in and of itself.” The Navratri ad does feature two dandiya sticks, which are used during the dances of Navratri, but the use of the symbols wasn’t what many took issue with.

Perhaps it isn’t so much the imagery of the advertisement that makes it offensive, but the context and implications. Since Navratri is a festival marked by nightly dance celebrations, many young people come in large groups, and it is no secret that sex is extremely common. So common in fact, that parents in Western India, where Gujarat is located, hire private detectives to spy on their children during the festival. Additionally, during Navratri condom sales rise and  Gujaratis are more sexually active, and the rate of abortion in the 1990’s was higher after Navratri than any other time of the year. According to Dr. V Sam Prasad of the AIDS Healthcare Foundation, “Sexually-transmitted infections also rise during this period.” With unprotected sex and exposure to HIV as major sexual health concerns in India, it is understandable why the subject of sex might be a little sensitive. However, some might argue that the advertisement actually promotes healthy sexual practices, by encouraging the use of protection, as well as promoting seemingly consensual interactions.

Greater still might be the fact that the advertisement not only features a woman, but a former adult-film star. Though watching pornography is not illegal in India (producing it remains illegal), it is a highly controversial topic, considering the fact that only two years ago the government attempted to block hundreds of pornographic websites. CAIT criticized Leone directly, claiming that the ad was “The most irresponsible act of its Brand Ambassador, Ms. Sunny Leone.” As a former pornstar, Leone has constantly faced criticism and sexism on social media and during interviews. Some do not believe that Leone and the product she is representing is degrading to women. In an interview with the BBC, CAIT representative Praveen Khandelwal even stated “Navratri is a pious festival which symbolizes the strength of women and linking condoms with the festival is highly objectionable.” It is unclear however, how linking women and condoms is objectionable, and one could even argue that the advertisement might encourage women to buy condoms themselves.

Whether or not it is ethical to use a religion to sell a product might depend on the circumstance and product. While Coca-Cola isn’t necessarily pious, it isn’t unholy. Linking sex, especially unmarried sex, to any form of religion probably won’t pass without controversy. However, in a world dominated by social media, brands seem to be at the mercy of public opinion now more than ever. It might not require CAIT’s requested government condemnation for condom brands to learn from Manforce’s mistake.